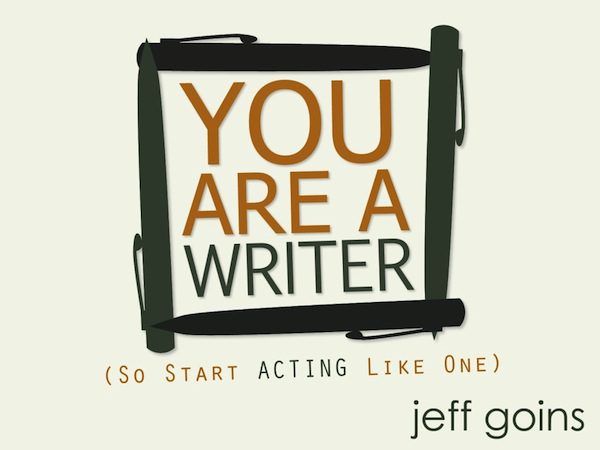 You are a writer, you just need to write: tips from Jeff Goins 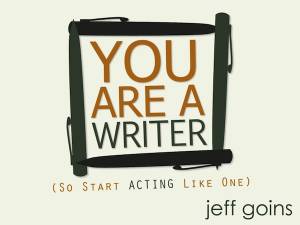 I like Jeff Goins. Although he only came into my radar recently and I don’t know much about him, he makes me feel like I’m taking a calm stroll through the woods, next to a stream. I can hear acoustic guitar playing in the background. Unlike bloggers who stand out for being edgy, tough, or hard-core, Jeff is nice; an image enhanced now that he’s a young father. Jeff is a great example of someone who built up a platform rather quickly, using problogger techniques, and now has his own fanbase that he can pitch book projects to. He’s doing a lot of things right, so you should check him out.

It took me about 30 minutes to read through Jeff Goins’ “You are a Writer, Now Start Acting Like One”. The major theme of the book is “You ARE a writer” – ie anybody who writes is a writer. The difference between writers and non-writers is that writers write, end of story.

Now on the one hand, would-be authors need a tremendous amount of support and esteem-boosting to feel like they are worthy of writing. I know tons of authors who are brilliant, well-educated, and know they want to be writers, but they don’t actually produce anything. This is a common author problem.

So Jeff’s book falls neatly into a much needed category: author inspiration/motivation.

What is a writer/artist?

But wait – isn’t there some distinction to be made between professionals and hobbyists? Doesn’t skill or talent factor in at all? I may be the worst writer in the world. Maybe nobody will ever read my stuff. Maybe I’ll never get any better. Should I call myself a writer, even if I never make any profit from it? Is profit even important?

This debate actually stems from the beginning of modernism, when artists and writers (after a period of a few thousand years) suddenly stopped being paid craftsmen, and started being something totally different. DaVinci was a craftsman. He was a damn good painter; but he painted what people commissioned him to paint. He wasn’t exploring himself, or listening to his inner child, or following his own life’s passion – art was his job.

At the beginning of the 20th Century, Klimt and his gang in Vienna decided “To Hell With Profit”; we are no longer going to learn the skills of academic painting. We’re just going to explore and do whatever we want. Those artists learned very quickly, however, that art painted for oneself with no consumer in mind was very hard to sell. They single-handedly invented the expression “starving artist” and “art for art’s sake.”

Jeff Goins invites you to be a writer and shares the strategy of building your own platform: be helpful and generous. By inspiring people to be writers and giving how-to tips, Jeff has become a trusted expert and resource in a hot field, where millions of people hope to write and get published (and get famous and make money).

But there is a huge and crucial distinction, an amazingly impassable difference, between Jeff and almost all other indie writers:

Jeff is using the basic strategy of online marketing: Find out what people want, and give it to them.

Meanwhile, the vast majority of indie artists and authors start with doing whatever-the-hell they like; writing what they enjoy, writing fiction. “Real Art”, cultural ideology leftover from the modernist movement tells us, is not a product to be sold. We are supposed to follow our passion, market be damned. So artists paint and authors write. Then they promote the heck out of whatever they’ve created, trying to find their audience after the product is created.

Most of Jeff’s advice for writers will only apply to non-fiction writers who are sharing useful information of value. Building up a blog, publishing articles, networking, is all much more difficult when the only thing you’re writing is novels and short stories. If you want to be a writer who writes about writing, or you want to be an internet marketer/entrepreneur who writes about starting your own business and finding financial freedom, the path to success is straight and clear.

But the path to success with your trilogy of paranormal romances is less obvious.

The takeaway tip from Jeff Goins’ book is “writersship” (courtesy of Seth Godin), but even here it’s obvious he’s talking about developing and finishing a high quality product for consumption. Of course he’s exactly right; to be a successful author you have to be a businessperson:

“You are going to have to be a marketer, an entrepreneur, a talented salesperson. Because this is a business. If your art is going to have the impact you want for it, you had better learn the tricks of the trade — not so you can become part of the system, but so you can start changing lives.”

And yet, at the beginning of the book, Jeff records how he started out trying to do all the business/networking stuff, writing for others, but gave up and started writing only for himself and having fun with it… which led to his growing fanbase.

So which is it? Luckily for Jeff, he’s writing about topics that there is an enormous demand for. But what if you’re a novelist? What if you’re a historian? What do you write about?

Are you a writer, or not?

I spend a healthy portion of my day writing. I’ve published a 150,000 word research books, which was an incredible amount of work, and I’m pretty proud of it. But I don’t call myself a writer. Why not?

1) I think calling yourself a writer even before you’re doing it professionally is a bit precarious somehow. I know people who call themselves writers but they really make pizzas. They’ve never published anything. But calling themselves a writer is sexier and makes them cool. I agree with Jeff about taking yourself seriously and believing in yourself as a writer, and I also agree with him about putting in the time and doing the work – but maybe being a writer is something that grows with experience.

When you say “I’m a writer” people will assume you mean “I’m a good writer” – which may not be the case at all.

2) Being a writer lets you identify yourself as outside/apart from the system… someone touchy feely, underappreciated, ignored by mass consumer culture, like a tragic Van Gogh figure. Writers are supposed to be ignored, right? If you identify yourself primarily as a writer, then you may not listen to criticism and negative feedback, because you just think other people don’t get you, which makes it difficult to improve. A real writer (for me) is someone who hones his craft, who studies writing, who reads lots of books about writing, who gets better, and eventually who publishes (self-publishing is fine), and perhaps, someone whose books are enjoyed.

I realize this may be idealistic… but the reason we accept labels in any other profession, is because they define the person as “good enough at something to make a living from it.” Hence a dentist may not be very good, but he gets enough clients anyway. If a chef cooked too poorly, he’d get fired, and no longer have the title. The answer to “What do you do?” is not what you want to be doing or what do you enjoy. People are asking “How do you make a living/what skill are you good enough at that people pay you for?”

Jeff Goins says that people who write are writers. But there is an enormous gap between the millions of people who are writing, and those few who become successful writers. Do they all have the right to be called writers? Are writers the dreamy poets who create for themselves, or are they the smart marketers who find out what people want, and give it to them? These are two fundamentally different approaches to writing. Which is the *right* way? Obviously it depends on whether you want other people to like, and/or to pay for, your writing.

This weekend I had the chance to talk with Jeff at World Domination Summit 2013 – I also discovered that in the community of WDS, it is perfectly expected to define yourself according to what you want to be doing. Hence I learned to say, rather than “I’m a PHD Student”, the thing I want to be known for, which is “I help authors and artists improve sales.”

Just defining myself this way steers my relationships with people in the direction I intend, and pushes me (almost forces me) to live up to my word. So perhaps when you say “I’m a Writer” you are similarly forcing yourself to go out and make a living from writing, because that’s what you’ve led people to expect about you. Understanding it this way, I feel that Jeff’s book is probably much more insightful than I gave it credit for.

What kind of writer are you? What did you think of Jeff’s book?