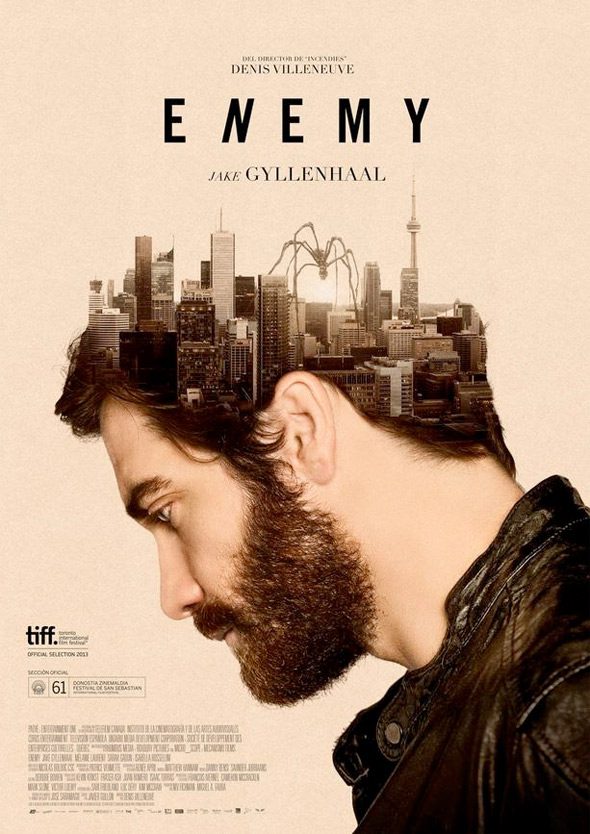 Why you should end all your books with a big spider (lessons from Stephen King and the movie “Enemy”). 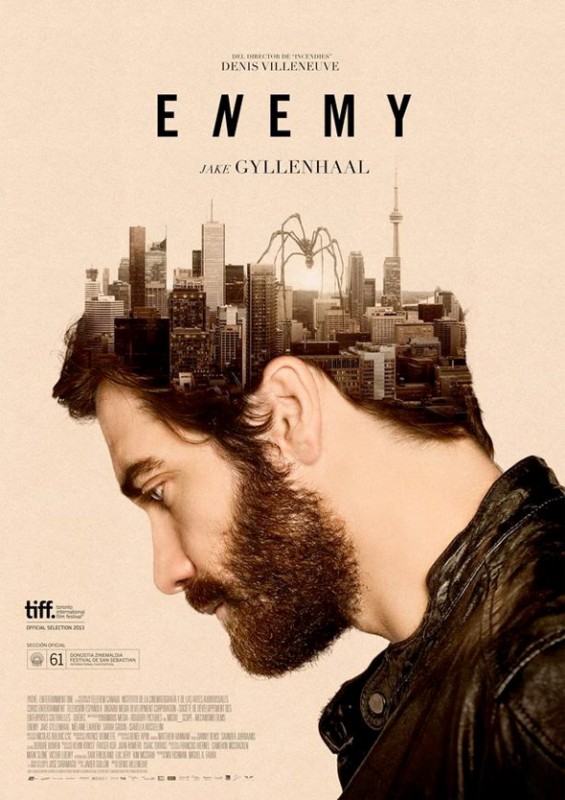 Last night I went to a live art party (the painting didn’t go so well, but I’m not finished.)

The 3 sketchy Pina Coladas I drank left me a bit hungover, so this morning (after lying on the cold floor for a few hours) I searched for movies I could download. I found the 2013 Enemy, which I didn’t know much about.

Starring Jake Gyllenhall, Enemies’ short description is “A man seeks out his exact look-alike after spotting him in a movie.” But that doesn’t nearly do it justice.

Enemy is bizarre and creepy. Kind of like Black Swans meets Steven King’s It.

But here’s the thing…

The movie starts around a mystery – an impossibility.

The people they know can’t tell them apart (except by personality).

Both men try to find logical explanations – there aren’t any.

They even have the exact same scar.

The plot thickens quickly as the rich, arrogant actor version (Antony) decides to use the opportunity to cheat on his wife with his double’s girlfriend – he bullies the meek, poor college professor (Adam) into giving up his clothes and car to help with the farce.

Adam goes to Antony’s house but is too nervous to do anything with his wife.

The wife, however, realizes the two are not the same and prefers the new one.

She wishes he could stay.

Meanwhile, Antony gets discovered, when the girlfriend notices the ring-line of the married guy and freaks out. He drives her home. They fight. The car crashes and we assume, they both die.

That right there, is a very tidy short story in itself. Believable even. We can almost ignore the nonsensical situation from which it developed.

It could be a rich vs. poor metaphor. A switched at birth story, like Rushdie’s Midnight’s Children.

But there’s more to it.

There are strange, underground sex events where elite members get invited with a special key, like Eyes Wide Shut.

There are the professor’s strange dreams and his shaking hands – maybe he’s schizophrenic like Russell Crowe in A Beautiful Mind.

A book would eventually let the reader know what’s really going on.

All the loose ends would tie up, so everything makes sense.

But in the movie, the darling pregnant wife of the rich actor suddenly becomes a huge fucking spider.

And, as I’ve learned, there are no spiders in the actually book, so the directors have taken big liberties.

Steven King’s IT is basically the same thing; a mystery with unresolved questions that ends suddenly with an arachnid.

Why is a mean clown killing kids? OH – it’s a giant alien spider. I get it now.

Except King goes too far in the explanation, and the graphics in 1990 were laughable, so the giant spider scene plays out like bad sci-fi. Whereas, in Enemy that giant spider is terrifying.

Forrest Wickman discusses how the spider symbolism is tied to authoritarian states and control mechanisms in  this Slate article, a subject the professor is lecturing on in the beginning of the film; so as a whole the movie may be saying, “Wake up! The Man is stealing your jobs, your clothes, your cars, your girlfriend… and you are just giving it all away! When you think things are getting better and you’ve traded up for a nicer apartment and wife and baby, it’s even worse – now you’re really caught in the web!”

But it could also be a battle between the conscious, rational mind (Adam=Ego) and the irrational, unrestrained subconscious (Antony=Id)… Antony gets a little out of control but Adam finally destroys him, not realizing he’s destroying himself as well.

OR: it can be a metaphor for corruption – as soon as Adam takes Antony’s place, and gets that special key (the invitation to the sex party) he’s thinking about leaving his new wife alone and going to the part. Given the new temptations that come with his wealthier lifestyle, he will lose himself and become the monster that Antony is.

The point is, it’s too easy to explain things away with aliens or schizophrenia. Sometimes, to create something brilliant, you have to step outside the boundaries of the possible and consider the impossible. Sometimes, for a piece of art to meaningful, you can’t fill in all the blanks.

You need to give some room for the readers to ask “But what does it mean?”

The lesson for writers

All you need to do is create a situation full of conflict and tension, and probably some mystery.

Present readers a puzzle and they will follow along.

If you don’t have the answers, push off the deadline by saying this is just the first book in the series.

Or throw in a huge spider and cut the cord.

People may hate your ending – but at least they’ve read the whole book!

On the other hand, if 95% of your book is great, the ending doesn’t matter all that much (you’ll get negative reviews, but people will still buy it and discuss it).