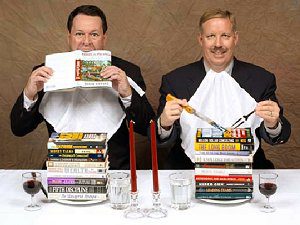 I used Kickstarter on my first non-fiction book.

Here is how it works: you basically promise a copy of the book and any extras.

You give bigger/more fun prizes depending on donation amount (these aren’t really “donations” – people expect to get something in return). You can include personal stuff like “10 of my favorite CDs I listened to while writing the book” or “I’ll personally cook you dinner!”

You could give out swag or posters of the cover art, or cool genre-themed merchandise. Shop on Etsy or Alibaba for cool presents to gift. Make it fun and awesome.

I don’t recommend it though…

As in, crowdsourcing your book is a really bad idea.

It’s mostly just asking your readers to fund your publishing for you.

And if you don’t have any readers, it’s just asking your friends and family to fund your hobby.

Authors think they’ll get new readers or get discovered on Kickstarter – that rarely happens. You might pick up a few. But not many. And even they support you, they aren’t sharing or signing up to your list.

And publishing doesn’t really cost that much.

You’re basically asking for a loan, to pay for editing and cover design and formatting services, and people get the book later… which they may or may not even like (or really want).

Don’t start off your publishing career by asking for favors.

You want to do more giving than begging for help.

It COULD be fun to do if you have a big platform and support already (a very successful Kickstarter campaign is good marketing… a failing one you need to keep promoting is desperate).

But even then, I’d much rather ask them to buy the book on Amazon.

You’re cannibalizing yourself by getting them to preorder outside of Amazon.

You could just offer them those prizes if they buy on Amazon, which will actually boost your book to new readers. By getting them to “prebuy” or pay for your book outside of Amazon, you’re losing out.

When your book finally launches, you’ll have nobody else in your network who wants to buy it.

Not to mention you’ll have to ship copies out to everyone, which is a pain in the ass.
After that you’re at zero… trying to figure out how to get people to buy your book, doing all your marketing all over again, which won’t be effective because everyone you know already bought a copy on Kickstarter.

That’s a recipe for a failed book launch.

INSTEAD of Kickstarter, you should be doing a prelaunch campaign like this one by Tobie Easton.

Get people to pre-order your book on Amazon for a chance to win a big prize; or for a free gift or service or something. I’m going to try this out soon with my audience and have some fun with it.

I purposefully didn’t “sell” or market my first novel to my audience (which is mostly authors), because I don’t want to cross promote. But I CAN offer free editing, cover design, marketing and a bunch of other cool prizes if they preorder one of my books.

If you’re doing a giveaway, you can use Gleam to get people to also like/share… I like using it for specific things like adding my books to Goodreads, following me on Wattpad, etc.

Someone pointed me to https://publishizer.com. I have’t had a chance to check it out myself. It has a cool feature, in that it says it will automatically submit your query to agents. So you upload your materials, get people/supporters to fund you, and also submit to agencies. Which might be kind of cool. I still think you’re eating out of your own momentum, and you should direct all sales to Amazon instead of preselling this way.

But I’m also assuming that you have funds to do so.

If you don’t have any money, I would still caution you against asking all your friends and family for money to help you publish. Why the hell should they? If they said, “hey I’m going skiing, can I borrow $20?” You’d probably think they were being rude. You might think, get an f’ing job and pay for your own hobbies.

If you have an audience eager to support you (because they love your work, not because they know you personally), then crowdsourcing your book might make a little sense… if you don’t have enough money to get it done yourself and your audience wants to support you. But I’d rather use a credit card, pay for everything myself, and get them to buy the book on launch day on Amazon, to spike my sales. Otherwise, you might have a very successful book, as in, you raise $10K and spend it all on a book, and fulfill all your campaign promises. And maybe make a little bit of money. But you’d have to keep doing that, every few months, and it wouldn’t earn a lot of money, and it would be too much work.

You want to be building a products that sell on Autopilot. You want books that stick and earn revenue long term, without work. Because otherwise, publishing books doesn’t make any sense, and isn’t a good way to earn money.