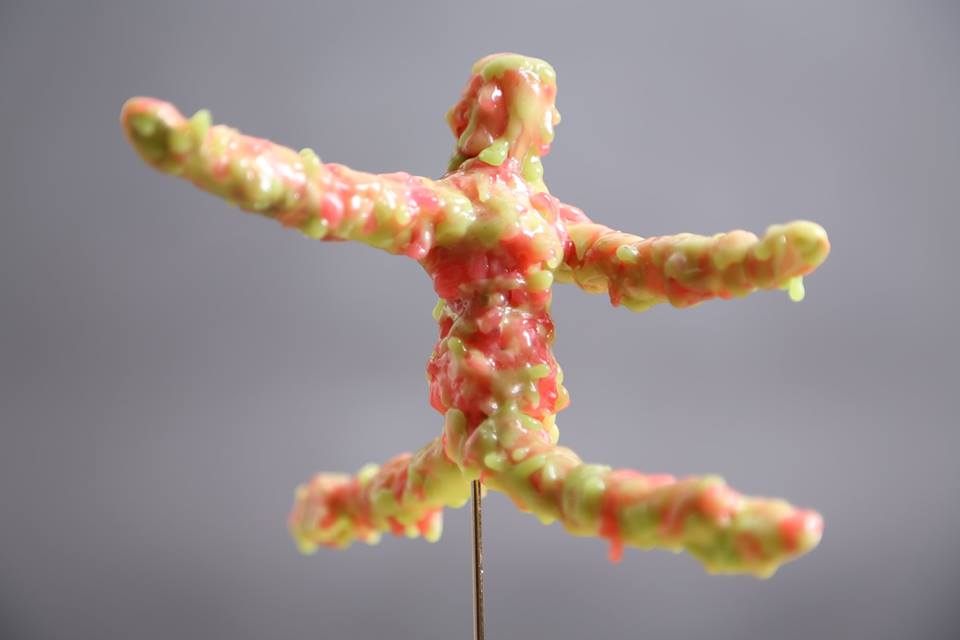 Why I hate fine art: lessons from the Taipei contemporary art scene

I tried to make it as a fine artist for several years. I climbed up the ladder. I networked. I even got into a few high-brow galleries and sold some work. But then I quit – because, although there’s the potential to make a huge amount of money for something mediocre that didn’t take long to produce – it just felt too much like bullshit.

“Fine Art” is basically just an institutionalized practice that takes a piece of creative work, defines and explains it with cool-sounding philosophical jargon, then mounts, frames and displays it in an amazing setting, so that you can convince somebody it’s worth much more than it really is.

The price of a piece of art does not equal the value of the artist’s time or the base materials. The bulk of the value is in the piece’s meaning. Which means the artist, the gallery and the sales representative are all meaning–fabricators.

They increase value by building, assigning and explaining meaning to buyers in a convincing manner.

If they do this well, they make the sale.

Even if the art isn’t beautiful, attractive or aesthetically pleasing.

Even if the art is simplistic, boring and/or looks like a pile of trash.

There are brilliant Taiwanese artists. I have some favorites.

And then there’s a lot of stuff like this: 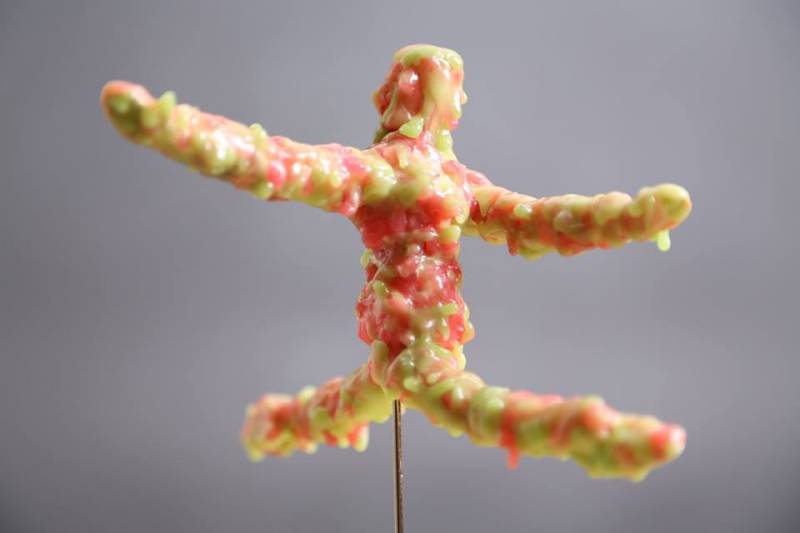 The waxwork preserves the delicate human’s facial features and expressions. By means of making waxworks, the ballet movements can be perfectly preserved forever as the classic artworks. 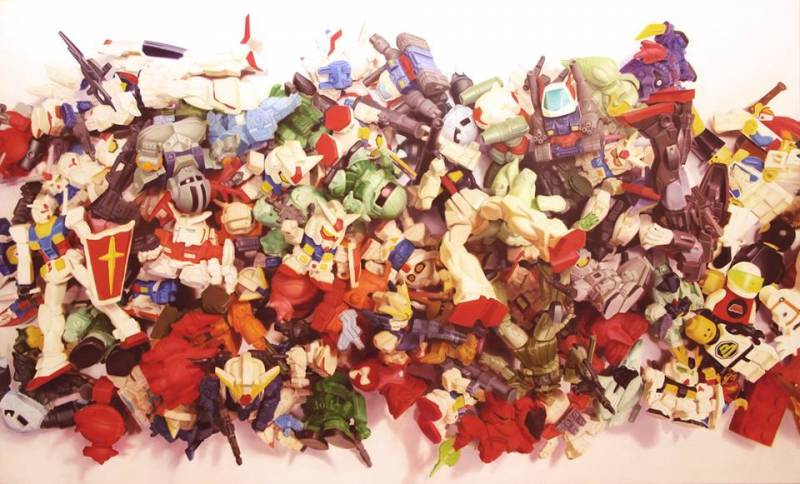 One can be mentally pulled out of times of high tension or time consuming conflicts through indulging in the magical and timeless world of one’s own imagination and collection. Where this unrestricted and beautiful realm offers a sense of security and escape, eventually becoming bound to one’s own private world.

As a graffiti artist, (the artist) has traveled around cities since 1999. He tends to use the smallest dots and colors to express concrete forms, looking for different permutation combination images within continuous squares. His artworks simply evoke the memory of visual shock caused by 8-bit Console game. 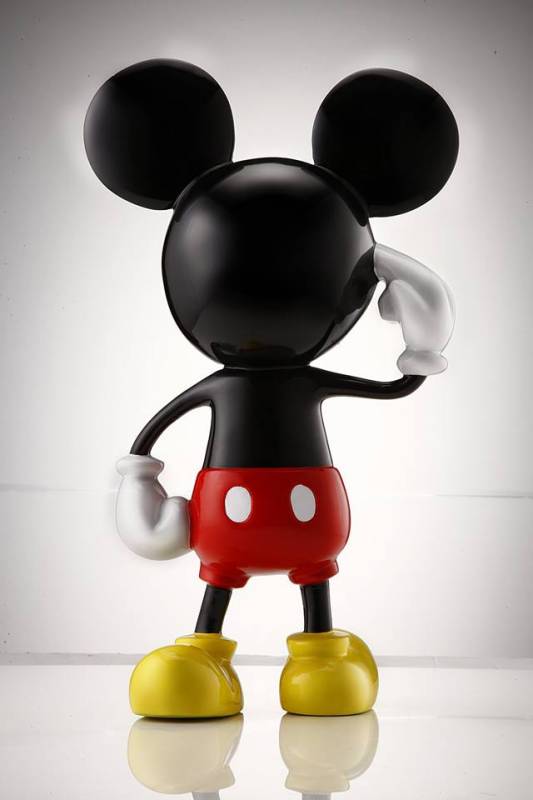 Expanding from self initiation on figure creation as a statement, “Figurehead” investigates the ideology of figures. The artifacts in this particular exhibition varies from figures in mangas to religious icons; the purpose is to question ourself how we reacts upon figures; whether it being physically worshipping, or being an abstract soul salvation? 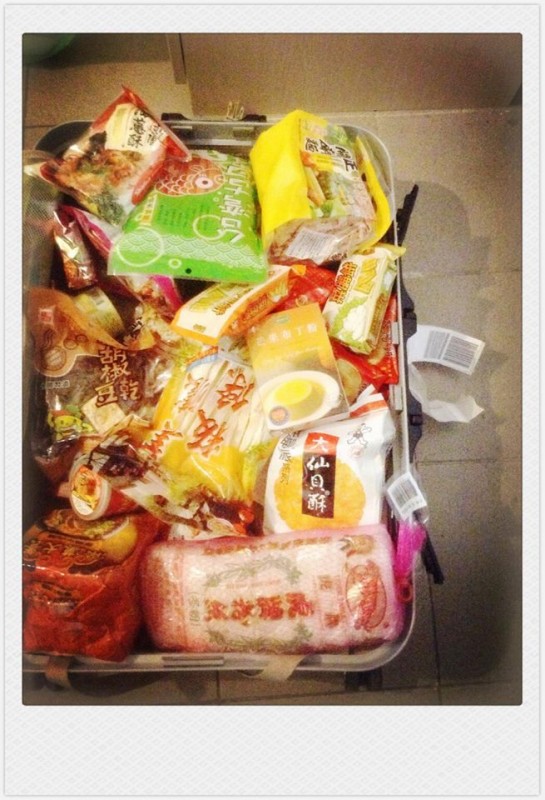 Just kidding…. this one is just some food packages in a suitcase.

I think I could have made it…

Fine art is mostly about confidence and making things that fit what’s already popular (of course, it SHOULDN’T be – but it often is). Just like publishers, galleries look for what’s already selling and seek out something similar that they know their clients will like.

When I stopped doing art a couple years ago I was doing stuff like this: 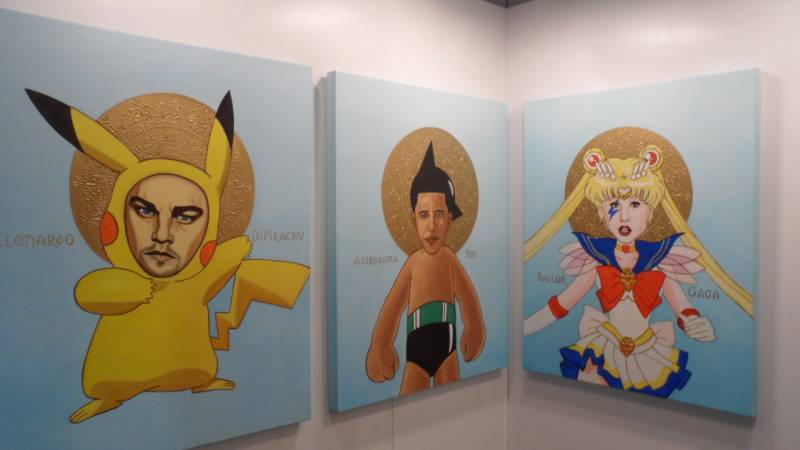 I wrote a long philosophical treatise on the purpose and meaning of the work (I have a BA in philosophy, I can “fine art” with the best of them!) Actually it sounded a lot like the Mickey description above – they might have copied off mine.

People loved it. I had a solid wall of guests blocking the entrance to my booth for three days. Unfortunately I didn’t price these, I could have picked a price and done pretty well (I should have had prints prepared also…)

But it didn’t feel like “Art” to me – I used to paint things that were meaningful. Then I started painting what was cool/what the fine art scene in Taiwan respected… which meant bright, fun pictures of toys and cartoons.  They were the right stuff but I couldn’t sell them for a lot of money myself, because I didn’t believe the BS.

I couldn’t make myself believe it – even though there were other works of less quality that took less time to make… believing anybody should buy it for a small fortune and not feeling like you’re ripping them off… that’s I trick I haven’t mastered. Maybe that’s why most art is sold by professional dealers rather than directly by the artist.

Why  is a piece of art so highly valued. Because it’s unique? As an investment piece? Real art records a specific mood and period in history, by someone intimately associated with that movement. Most of the stuff being churned out these days is play.

Wax on a stick? A pile of toys?

If I’d stuck around, my next plan was to get a bunch of 2nd hand toys and build them into an awesome sculpture. It would have been amazing. It would have been popular. Like the 2nd picture but way more interesting and time-intensive. But hey, why spend a lot of time on a piece, why paint or sculpt, when all you have to do for fine art is mount some toys on a wall?

Why do that? I could buy 10 iPads and mount them on a wall. Is it art? Sure why not – if I did it I’m sure it would be a huge success, but only if people believed that I BELIEVED it was fine art.

Intention is everything. If I did it as a casual joke, they would think it’s dumb. If I did it as ART and wrote a smashing essay about it, I could sell it for 50X the value of those iPads alone. Why?

A big Mickey Mouse statue? First of all – I got a ‘cease and desist’ a couple years ago from Roxio while working on an amazing Steve Jobs+Angry Birds painting. And I can’t set up most of my paintings for print on demand posters because they violate copyright laws. But half of Asian and Taiwanese art feature famous icons, cartoons and characters. So they’re probably illegal. Doesn’t seem to matter to anybody here.

Second of all – it’s a big Mickey Mouse statue.

I don’t care about the “meaning” or how hard it was to produce.

Do you want that in your house? It’s obnoxious and out of place anywhere except in Disneyland.

I’m not done yet…

I haven’t given up on art. I don’t think I’ll waste as much time painting (which is slow and difficult) if I can do something much easier with better results  – like flat 2D stuff instead of realistic oil painting, which is freakin’ hard.

I have all the technical skills and the right background to create a piece of “fine art” – including meaning-generation.

But the next time around I won’t be timid or play it safe. I’ll go big. I’ll focus on MAXIMUM return on investment. Maximum exposure, maximum sales. I’ll spend a few weeks making the products, put together an amazing exhibition and make a quick 5 or 10 grand.

There are two games in town:

The first is self-representation. You sell for lower prices, but you can still make good money selling your own art directly to clients. It’s easier. You build up your fan platform and let them know when you have new stuff. You produce a lot.

The second game is the art gallery route – this often takes years of preparation and networking, and you often have to have a background in art (an art degree) before people will take you seriously.

Since this is basically “The Emperor Has No Clothes” they don’t want outsiders who will tell them they’re really naked (it’s just a damn painting – how can it be worth so much money??)

So they are cautious and selective. The insiders “get it”. It’s kind of like a pyramid scheme or the stock exchange. Will it appreciate in value in 20 years? Will it sell for double the investment value? Really?? Nobody can make that call accurately.

I’ll post my experiments in both games on this site as I do them over the next few years to help other authors produce and sell art, so stay tuned!

I know this is a touchy subject… if you’re from the fine art world and think I’m misrepresenting, please share your comments.