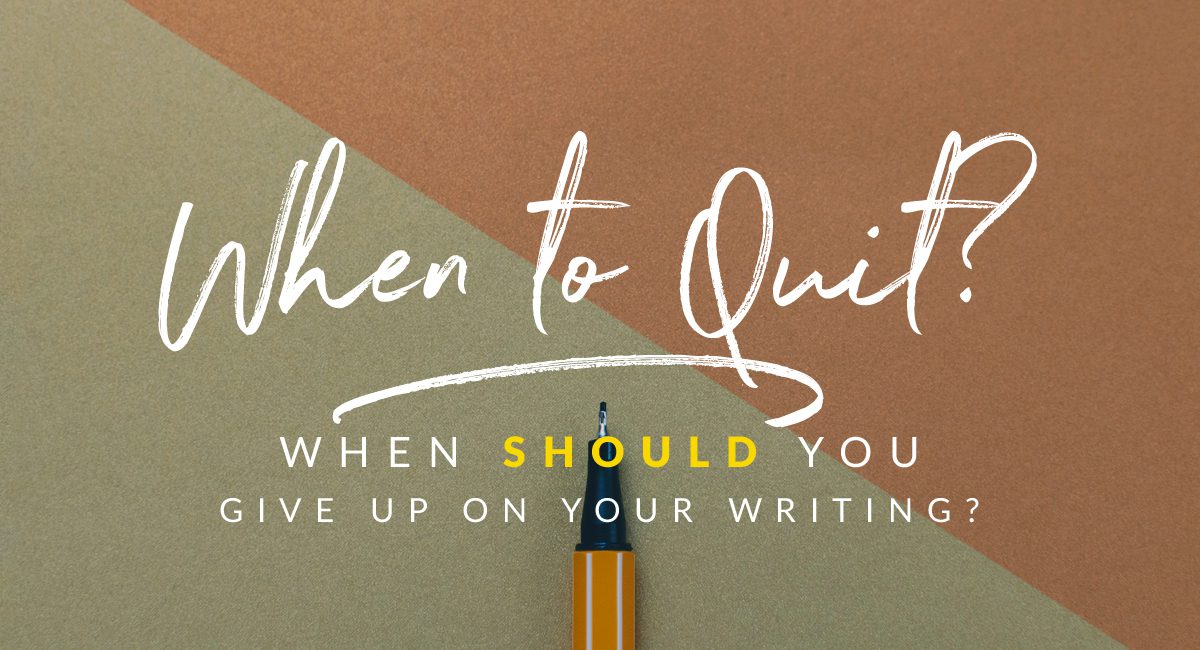 When should you give up on your writing?

I’ve been thinking about writing this post for awhile, but just saw this letter on NYMag’s Dear Polly section from a middle aged author struggling with her declining career, and the response is basically the world’s worst advice to writers.

Even worse, it’s exactly what all authors and writers keep repeating and telling each other. And it’s well written. Which means everybody else will be sharing it because they love it – and they love it for all the same reasons the advice will destroy their chances at success.

In short, the writer, who signs herself off as “Panic and Dread” – hates to complain because she’s published some books and makes a living as an author already, so comparatively, she’s doing pretty well. But her book sales are stagnant. She’s trying to fool around on Twitter but can’t get followers.

“Writing is about connecting with readers. Why can’t I connect? I’m honest in my work. I try hard. What am I doing wrong? What am I missing? The New Age advice is walk confidently in the direction of your dreams, and the road will open up before you. I feel like I’m just walking in a circle. Polly, I’m tired of walking.

She’s basically looking for excuses to give up. What she needs is:

A) Someone to review her author platform, website, book covers, and see why her books aren’t selling. Are they ranking on Amazon? Is anybody seeing them? If not, do some content marketing to build sales. Drop the price. Give one away for free to build an email list. Marketing isn’t hard, it’s just that the things most authors are doing don’t work (and nobody is giving them REAL advice about how to FIX declining sales).

B) To find and connect with her readers; to get them on an email list and communicate with them. To build relationships with other authors in her genre. To boost traffic directly to her site. She needs control over her audience, not to be fighting for attention on social media. 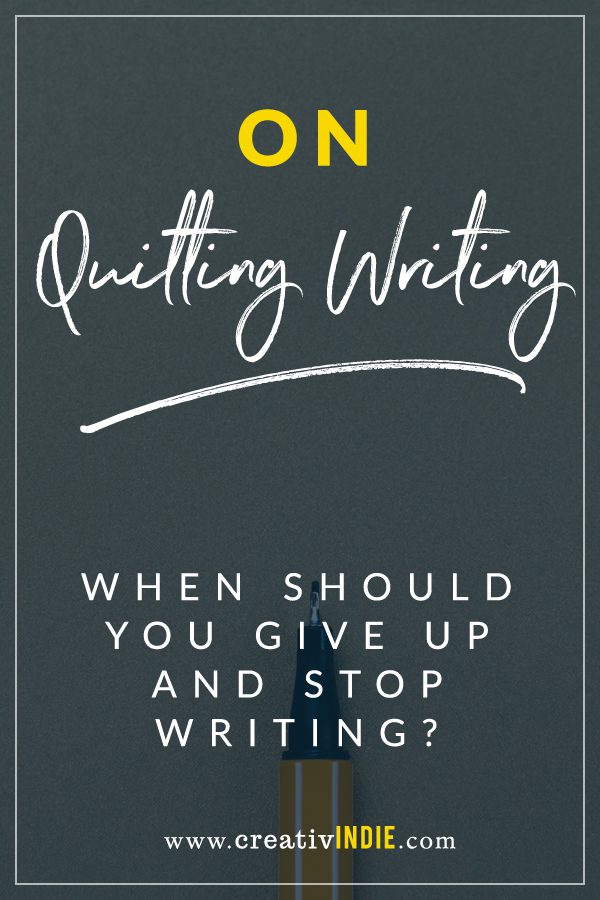 A convoluted reply about art and the purpose of life. I’ll pull some sections out so I can add my response.

#1: Success is an illusion

The first response is, that every author hopes for “more” but “breaking out” doesn’t really mean anything; why does the author want to break out or be more successful? What’s the point?  It’s all relative. Plus…

If you’re a writer or artist or creative person and your work is an arbitrary means to an end, you will not bring enough raw magic to your work to stand out from the crowd.

Which means, any creative person who is working to please the crowd is doing it for the wrong reason, a means to an end, and…

#2 Passion is all it takes

The article gets a little confusing here but seems to say that successful people who make it do so because they’re enthusiasm is palpable. They do it for the love of doing it, not for any accolades.

Those are people who do the work they love passionately, who bring the full force of their personalities to every project, and the world embraces them with equal passion. Those are not people who are trying to “connect” with some imagined audience.

I get that this is a nearly universal empowering belief for creative people, but I’m sick of hearing it, because it’s SO RARELY true. In fact, passion does not equal success, nor does it equal talent. The opposite seems to be true: both the author and Polly, in her response, lament how other people are writing shit and making a killing.

Other people are writing popular stuff that people are actually buying. They don’t have a problem breaking out or making a living. They have the success that these writers covet… but these writers aren’t willing to do the things they consider beneath them!

Instead they feel persecuted because they aren’t getting the rewards for their writing that other people are getting with “worse” writing, and so they think the choice is to give up or quit. It isn’t.

#3 Writing can’t be a popularity contest

Polly goes on this long rant, basically arguing that creative people should only do what they want to do, and shouldn’t try to be popular, and shouldn’t think about external validation or recognition:

Writing can’t be a popularity contest, and popularity doesn’t add up to much anyway, beyond the ability to pay the bills. There are lots of really popular self-help and advice writers out there whose work is — Well, I would rather carve driftwood sculptures than adopt someone else’s winning strategy for connecting with readers. Advice without rage, advice without longing and despair in the mix, advice through a Vaseline-smeared lens, advice that sounds like ad copy or a douche commercial: NO. I have to do what I do, even if the world decides it’s worthless. I have to follow my own compass and give it my best and hope to connect. I have to carve messy emotions into a useful shape that feels inspired but not reductive.

That’s the common advice people give failing artists and writers. But it doesn’t answer the questions creative people are actually asking. Sure it’s fine to do it for the love of art or writing, when you’re young. But after you’ve been doing it for twenty years, you have to start thinking, “Why does nobody give a shit about my work?”

The answer is, creative people are taught not to give a shit about other people.

People like to tell writers to just do it for personal pleasure and not care whether people like the work. So writers write for themselves only and then complain because other people don’t care about their writing.

The truth is, writing is a popularity contest. So is art. So is any creative activity. You are making things, and you’re trying to make cool things. Things other people enjoy. If they don’t enjoy them, you cannot expect to make a career out of what you’re doing. (Is art really art if it doesn’t matter to anybody? What is art then? What is literature? Does a book count as “good” if nobody is reading it? If so how do we qualify “goodness”, if it is unrelated to the reception of the work?)

Seth Godin says – and I agree – that art has to be about connection. It has to be a dialogue. It cannot only be the creative process alone, cut off from the response.

People get confused because they think in terms of quality, so they say that those really well-written literary novels that failed miserably and lost the publisher lots of money are “better” than the pulp fiction vampire romances that are obviously garbage. But they go further than that, and they keep writing those “better” books while refusing to write books with more popular appeal that more people would like.

Making a living as a writer is a numbers game.

Popularity doesn’t add up to much anyway, beyond the ability to pay the bills…

Huh? What? Popularity means people know you and like your work. And it also pays the bills and earns income. Those are both really awesome things. If you’re a writer, you should try to get more of those things. Instead, everybody is telling you to shoot for LESS of those things, by hinting that “real, high quality work” is necessarily done for no audience, and that neither popularity nor financial remuneration for the time you spend working should be expectations for proper artists.

Which is exactly why most writers are writing books nobody wants to read, then feeling frustrated by lack of obvious signs of success, and then asking whether they should just give up. But they don’t. They just sneer and become jaded against all the idiots would won’t buy their books:

You can’t try to “reach” some imagined mob of dipshits, molding your work to match their dipshitty tastes.

So they just keep writing books nobody is reading and wondering what they’re missing. I love this quote from Derek Sivers, which is simple and cuts to the heart of what it takes to be successful at anything: people have to love what you’re doing. 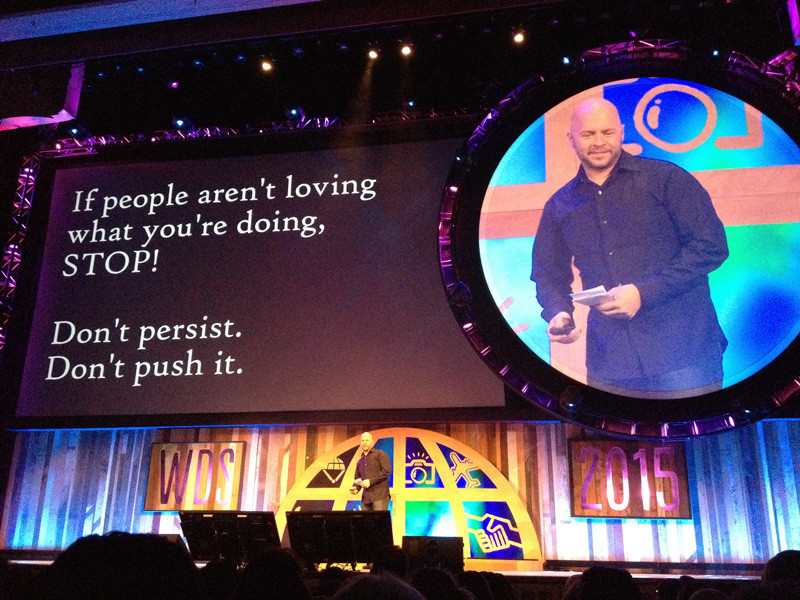 If you are writing books that nobody is loving, the problem isn’t the world, the problem is you. You are choosing to write books nobody wants to read, out of allegiance to an ideology of creativity that was born a few centuries ago with the romantic poets and came to a violent fruition with the futurists.

Polly says nobody deserves success. All we deserve is to work really hard at what we love.

We don’t deserve MORE, you and me. We’re lucky to be writing for a living. So what do we deserve? We deserve to work really hard at what we love. That’s a privilege. We deserve that.

You need to make a choice for yourself.

Do you want to work really hard and love what you do but never make anything that matters to other people? (Isn’t that just a little selfish?) Or are you willing to consider you may need to find an audience who can support your creative passion, and make relationships with them, and find what value you can bring to their lives?

If you’ve had some success, and you want more success, the advice you’re looking for isn’t “don’t worry about success, just write for yourself.”

So stop reading advice like that! It may make you feel better, and allow you to keep doing more work… but that work still won’t produce the results you want, because your ideology about what it means to be creatively productive is sabotaging you from doing work that matters.

If all that inspiring advice has made you feel warm and fuzzy but never gotten you the results you want, it’s time to try something else, which is this: