What should you do with your life? How to pick long-term goals that matter.

This has been an interesting week for me. It’s snowing in Oregon, I’m nostalgic; Obama just gave his final speech. The future is uncertain but we need to decide the world we want to live in and take action to make it a reality. 2016 was a year of big wins and first for me, but a lot of it felt slow and plodding. I was basically just trying to hold everything together.

2017 feels like my breakout year. I’m done with my PhD and can finally focus on my writing, my books and my business. I feel like I know what I’m doing know and can start seeing big results. I’d already set some big goals, but the numbers don’t seem real unless you apply them specifically to benefits that you hope you can bring into your life. That’s been my problem for several years. I make enough for my wife and I to travel full-time. We have complete freedom. Maybe not any savings, but that’s common of my generation.

However I also recently turned 37. I’m not feeling old yet, but I will when I’m 40. I like our nomadic lifestyle most of the time, but it’s hard for most people to get it. And travelling all the time without having our own homebase can be taxing.

Living out of hotels and air-bnb rentals makes you feel like you’re always in someone else’s home. It would be nice to have one of our own. However, we’re also not interested in living in one place forever; and if I buy a house, I don’t want a “normal” house – those would be boring. We don’t *need* a home to live in.

Something I am very interested in, however, is building a community space in nature where creative people, artists and authors can come to do their Great Work, and get coaching and business support, not to mention connect with other people working on similar goals.

I was planning on doing this in a castle.

I still plan to rent castles for awhile to do writing retreats, because it’s great for my platform. However, we learned a lot renting our first castle in 2016. People love the dream of the castle, but few people can actually come. Most people don’t have the flexibility to take a month off, and getting to Southern France was expensive, even for digital nomads already in Europe.

It was also too soon to run my first high-priced event. I don’t have enough brand currency. It went great, and I’m happy we did it, but if I do it again I want it to be much easier.

Much of that will be fixed with reorganized pricing and a better website. Now that we’ve done one, I can add pictures and testimonials. It’ll be a lot easier to continue doing, and I can probably get 10 or 20 people to come each time. But it probably wouldn’t be easy to get 1000 people to sign up, which is what I would need for the Kickstarter project I planned. Plus as dozens of people have warned me, castles cost a lot of money to maintain, are hard to keep heated, and maybe not as comfortable as a modern building.

With that in mind, we’re starting to think smaller, and closer to home – in Oregon.

Rather than buy a house I’m very interested in buying something with land, which I can turn into a summer camp for adults / writer’s retreat / digital nomad camp. I’d put a tiny house or two on the property immediately, one for us and one for a property manager – that way I could invite people to come and live for free as a writer’s retreat, and they could help check in guests if we rent out the main house as a getaway. I’ve been looking for amazing properties with tall fir trees, with a lake and a view, preferably.

Ideally we’d build about 10 tiny homes or cabins, some large event spaces, or some tree houses and hobbit homes. The idea would be:

-To live somewhere amazing, but not have to be there all the time. We could live there about 4 months a year, but also rent out the property nearly year round so we’re not actually paying for the mortgage.

-One of the huge advantages to buying a home, even if we don’t need one, is because we can rent it out right away; so it would really be an investment property. We may buy something close to downtown Portland also, just to rent out. Done right, it wouldn’t cost us anything, and might even provide some income for roughly 30 years, after which it would be ours.

-But mainly, I want to have my own place where I can build it as I want; to make a creative center to support people; to make a camp for adults where people can come and have the time of their lives playing in the woods and recharging their creativity.

I can still be doing all the stuff I’m already working on, this would just be something else, something extra… to give us some permanence and a home-base.

I even found the perfect house…

It’s actually in Washington, about an hour North of Portland. It’s not exactly the scale want, to make a huge summer camp, but it does have four acres. I could probably run events or retreats for about 25 people if I add a few cabins. It’s not exactly a castle, but what mostly attracted me to the castle lifestyle was being surrounded by nature anyway. 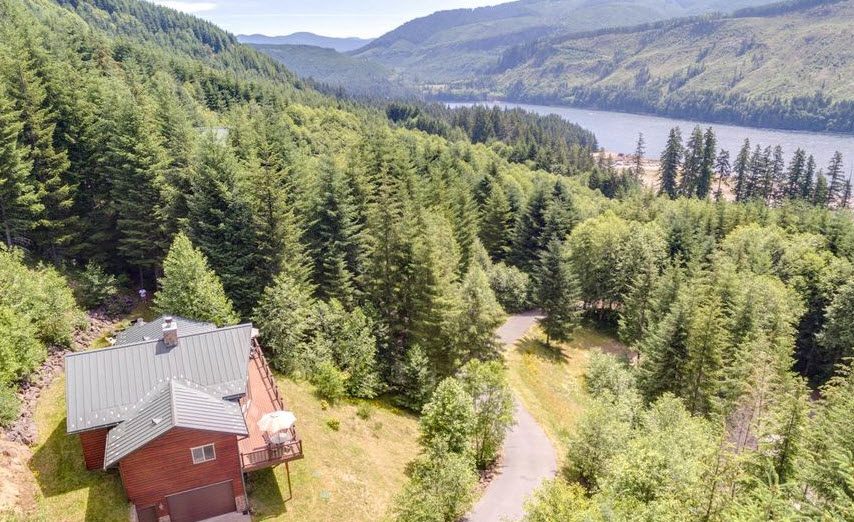 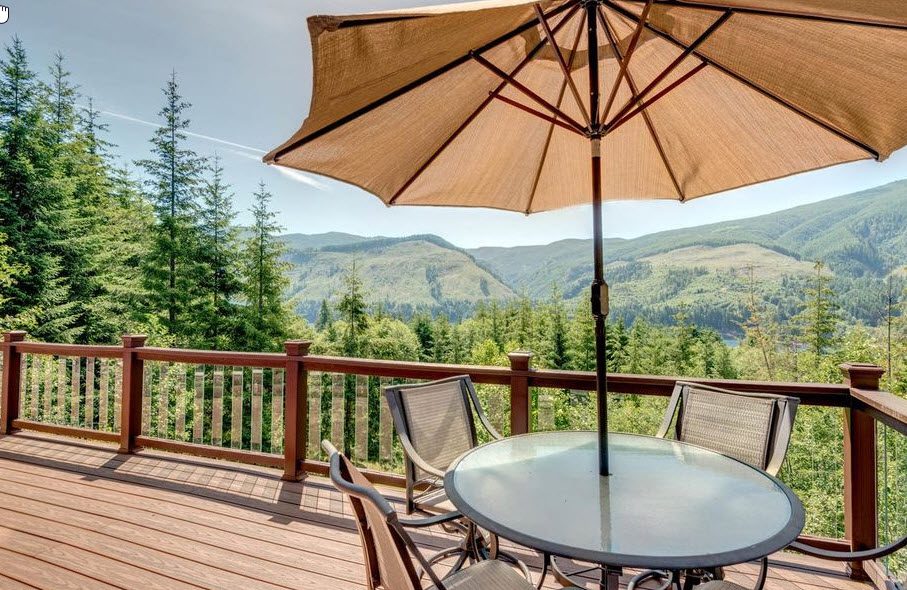 I tend to get obsessed about things that I want, and I have a hard time letting go; but I may figure out later this property isn’t for us. Right now I love it… which is good, because it forces me to think differently about what I need to achieve this year.

PS) There’s nothing I hate more than limitation. It frustrates me that I can’t have this house. It’s an affront to my ability to control my reality. I don’t like it when people think my goals are unrealistic or unattainable. It’s fine if I don’t want to buy a house, but that’s not the same as not being able to buy one. At the very least, I want to prove that I could buy this house by making it within the realm of possibility for me (I might still change my mind about this specific one, though probably not about the land+camp+writing retreat idea).

My main goals in 2017 were to publish more books and get my book-sales income up to $10K a month. That’s a big goal, but one that I think will be attainable. That will be one major arm of my future income, but will take a lot of work and effort (I need to put out about 10 books this year).

But the other main arm of my online businesses, are all of the publishing related services, templates and content I have. That side has been growing for several years, but not really earning much, because it’s not well organized and I don’t really have much to sell. That will change this year.

I plan to launch the Guerrilla Publishing course in the next month or two, and am shooting for $50K in sales (200 sales @$349 is my goal). Then I’ll launch the 21 Day Author Platform in the fall and hope to make $100K. Previously, I had those sales numbers and felt confident about them, but they also don’t mean that much to me, they’re just numbers. Now that there’s a house I want though, hitting those kinds of numbers will mean I can get all my finances organized, fix my credit score (which probably isn’t great), and getting a mortgage sorted out (practical, adult stuff I never though I would need to do…)

But that house though!

The really cool thing about online courses, is that they’re really easy to scale. So if can meet my launch goals, could spend most of the money on ads and expand my reach. The house I want is $350,000. That’s just 1000 sales of my $349 course (doesn’t that seem especially fortuitous?) It might be a stretch. It might take a lot of work. But it’s within the realm of possibility.

How do you launch courses and make that much money? Don’t worry, I’ll be transparent about my launches and how all of this stuff works. Basically, I provide a ton of value but also demonstrate there is a lot more to learn; people who need more feedback or support will pay extra to get my personal attention and help to sell more books or build their platform.

But first I need to get them to find me; sign up on one of my lists for free content; go through a challenge, video series, or webinar where I can show off how much knowledge I have and get them to take action and see measurable results; then I have to make them an offer they can’t refuse.

All of that will also be easier with better branding, so I’ve just had some new professional headshots taken… luckily I’m a designer so I can put together my own ads and promotional graphics. Then, once my new courses are done, I’ll put together very detailed autoresponder campaigns that sell my products and courses on autopilot (I get roughly 100 optins a day… If I was doing everything right, one sale a day should be pretty easy. If I was doing everything perfectly, I could get several sales a day).

What’s this mean for you?

You’ll be getting a lot of new content, and a lot of better looking content in 2017. I’ll redo a lot of the basic publishing resources I’ve made, and also start to talk more about writing and publishing fiction, as well as talking more about starting and running profitable online businesses.

I also hope to start doing huge camp-like writing retreats (for camp Nanowrimo) as well as the castle thing in November. I may also try to organize a publishing seminar in Portland sometime. My end goal is to have a beautiful, inspiring place where I can do my best work, and invite other artists or authors to come and join me there.

But that might be a year or two out.

This year, we’ll be on the road a lot again… going to the San Francisco Writer’s conference in February, and *hopefully* the Smarter Artist Summit in Austin (we need to figure out our travel plans still). Then maybe 4 months in Portland before heading to Europe again.

Those are my big goals. I’m sharing them now to keep myself motivated.

Do you have big goals and plans for 2017? Post them in the comments or in the Guerrilla Publishing Facebook group or on the Creativindie Facebook Page.