The six types of (failed) writers: which one are you?

I saw this infographic today, made by Alexi Maxim Russell, about the Six Types of Writers.

Great, I thought – I like cute and fun online Facebook tests about writers that momentarily distract me from the challenges of writing. I was asked, “Which one are you, so I searched.”

It also makes a major categorical distinction, which I reject out of hand:

The fact that “real” writers are creative and don’t think about business; and that people who think about the business can’t actually be good writers. Alexi’s website says the “Greasy Palms” are the writers most likely to be on the bestseller lists, but that

they don’t really like writing and are not really suited to anything creative.

And while that makes me furious, it’s a pretty common thinking among writers, who consider “commercial success” to be proof of artistic poverty and lack of integrity.

It means, for example, when I (after spending 20 years honing my craft and learning the business, as I have done), publish fiction that becomes a bestseller and makes lots of money, there must be something wrong with me. I must not be enjoying it, or my writing must actually suck, which includes condescension towards all the readers who think otherwise. 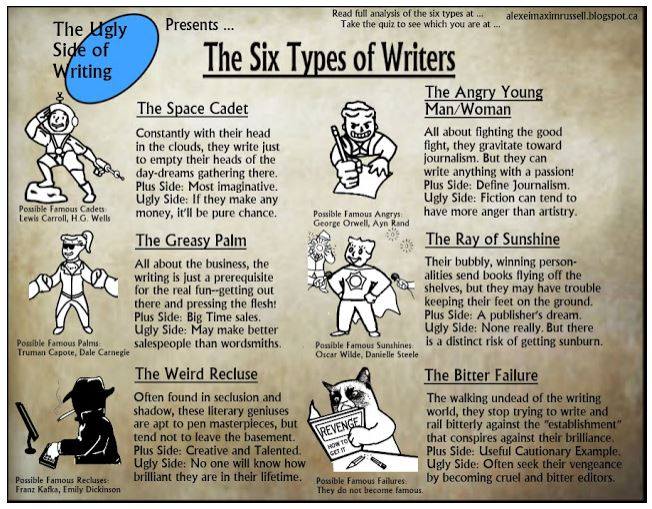 You should want to be any of these six types of writers. So I’ll create a new one:

The magician accepts total responsibility over their creative production, (by becoming a fucking literary genius and the best damn writer in the world), and also takes responsibility over their reception, (by writing books for a specific audience, cultivating that audience into rabid fans, and learning how to build an online system that does your marketing for you so you can spend more time producing bestselling books).

You don’t need to choose between success or quality, or writing for yourself and writing for the market. Those are stupid, false dichotomies failed authors use to make themselves feel better about their continued failure.

Don’t identify the source of your failure and then just give up and say “well, that’s the type of writer I am, and I’m not going to change because if the world doesn’t like my writing, they can suck it.” Nobody owes you anything. Success doesn’t mean selling out; it means being flexible and learning how to win. It doesn’t mean you’re a worse writer. Successful books are successful for a reason: people like them.

Also, while I disagree with Alexi’s infographic, I should point out that making the infographic was brilliant, and potentially more brilliant because of its flaws (which creates controversy, and gets someone like me to share and link back to his site).