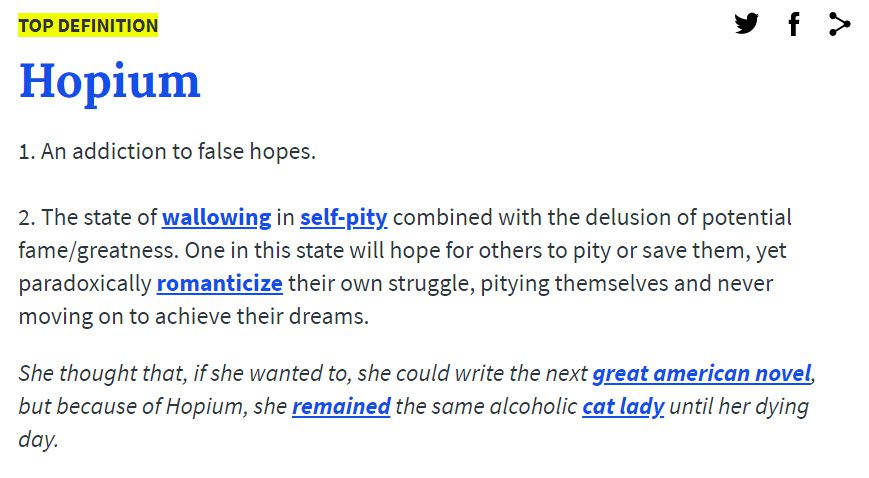 The problem with Hopium

There’s an issue I haven’t had words for, until now, and it concerns “hopium” – the rational disconnect involved when you’re forced to believe in extraordinary results, despite all evidences to the contrary.

The bigger this disconnect, the more brutal maintenance is required to keep up this level of optimism, but it’s a constant battle between motivation and belief. The truth is… your feelings or goals or expectations have very little to do with writing a good book or making it successful. It’s mostly about the craft, experience, knowledge and ability. It’s never easy, but experienced authors do not require the constant defense against the creative horrors of existential dread: will I ever be good enough, will anybody like this?

It never goes away entirely, but it is resolved with either:
1. experience and results, which acts as a constantly rising “floor” of what’s possible (it’s much easier to believe in goals that you’ve already proven are attainable).
2. letting go of all unrealistic expectations and focus on setting smaller goals.

It’s my personal opinion, that most new, inexperienced authors, should focus on #2 – just do the work. While most creativity gurus will add things like “write for yourself” or “fake it till you make it” or “believe in yourself”… in most cases, this encourages authors to keep doing things their way despite more pragmatic advice.

They are focused specifically on the most unrealistic outcomes (that my books will be successful, because I believe they will; not because readers love them or they nail all the right tropes of writing, book design or marketing). This is why, looking the definition of Hopium today, it resonated so strongly:

This is so clear, and so fitting, to the majority of authors: Hopium isn’t just the torrent of optimism and self-belief in impossible things that inexperienced authors mainline to fuel their publishing momentum… it also includes the growing negative emotions, because the abyss between The Work and The Results, between what they believe could happen and what is actually happening, is a gulf so wide, one’s belief in the possibility of every crossing gets more and more difficult to maintain over time.

They are fueling the instrument of their own destruction; pumping gas into a vehicle without wheels, that’s going nowhere. As the definition states, this leads to “poor me” posts about giving up or how hard everything is or how “this doesn’t work for me.” It can also harden their hearts against easier, more commercial opportunities, because they’ll have to convince themselves that despite results, they’ve still chosen the best, only correct path towards creative genius… and if it isn’t working, then the system is broken, not them.

And these thousands of authors, writers, creatives or even entrepreneurs then turn to the Internet for support. They’re jaded and cynical, but they hope and expect that somebody else, someone who has made it, will give up their time and support, and walk them through the entire, complex process of doing it right.

Writing and publishing is a learnable skill. Just today I read posts from authors who went from making $300/month to $35,000 a month. New covers, new blurbs, a few completed series, and Facebook ads is *generally* what it took for most authors to see this kind of shift. With the same books; the same body of work.

That’s an easy formula to remember, and it works when it works, when you can stay profitable. When it doesn’t work, you don’t have enough reviews, or your cover isn’t good enough, or your blurb isn’t specific enough (communicating the unique value or selling point of your book, without becoming vague; but also telling readers exactly what kind of book this is, with genre keywords and comp titles).

Publishing isn’t actually all that hard, and basic, successful tactics work nearly universally. The real problem for most authors, is the limited and negative mindsets they’ve been injecting themselves with, the chronic and toxic amount of hopium that is necessary to fill the void of doubt and fear most writers face, until they begin to have enough knowledge and experience to start doing things differently.

“What the hell, what a downer, Derek!”

This post, is kind of the opposite of hopium. It’s a wakeup call.

The point is, most authors need to constantly fill up the tank with new enthusiasm, without focusing on practical issues about why their books aren’t selling. This isn’t terrible; the common use of “hopium” is something like, I’m just here for my daily hopium. Knowing their beliefs are unrealistic but choosing to keep them anyway. That’s fine for a while. But… that part about romanticizing their struggle and expecting help or support, that rings true for many of the authors I encounter.

The tough negativity may be tough to hear. But I’m not even saying, don’t shoot for big goals. Personally, I think I need more unrealistic expectations, because otherwise nothing is strong enough to motivate the work. But if you know you’re doing it, it spoils the effects. And if you don’t know you’re doing it, you’ll wallow in the negative results when your vision doesn’t pan out. The trick is to be open to the manic pursuit of creative greatness, allowing yourself to sometimes fall into the illusion that you’re destined to achieve fame, wealth and fortune, especially when generating new ideas. And keep believing in them, until the work you do does not bring the results you’ve imagined.

Keep believing, but slowly raise the bar of achievable felicity, based on experience, knowledge and results so that the wild swing from full to empty isn’t as sharp as dramatic. Instead of 100% hopium, train your gas tank to accept other forms of currency; increase the size and efficiency of the tank so the motors power up and the wheels turn, without constantly drying out.

People expect influencers to share the hopium: in many cases, that’s the only thing they’re interested in hearing. That this is possible. That they can do this. Motivational posts are more shared and more valued than practical feedback or pragmatic, cautionary advice. People have specifically criticized my books because I don’t offer this kind of positive support. When authors already have so much fear, doubt and insecurity, they just want to be given solutions and shortcuts.

But I think it’s an important topic to discuss and be aware of, if not an easy issue to solve.

Fairies come save me~!

Just for fun, here’s an early example of hopium… Yeats asking Fairies to come take him away, where he doesn’t need to work for a living: baited with “light hopes and heavy dreams” until the heart is “puffed with pride” and goes half shuddering and half joyous from God’s peace.

“Faeries, come take me out of this dull world,
For I would ride with you upon the wind,
Run on the top of the dishevelled tide,
And dance upon the mountains like a flame.”

And then come the wrecked angels and set snares,
And bait them with light hopes and heavy dreams,
Until the heart is puffed with pride and goes
Half shuddering and half joyous from God’s peace;

Come, faeries, take me out of this dull house!
Let me have all the freedom I have lost;
Work when I will and idle when I will!

Faeries, come take me out of this dull world,
For I would ride with you upon the wind,
Run on the top of the dishevelled tide,
And dance upon the mountains like a flame.

I would take the world
And break it into pieces in my hands
To see you smile watching it crumble away.

And the lonely of heart is withered away;
While the faeries dance in a place apart,
Shaking their milk-white feet in a ring,
Tossing their milk-white arms in the air;
For they hear the wind laugh and murmur and sing
Of a land where even the old are fair,
And even the wise are merry of tongue;
But I heard a reed of Coolaney say–
When the wind has laughed and murmured and sung,
The lonely of heart is withered away.”
― William Butler Yeats, The Land of Heart’s Desire