A couple years ago, I told people I planned to write fiction, and give away a bunch of short, free books, to see which performed the best. Now that I’ve actually put some out, though not exactly as intended, I’m able to start seeing some interesting things happen.

Firstly, though all are pretty similar, in pretty similar categories, with similar covers, only one has really taken off. Out of four books (the last, Orpheum, isn’t pictured below) three rank around 2000 or 3000 in the free story. That still puts them in the top 20 of their categories, which is good… but not great (Shearwater below is displaying the print rank for some reason, not ebook rank). 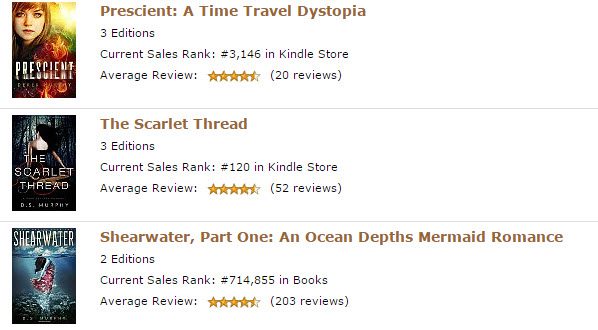 The Scarlet Thread, however, is at #120 (#101 right now…. almost but not quite in the top 100 on Kindle). That’s just shy of being in the top 10 of ALL the young adult and teen section on Amazon. That’s huge. I’m not earning money,  but I get 2000+ downloads a day. The right readers are finding me and downloading a sample, with no effort and no marketing.

Strangely (or maybe not so much) this book has less hyperbole than the others in the description. I didn’t lead with an attention grabbing title, bolded reviews, 5 stars symbols or anything, just a clean, simple first person introduction. My other books sell harder (and are less successful). That confirms the trend I’ve seen in YA books having very simple, one paragraph descriptions with no fancy stuff (though I’ve also seen hyperbolic marketing bullshit work wonders too).

It’s probably a spike, but this book has ranked better than the others for several months; I also made it free over a month ago so it’s not the first month boost. While I expect it to drop, it probably won’t drop that much.

Instead I wrote four 50K half novels, as a market test, to see which of my ideas was most marketable. Obviously, I have my answer. What I should do, immediately, is finish The Scarlet Thread and then publish a couple more in that series. That’s the only freaking thing I should do in the next few months, because I could be cashing in big on all that exposure. Later, it will be easier to sell my other books to my new fanbase.

Remember, I’m starting from scratch with zero reputation as a writer, or any actual readers, so the hard part is getting them to take a risk on a new author. But after I get their attention, by being visible, with the one book that’s performing really well, they are much more likely to buy my other fiction. (Just because you give books away does not mean they will be successful – readers have to like them enough to want more. But I still get to test what kind of stories my target audience responds to without developing a full, 3 book series.)

Next year I’ll be focusing on finishing up my series, but then I’ll publish 5 new half books and start over again; this lets me focus my time and energy on developing the books that are earning money. Less risk, less wasted time, more income gains at a faster pace. Once I have a strong income, I can finish up the other, less popular series at my leisure.

I could do that, or I could think to myself, why spend time finishing less popular series, when for the same amount of time, I could make 10X as much income writing a new series that’s very similar to my most successful series.

In other words, you experiment to find out what you can provide the market that they are willing to pay for: you found the perfect match between your skills and interests and what’s hot in the market. After that, keep doing the same thing until it’s not working any more. Then go back to experimenting. That’s business. It’s very, very rarely the way people write and publish books, but my aim of making myself a case study is to show you that this can work.

The other nice thing about free books is that you can test things out so much faster – if you’re selling for $2.99, it’s hard to have enough sales date (unless you’re selling hundreds a day) to make decisions about your sales copy. With a free book and more downloads, you can tweak and test little things in your sales copy until you get your free book to stick high in the rankings (if you can’t give away your book for free, you won’t be able to sell it either). But if you give it away, you can figure out what works, which means whenever you find the ultimate formula, you can raise the price again and it will be much more likely to succeed.

I just tweaked The Scarlet Thread’s book description, figuring, if I’m so high already, I can do a little better… however I might have also screwed up whatever magic was happening (if I see my rank drop again, I’ll set it back to what it was, even if I don’t understand it).

You don’t have to give away free books: I have friends who just put out a few books and got rich, because they hit sweet spots in the market and connected with readers. You can try to do it that way first. I think my way is faster, especially if you’re a first time author and you don’t know what you’re doing. Later, I won’t need to use free books because my paid books will stick and sell. But for now, this is easier for me.