The easy way to launch a book (with a list)

A month ago I published my first fiction. I was stressed about it. I checked my ranking every 20 minutes. And I wrote two major tutorials chronicling the experience, including all the stuff I did to make my book a bestseller.

Yesterday I published two more. And it was so .  much . easier …

Firstly, I built a huge list of YA readers with giveaways.

I put my books on preorder.

I put together a contest to encourage action (featuring a bunch of popular books in my genre and a $400 custom corset).

I emailed my list once, telling them the book was free and reminding them about the contest.

(I did that 3 days after launch, because I didn’t get the right files up in time, so I didn’t want to get a ton of downloads until it was right). 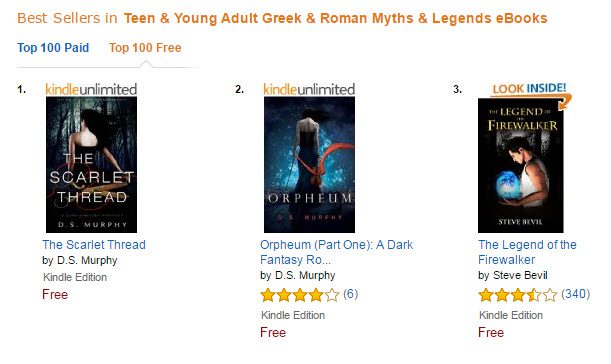 I’m also in the top 100 free in the Teen and Young Adult category. I’m at like 24 and 26… I’ll probably break the top 20 free in that category, which is a  lot of free visibility. Because I don’t have many reviews or blurbs yet, the conversion won’t be great, which is why I need to do a bigger free campaign next week once I have some reviews.

For now, I can basically chill.

This is without any big promotion, advertisement, Twitter campaign, etc. I went out to see Zoolander 2.

I’m already thinking about the next book, and other things I need to work on this month like my PhD.

After the first free day, which got 1434 download, both books were on the first page in their categories.

I’m not going to bother with trying to hit #1 right now, it’s too much work and doesn’t really matter, as long as my rankings stay high. I’ll do a push after the second free days.

I’ve been watching my books for the past week. They didn’t plummet in sales rank.

The Scarlet Thread is at around 15,000 and has been doing better (with less reviews).

I am disappointed by the number of reviews though, only 10 and 13 respectively.

On the other hand, it’s only been a week. I can’t remember how many Shearwater had – it has 129 now.

And I haven’t even done my real marketing yet.

Today I finally set up this page of best YA books based on Greek Mythology. I’m giving away popular books in my genre because:

I’ll tell the authors in it about the post and giveaway; they might share it with their readers (even if not, I can target followers of other authors or bestselling books based on interests). For example I can give away a copy of Fallen and Percy Jackson, and target readers who like each (by using Facebook’s advanced targeting to narrow the audience), then when those readers see their favorite books, they are more likely to engage.

I listed the free days on a bunch of book sites, and paid for ads on FreeBooksy and The Fussy Librarian.

I’ll also remind my list again just in case they didn’t get the books on the previous free day.

I’ll want to get most of the downloads on the first day, so it can sit high in the free lists for several days. Last time I paid a service to get 5K free downloads, that’s risky (Amazon doesn’t like it) so I may not do it again. I do want to get a few thousand downloads though and more visibility, which is where the majority of reviews will come from. Ok, I caved it and bought it. I probably won’t do it again, but it is a pretty serious marketing boost, and I want to grow my platform quickly. I bought it on one of the two books, so it will be really high when the other book is free (also it has a long excerpt of the other one in it, so if people just download one it’s fine).

Both books actually started doing better on their own (though it was probably because of the post about mythology books that I was sharing and promoting).

Scarlet Thread is ranking around 10,000, along with Shearwater. I don’t know why it’s doing so well compared to Orpheum – must be the description. It’s showing up in Hot New Releases and is #2  in paid, right under Rick Riordan’s Trials of Apollo. 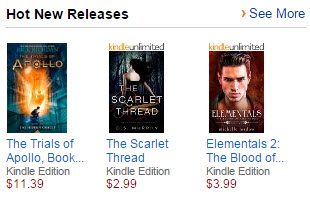 Orpheum is at #8000 or so in free, which puts it pretty high in the free category. I should be able to break in the top 100 though. Now it’s #294 in the Free section. That puts me on the first page for ALL of Young Adult>>Fantasy.

That’s with 729 downloads – and I haven’t even done any advertising, or the 5K downloads blast (which I probably didn’t need). In fact you could argue getting up even higher could be bad, because right now I have visibility in my section, but if I get up to top 10 in the free kindle store I’m going to get lots of downloads from people who aren’t normal readers of my genre, which could lead to negative reviews.

Shearwater and The Scarlet Letter, btw, are #19 and #20 in the YA Myths & Legends category. That’s awesome, for a book I published over a month ago. It doesn’t mean a ton of sales – I average about 10 sales a day – but the trick is to sell ENOUGH to stay visible. Most authors blow their wad on promotions, are “successful” because they sell a lot of copies, and then their book disappears and they can’t get it to move back up again.

With my extra boost of 5K downloads, I’m up to #13 in the whole paid store, and #2 in all of the young adult category. 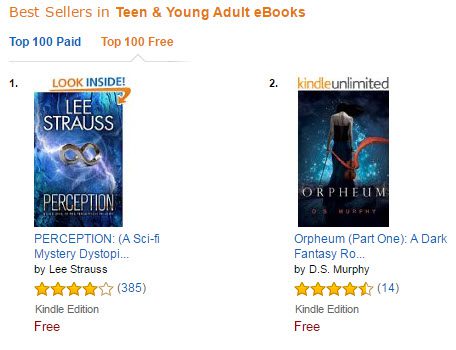 And #1 in a whole bunch of categories.

Like I said earlier, I probably could have done without, but that’s really positive extra visibility. As long as you’re giving your book away for free, do whatever you can. I’ve heard of authors saying they’d be happy getting a few hundred downloads on their free days. That isn’t nearly enough! If 1 in 100 readers reviews your books, you need 2,000 readers for 20 reviews! (Although, you should also add an incentive or something).

I was excited Shearwater was doing so well, so I changed all the description, which I didn’t think was very strong… it didn’t help. If it doesn’t keep helping I might switch back. (It’s going up and down around the 10K mark so I’ll leave it for now).

Cuz why not. I threw some in. And it’s a good chance to test regular advertisements vs. boosted posts.

I’m copying a model from another book, which is over-the-top, almost full of shit.

But since I have similar books, I can split test.

Update: It’s been a month since I published these two books, and I haven’t done any marketing for the past two weeks. Scarlet Thread is consistently sticking at around the 5K mark, while Orpheum consistently drops to about 20K.

Scarlet Thread has 28 reviews, and Orpheum only 17, but reviews don’t seem to matter, because Shearwater has 140 reviews but is usually between 10K and 15K.

Different genres, different covers, different descriptions… even though all my books are similar, it’s obvious that The Scarlet Thread has broader appeal and is converting better. I even changed Orpheum’s price 99cents, but that isn’t improving rank.

At this point, it’s all about tweaking and testing – conversion should be so good that rank constantly improves. If it sinks, it means there is room for improvement.

ALL in all, a decent launch with little effort.

Most authors I know have trouble keeping their books above the 100K rank (which means they aren’t selling at all). My books are all still in the top 20 of their categories, which means they’ll continue getting visibility. And I’m just starting. It’s possible that I’m in the honeymoon phase and my books will drop and disappear over time, except I doubt it, because these are only the sample books – the first half of full novels. By the time I finish all my halves, and start rolling out full novels, and then series, things should start getting very, very good for me; because I’m building a platform, a funnel, a system, and each new reader introduced to my system will get lots of content.

Over 700 people have signed up to my email list (not the one for contests, the one for actual fans) and that should hit 1000 by next month.

I’m very happy with where I am already.

But I can do better.

In the next launch (Prescient) I want to use Amazon giveaways and gifting to spike sales rank, by buying and giving away copies of the ebook. I believe this will be a powerful way to boost sales rank – the best way I’ve found. I want to get to #1 in Time Travel and #1 in Dystopian… and stay there.

After that one, I should know enough about marketing to stop testing and just focus on producing more content. I’ll be putting all of this together in a book and course on book marketing, so stay tuned if you want to apply these lessons to your own book launches.