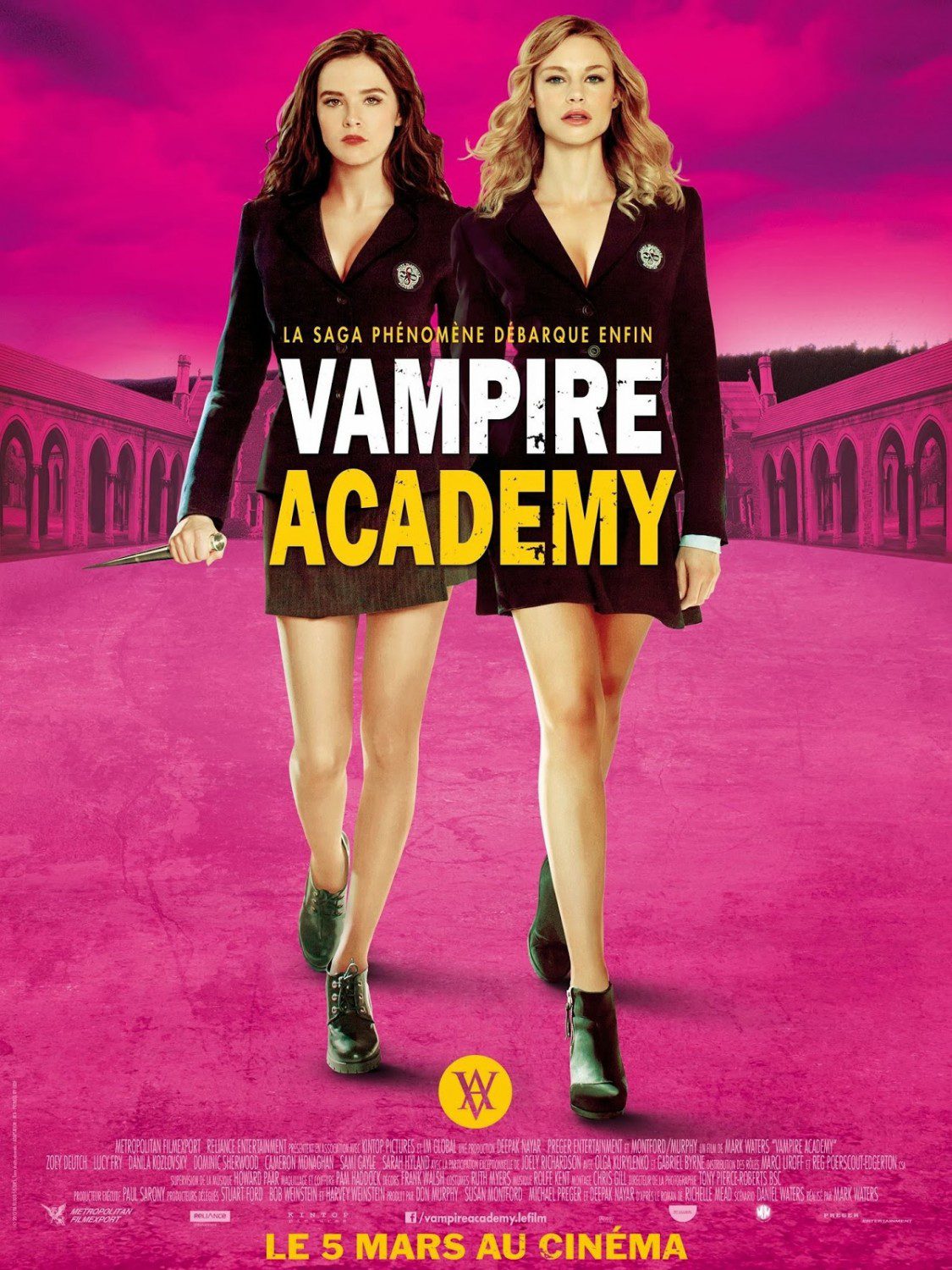 Only Lovers Left Alive vs. The Vampire Academy (Reflections on High and Low Art, Life and Death, and Creative Production)

I underestimated vampires. I thought the trend was mostly dying down.

I thought we, as an international culture, had decided to focus more on zombies, post-apocalyptic survivors, and dystopian, authoritarian governments. I thought Johnny Depp in Dark Shadows or Adam Sandler’s Animated Vampire Film Hotel Transylvania signified that the creative juices, the pathos and the emotional thrills of the vampire genre had been sucked dry.

I thought The Vampire Diaries proved the genre was only fit for high school melodrama, with steamy but untalented young actors breathing heavily and manufacturing conflict through stupidity.

Then tonight, we decided to see what was playing in the movie theater.

The only tempting options was Only Lovers Left Alive, which looked great although I didn’t know what to expect.

I was blown away. 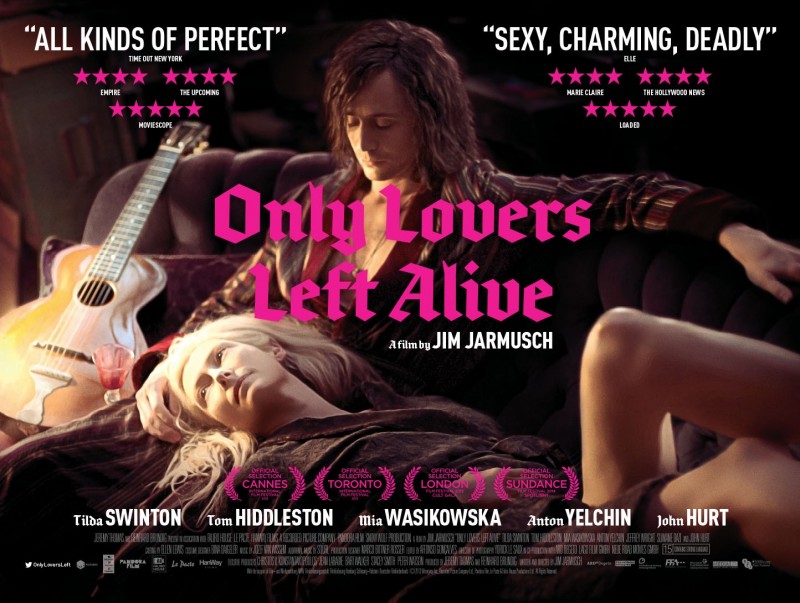 The movie is so slow, and moving, and powerful, but mixed with bizarre moments of staged humor; scenes that were self-consciously funny.

In the always dark wasteland of human civilization, fighting for oil and water, destroying the earth, a pair of vampire lovers give each other comfort.

Unlike most other vampire sagas, which revolve around interpersonal conflict, in Only Lovers Left Alive we get the much more believable aftermath of eternal life.

What are you going to do with all that time?

I suppose we are meant to believe that “Adam” and “Eve” are the original biblical pair, the first humans, although this seems unlikely.

But let’s say you’ve been alive for hundreds of years.

Once you’ve covered your basic needs (bought a house, have a steady supply of blood) and assuming you’re in a long-distance relationship and aren’t interested in sex, you’d get to explore your passions without limit.

Adam is the perfect artist according to the romantic definition – uninfluenced by external demand; producing just for himself; not trying to get famous. He just loves the instruments and creating the music.

He’s even made his own generator. He is completely and literally disconnected, off the grid.

But at the same time, the pointlessness and futility of it all renders him suicidal.

Who cares about him, and his music, when the whole planet is dying and the human race hopelessly contaminated?

He asks his one friend for a wooden bullet, trying to get up the nerve to kill himself.

Eve senses he’s in a dark place so she flies over to visit him in Detroit. Rather than a musician, Eve is a bookworm. She’s read all her books many times; she reads a bunch of languages. That’s her hobby. But she also has at least one  friend nearby.

She’s a consumer of art; an appreciator. That’s why she doesn’t get bored and suicidal.

The lesson is, the romantic view of artistic production (spontaneous overflow of powerful emotion) – “pure creation” – is entirely meaningless and selfish and trivial. Even if you’re a goddamn genius; even if you’re a virtuoso with any and every instrument. If you’re just in your own head all the time and don’t produce anything for others to enjoy, it’s all dust and wind.

By the way, though the film doesn’t say it, I’m pretty sure Adam is actually William Wordsworth. This poem for example seems to sum up the entire movie dialogue perfectly:

“Dust as we are, the immortal spirit grows
Like harmony in music; there is a dark
Inscrutable workmanship that reconciles
Discordant elements, makes them cling together
In one society.”

Adam is frustrated because the human race is so afraid of its imagination. All the creative geniuses, the new technologies, the scientists, are ruined or ignored. Maybe that’s why he doesn’t share his art. He doesn’t like to let people listen to his music. 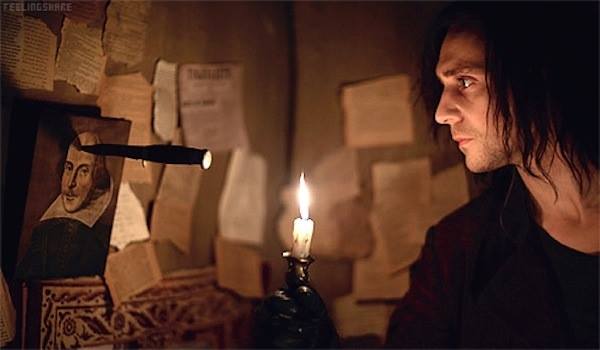 Life is about surviving things, appreciating nature, nurturing kindness and friendship, and balancing.”

Except, it totally isn’t.

The fascinating thing about the movie, is you have these two brilliant, incredibly talented and intelligent people, who have lived through history and known all the greatest creative producers ever; and also the aging Marlowe – all these incredible, eternal souls…

But they are completely dependent on their supply of fresh blood.

Fresh blood is scarce and rare. Being a vampire is a hard secret to keep. You can’t live somewhere and just go around killing people. Too much trouble. Eve’s little sister shows up; she’s immature and selfish, drinks as much blood as she can get; even kills Adam’s human/”zombie” pal just because she’s lazy and doesn’t give a shit. (She also breaks all his guitars and records… why? Because she’s psycho?)

The dead body in the house ruins Adam’s carefully protected shell of creative isolation, and could also get him in trouble with the police, so they dissolve the body in acid and flee the country.

But back in Tangier, Marlowe has run out of good blood and has to drink from an untested blood source which turns out to be contaminated.

He dies. One of the greatest creative minds in history, who lasted untold centuries, and his life ends because he can’t get fresh blood.

Adam and Eve are suddenly at the end of their rope. Tired and hungry. Genius, perfect, intelligent, but they have to eat or they’re going to die.

They stall for awhile; Eve buys Adam the beautiful instrument she’s promised him.

They pause to listen to enchanting local music.

They sit and strum and talk about Einstein’s theories of physics. But then a pair of young lovers comes into view, and ultimately they decide to act.

As refined and smart and talented as they are, they attack a pair of strangers and drink their blood.

Ultimately, nothing matters except biological function and whether we do what it takes to survive, or let our lights wink out.

If Only Lovers Left Alive was unexpectedly good, The Vampire Academy was worse than predicted. 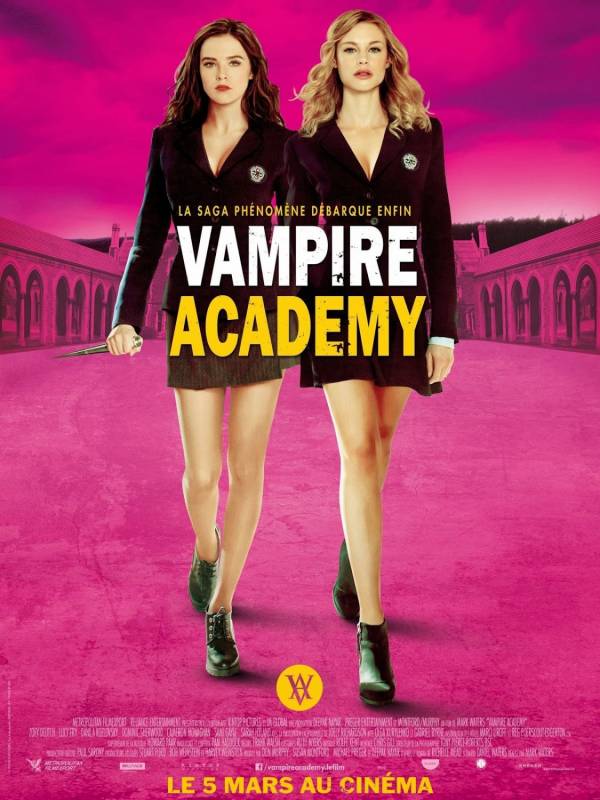 Having read the books, I won’t simply dismiss them as teenage junk; they are well enough written, and certainly on the same level as Twilight as far as fiction goes. As a guy reader, the emotional core of the novel (Does this guy like me? Is he seeing me wear my pretty dress?) doesn’t hit the same buttons, but its success proves it connected well with its target readers.

The movie, however, was laughably bad. Far too much talking, and fast-paced, rapid storyline that was hard to follow. Cheesy music at all the right times. Unforgivably awful motivational speeches.

It was a “girl-power, teenagers rule, bullies suck and friends are awesome!” kind of movie. Even the dramatic sense of emotional relationships were empty and superficial.

But so what? It’s a book that got made into a movie with famous actors. You should dream for that kind of success.

Richelle Mead took something popular (vampire romances) and reworked the material into six novels about teenage high school angst,  parental disapproval, loyalty to friends, skeezy guys, that guy who likes you but you don’t like him back in the same way, getting all dressed up for a formal dance… It’s basically Harry Potter for girls who like vampires.

There is no “selling out.” There’s only success or anonymity

It’s a myth perpetuated even inside Only Lovers Left Alive, when Adam hears that great singer in Tangier. Eve says “she’s going to be famous” and he responds,

God I hope not. She’s way to good for that.

But success isn’t failure. Art doesn’t come out of a vacuum, it isn’t pure and lofty and removed. It might be pretentious enough to act like it doesn’t give a shit about the consumers, but successful art always takes a theme that’s already trending, that’s already popular, it takes that vehicle and fills it with its own unique message and worldview.

If Nothing Left Alive was just a movie about some junkies getting their fix on and producing art, it wouldn’t be half as cool. They didn’t take on the vampire fad when it was just arriving… they waited until it was on its last leg, after Twilight and all the other vampire TV shows and movies of the last decade (although – I think they’ve been working on the movie for 7 years, so I guess they did hop on pretty early).

The point is, both “high art” and “low art” attract attention and visibility by acknowledging the ruling passions of the majority. They accept the mantle and they use it to tell a story. “High art” like Only Lovers Left Alive may be beautiful, and perfect, and sophisticated, and tickle your brain in all the right places, while “Low art” like Vampire Academy is mostly cheese, boobs, pretty boys, witty banter, ass-kicking and flirting, and mediocre artistic production.

But in that they’re both just movies about vampires, they’re both “sell-outs.” And that’s awesome. If they were obscure, they never would have made it around the world to me so I could go watch them in a movie theater (I’m in Taiwan).

“Write what you know” doesn’t mean you should shy away from popular genres.

I have a friend who’s finishing his PhD thesis and then plans to focus on the fantasy series he wants to write.

And that’s great, but he’s mapped it all out without considering the genre pool (how many readers read a particular genre). The chances of becoming hugely successful are drastically improved when you write in a very popular genre. Off the top of my head, I’d guess there might be 10 readers of dystopian or paranormal romance books for every 1 reader who enjoys really long fantasy sagas.

When I encouraged him to put out some more trivial books first – because writing “the one book” you’ve always wanted to write can be paralyzing and make the process much harder – he shook his head. “I just don’t think I could do that.”

For him, writing something he doesn’t care about instead of his passion is selling out.

For me, it’s a challenge and a game. I can still “write what I know.” I just take the basic rules of the world, the key factors that make bestselling books tick, and put it all into a setting I’m familiar with. And because it’s not my “one main book”, I can crank them out and have fun without worrying about how good they are (which really, really improves the writing!)

Did you watch both movies? What did you think?