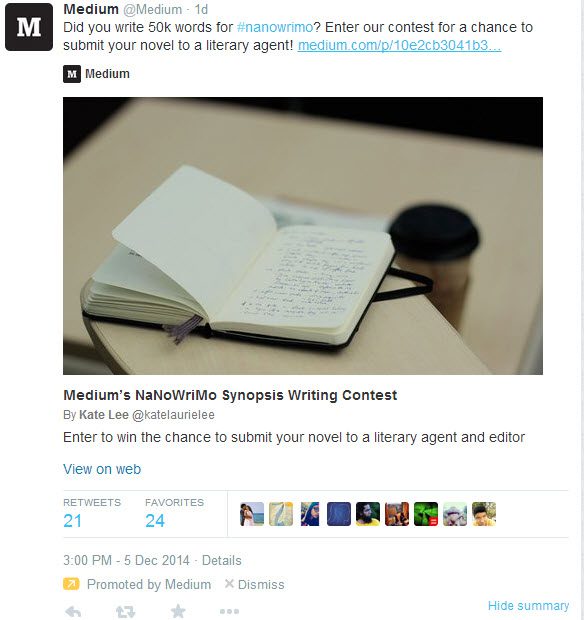 Medium is appealing to Nanowrimo authors to boost traffic.

That in itself isn’t a big deal.

Around 400,000 writers participated in Nanowrimo this year.

I appealed to some of the same target with my 30 covers in one day stunt.

And we put out a free book on self-editing over on Book Butchers to help Nanowrimo authors.

So how is this any different?

The winners will not be chosen on merit (not even just a little bit).

The winners will be the three writers who post a 500 word synopsis of their book and get that synopsis “recommended” (Medium’s version of a “like” button) the most number of times.

Which, for Medium, is the right way to do it. They get a bunch of new content and a small army of writers desperately driving new traffic to that content. And they don’t have to do anything. They don’t have to read all the submissions or sort through them; they don’t have to make any tough choices. They just pick the three with the most shares (and then pick just ONE of them as the “winner”).

Even if they’re terrible and don’t have a chance in hell at impressing anybody.

Honestly if you’re capable of driving such a huge number of people to recommend your book synopsis on Medium, you don’t need an agent or publisher. You’ve already got an audience. Self-publish and ask those same people to buy, share or review your book instead.

The problem with Nanowrimo

I love Nanowrimo, but here’s the problem I’ve noticed:

They’ve built a huge, non-profit community of people writing books, but they’ve kept their extreme distance from anybody selling services, or publishers/agents… anybody with a commercial interest.

But if you want to publish a book and have it be successful, then it’s got to sell a lot of copies and make a lot of money.

So at some point, the goodwill of the exchange community isn’t going to be enough anymore. All that free advice or those free covers you got just aren’t going to cut it (incidentally, I wanted to work with Nanowrimo authors by offering 30 free book cover designs and they removed my post. Apparently because I’m a successful book cover designer with a professional interest, I was suspect, and only amateurs were allowed to offer free covers).

What you get is half a million writers trying to publish while refusing to think about business considerations, like product design, sales pages, growing a platform and a mailing list, social media marketing, etc.

The “Business People” (like Medium, who are ready to appeal to Nanowrimo’s popularity for a quick boost in traffic) are standing on the other side of the river from the “Creative People” – the authors writing books but having no hope of getting them edited, designed and published without spending several thousand dollars.

I’m one of the lucky few to be in the middle, as a book designer and writer, so I can write and publish books with no expenses, and I’m trying to offer as much value as I can with free guides, resources, books, templates and tutorials.

But it is a jungle out there.

Sometimes it’s worth hiring a guide.

Sometimes you just want to have a dangerous adventure.

Sometimes the natives will string you up for dinner.

It’s worth the risk, but be smart and stay safe.

Here’s a link to the contest so you can check it out; I’m not saying don’t do it. Why not participate? You may find some new readers. It’s always good to put your work wherever you can, as long as it’s free and easy (or if it’s worth paying for – as in it directly relates to increased book sales).

Just keep in mind that popularity contests are antithesis to finding quality writing in a sea of crap.

There are too many books for anybody to actually go through and read them all to find the good ones, which is why many publishers have stopped trying.