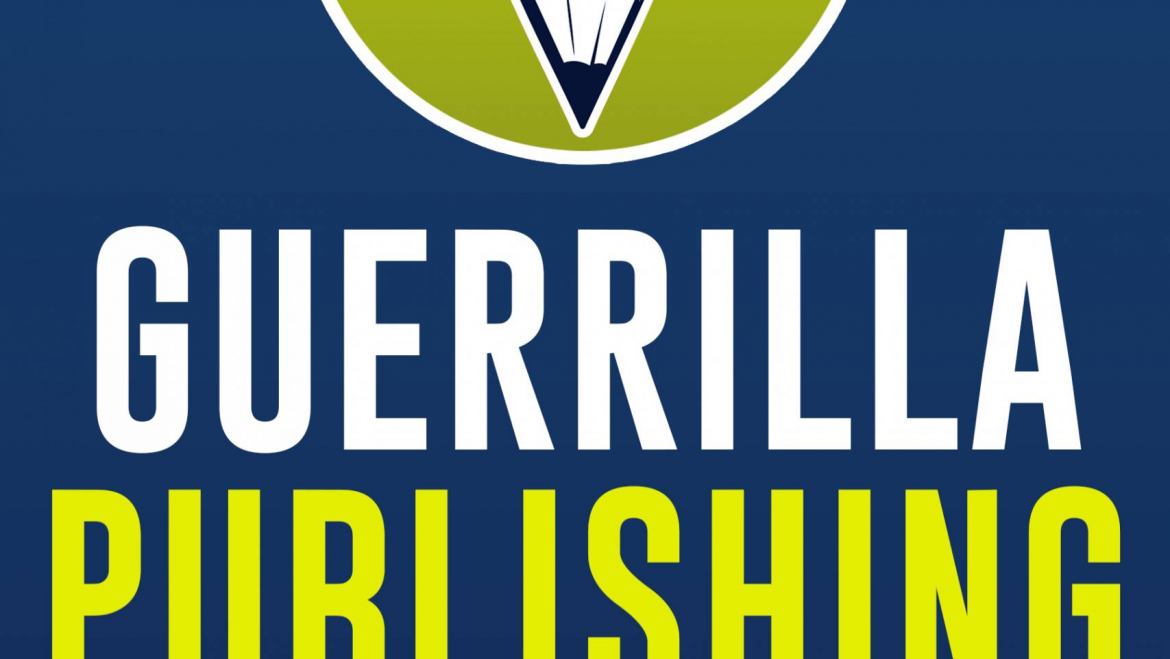 I missed my Kindle preorder window… so Guerrilla Publishing is free!

I really thought I was going to make it this time.

I put my book Guerrilla Publishing up for preorder a few months ago but haven’t had time to work on it. But I pulled things together in the last few days, was *mostly* finished editing it, and tried to upload it with 4 minutes left to go.

Unfortunately, it didn’t upload in time.

You used to have to upload a final file 10 days before the launch date for your preorder books, now it’s only 3 days. But I still didn’t make it. Before it launched, I redesigned the cover, played with new subtitles, and then had to build my optin-offer graphics and email list signup. I got that stuff done and it looks great. 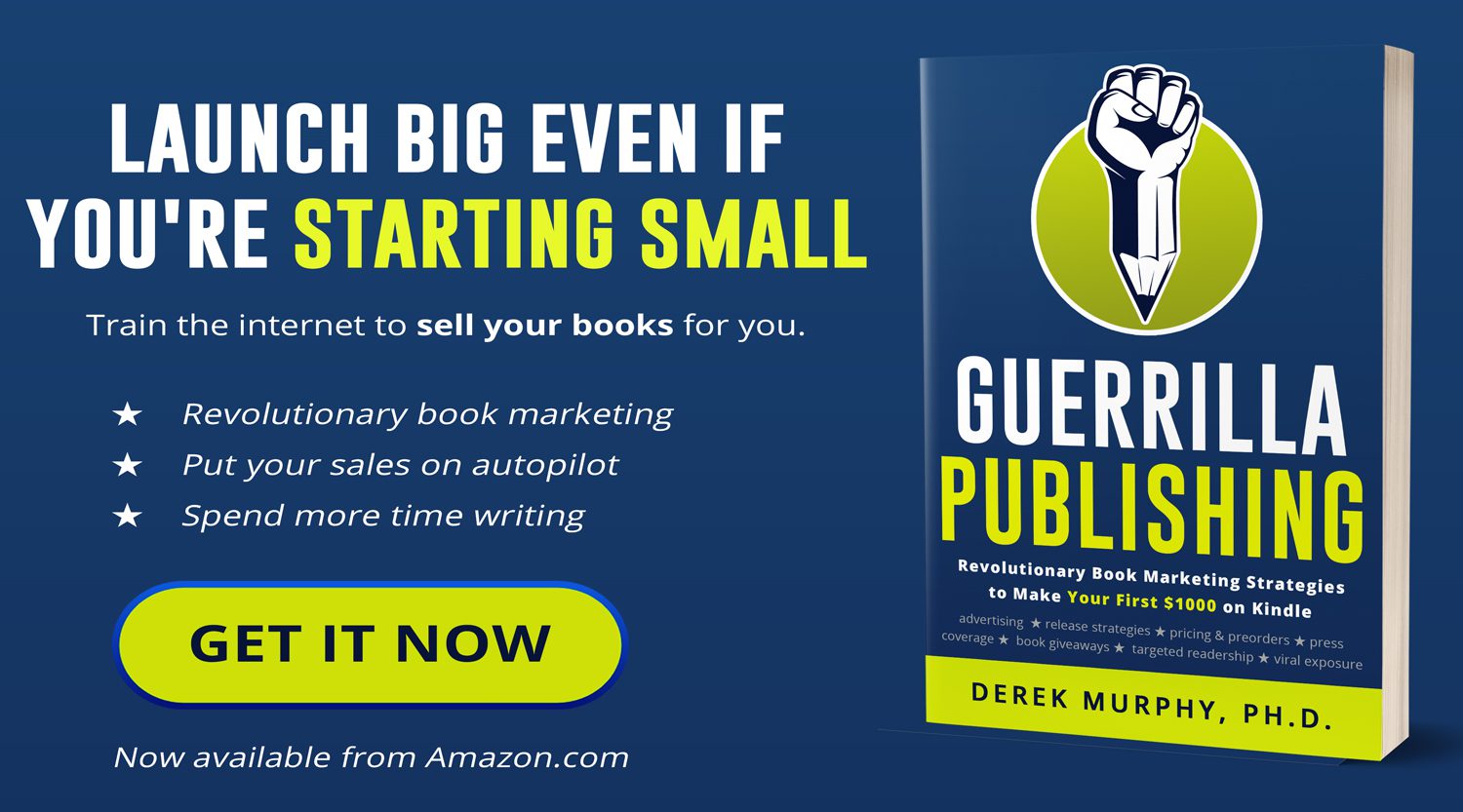 What happens if you miss your preorder window?

Unfortunately, since I didn’t get the real file uploaded in time, it means all the people that preordered this book are going to get my shitty rough draft, full of random notes to self and garbage.

That’s embarrassing, but it’s not the first time this has happened. It’s a little like missing a flight; you really don’t want to, but after you’ve done it a few times, you also know it’s not the end of the world.

Sure it’s unprofessional. Anybody who preordered the book is going to get an unfinished rough draft rather than the actual manuscript. Hopefully, since I haven’t really been promoting it yet, almost everybody who preordered the book already knows me or is on one of my email lists, so I can apologize the day before it goes live, explain what happened, and offer them the right version. But there could be people who don’t know me. They might leave negative reviews that will impact sales later.

I’m not too worried about it right now, because one of the major things I stress in the book is that it’s better to launch quickly and make mistakes, rather than try and get everything right the first time. I set up books on preorder because I know I’ll put it off to the last minute, and the deadline pressure makes me more productive. I might be late, but I also got the book done in the first week of January, and now I have two more weeks to focus on finishing Shearwater, which is also out on preorder. (Then I need to write a whole new book in February, Scarlet Thread book 2).

Stressful, yes. Absolutely. But I don’t really start promoting books until after they’re live anyway (I’ll do a soft a launch to my audience, and maybe some targeted ads, but mostly I’m building email lists or platforms so that when the right version of the book is online, then I can try to spike the rank with promotions). I’m already seeing success with my fiction, but in 2017 I’m doubling down and have a goal to reach 10K a month in book sales.

I can’t do that by managing everything in my life at the same time. Instead I have to significantly cut down on everything else, and spend almost all of my time writing (I don’t have a day job, so I usually work around 12 hours a day… even if “work” means procrastinating for 11 hours and then cramming in a few thousand words before I go to sleep).

Anyway, because I’m worried about people who preordered getting the wrong file, I’m going to upload the right file inside my Guerrilla Publishing Facebook group for free. Just join the group and you’ll see it. The book will also be free on Amazon in a few weeks, but I’ll announce that when it’s ready. If you did preorder Guerrilla Publishing, THANKS! I haven’t forgotten about the bonuses I promised. Even though I rushed this one, there are still some genius marketing hacks in there.

what paid ads work, release strategies, pricing and preorders, givaways, how to target your audience, marketing and exposure, book giveaways to reach your first $1000 on Kindle.

So many books are being published each year, it’s hard to stand out and get your book noticed. And it may seem like you’re up against impossible odds. After all, traditional publishers spend hundreds of thousands of dollars on a book launch and get blurbs by famous authors. They have websites that get a ton of traffic and huge email lists. Even worse, you’ve heard of other “authors” completely gaming the system, making tens of thousands of dollars by tricking readers into buying crappy books stuffed with free content or translated garbage.

How can you possibly compete?

Guerrilla Publishing is a crash course on some of the more creative book marketing strategies I’ve discovered in my first year of publishing fiction. It builds on the content marketing and platform building tactics I’ve used to build two six-figure businesses around my non-fiction books. People often say it’s harder to market fiction… I’ve found it to be easier, because there is so much less competition (there are tons of books, but very few authors are using the strategies I use to get visibility and reach new readers).

Train the internet to sell your books

The purpose of this book is to provide simple, actionable, measurable steps to publishing a high quality book quickly, doing only as much marketing as is necessary to launch your book professionally, and keep it selling enough to support you while you write another. We’ll discuss paid advertising, release strategies, pricing and preorders, book giveaways, how to target your audience, viral exposure and press coverage, marketing hacks, and how to reach your first $1000 on Kindle.

Stop playing by the rules
My goal is to find readers of my genre and turn them into raving fans by over-delivering on their expectations and giving them a satisfying reading experience. But you can’t compete with the big publishers by trying to do things the way they do. Instead you need to find new ways to reach more readers on a smaller budget.

Quit marketing and focus on writing

Although I have tutorials and resources that have helped over 50,000 authors, I wanted a simple, practical, in-depth guide to publishing, book design, and launching a book as quickly and easily as possible (and doing it better than the 95% of the self-published authors who never make a profit from their books).

Because contrary to popular belief, book marketing isn’t something you need to be doing all the time. If you set your book up right and launch it well, it will keep selling without any promotion.

Grab your copy today and discover what you’ve been doing wrong! 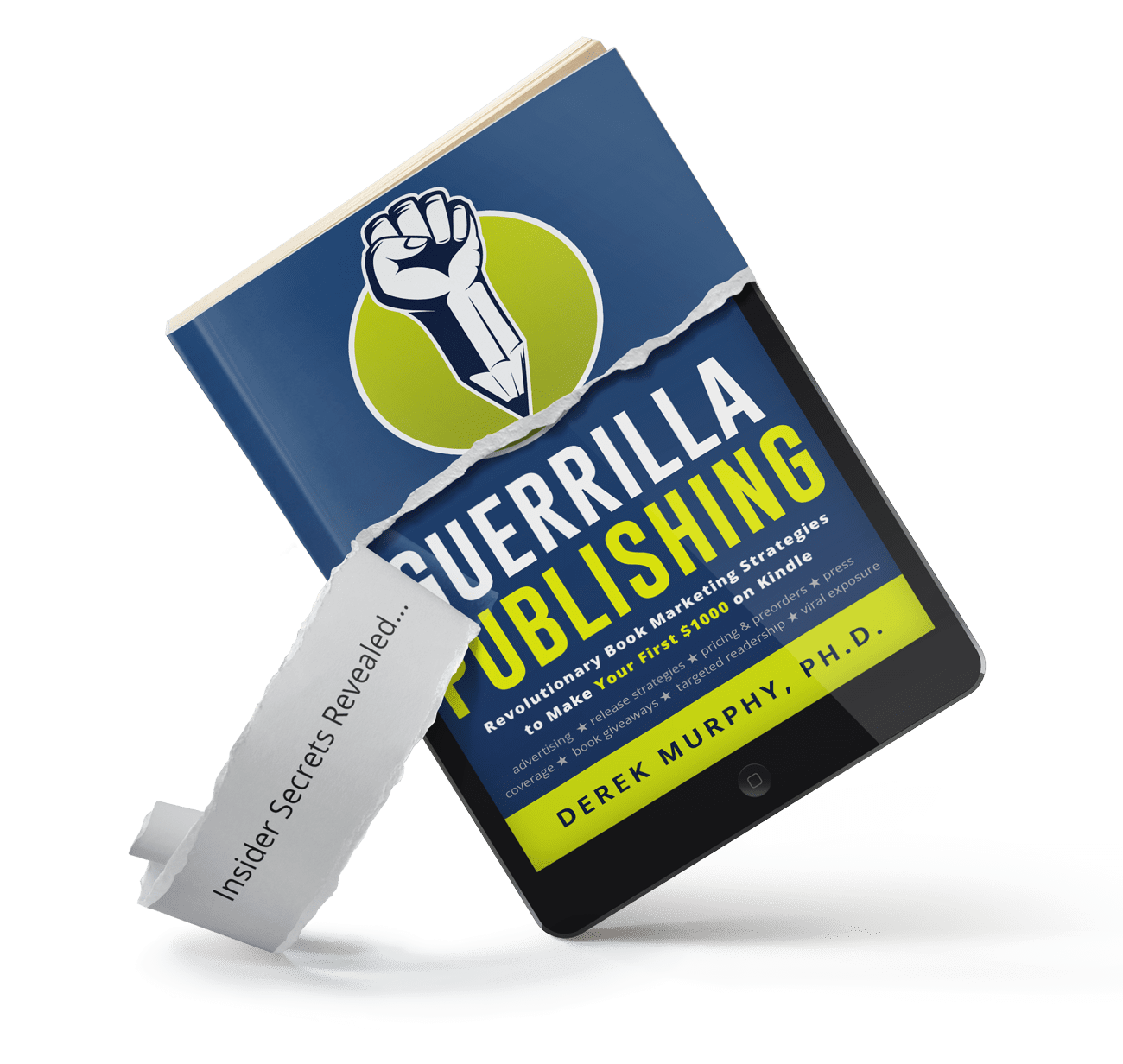