Preparing for Nanowrimo 2011, I’ve been reading Alan Watt’s The 90 Day Novel: Unlock the Story Within. I love it. Alan coaches you on how to relax and get the work done. Here are a few of the most important tips if you’ve been wanting to write a novel but can’t seem to find time.

Writing a novel is not about filling up a 100,000 word manuscript of characters and dialogue. Something has to happen. It’s called a plot. Plots have certain features. If you ignore all basic literary custom and go off and write something directionless, don’t be surprised if nobody wants to read it. It doesn’t have to be complex, but a story should have

1) an inciting incident, that starts the action. This is also called a “call to adventure”. The protagonist may not want to do anything at first, but finally he makes the decision to answer the call or do something about it (he develops the “story goal” which he will try to resolve.

2) The protagonist faces lots of challenges. He FAILS. No matter what he does in response, his actions always lead to failure (even if he succeeds, it ultimately means a bigger failure.) Show the worst that can happen from the outset. Show what’s at stake. Let the characters worry and try to avoid it. Then let it happen anyway.

3) After lots of failing, the hero has a final moment of super-failure. After that, he reflects and something about them changes. They recognize something knew. They change internally. They see things in a new light. After this personal growth, they come back to their problems and triumph.

This is the basic formula for a good story – or ANY story. If your plot doesn’t look at least a little like that, you’re probably in trouble. The nice thing is that this formula applies to almost any story in any genre.

So before starting your novel, have at least an idea of where to start, and where to stop, and what happens in between.

Stories have some basic characters. First you need a protagonist, and an antagonist. The protagonist, or hero, is the good guy. Readers HAVE TO like him. He should have some bad qualities, but mostly he or she has to be brave, good, kind and honest. They can’t be totally weak, they can’t sit back and let things happen to them (Harry Potter does this, and it’s annoying!). They have to be competent, take control and try to do something.

Your antagonist, the bad guy or villain, wants to stop the hero. He needs motivations. He needs a reason. If you’re writing a romance, or even if you aren’t, you will need a romantic involvement. Having characters of the opposite sex getting to know each other leads to sexual tension. It doesn’t have to be the focus of the story, but it’s nice to have some. A romantic involvement is another lead character who likes and wants to get closer to the protagonist.

Now you need some more characters. You need someone your protagonist talks to, so that he or she can hash things out without doing it all in their head. This is a best friend, advisor, shrink, dog, whatever. Somebody close by so that you can put in a lot of dialogue, so that the antagonist can speak his mind out loud. Many novels also have the “meeting with the wise teacher” – somebody introduces the hero into the magical world of the occult, or just somebody who knows more about what’s going on and “initiates” the hero into new knowledge.

The antagonist should also have some people around so that the bad guys can talk about what they’re going to do to the hero (building tension). To create more conflict, through in some more stuff. A dying parent, a police officer who thinks the protagonist is guilty, a jealous ex who keeps trying to get somebody to love them, a neighbor who’s angry about all the noise – more characters = more conflict!

After you’ve developed your characters, you can probably make a pretty detailed plot-map of what’s going to happen. Don’t try to hide or surprise readers – this rarely works well (most beginners actually fail in this, and leave everything to the end, so that readers don’t find out what’s happening or why it matters until the end of the story!) Instead, put everything in – in the beginning if you can. Don’t think in terms of the whole book. Think scenes. Just write one, really good scene. Each day if you can. Each scene should have action, conflict, characters doing or deciding to do something, and it should be related/necessary to the plot. Don’t edit, don’t write perfectly. Focus on getting the story down, not how good the writing is. Just keep doing it. Scene, scene, scene. You may have too many. You may cut some out later – but you don’t know what needs to go in until you’ve finished! If you get stuck, skip to another scene. Write the scenes you’re excited about first if you want. Write the last scene first if it helps (it does.)

If you’ve done this for a month or two, you’ll quickly have 100,000 words or so. Most of it may be garbage. Some of it will probably be pretty good. The biggest problem, before anything else, will be plot and character motivation. Why did the characters DO that? This is the core problem with every indie novel I’ve edited in the past few years. It doesn’t matter if your writing, characters and story are good. If you can’t explain big things that don’t make any sense, that don’t have any reason, you will fail. This doesn’t mean that the story is no good, it means you have failed to show the readers why things are happening, or why it matters. You will probably need to add a few scenes, maybe flesh out the back story of some of the characters, to give them the motivation they need to actually do the things you want them to do. You can’t just throw in bad guys trying to do something evil in the end to explain everything that happened. How was what they did necessary to get what they want? (Most writers skip this step and move to editing, and then publishing and book promotion. Huge mistake – this is the most critical step!)

Once you have a strong story, with things that make sense and background motivation, get some reviews. Don’t get friends or family. Join some writing workshops, online communities, facebook pages, Craiglist, whatever. Find writers in your area or genre and see if you can trade feedback. Listen to their feedback. Don’t argue or explain – if you need to explain, do it in the book, not outside of it! Get a lot of feedback, keep revising your novel.

Now you’ve got a pretty strong story. The story is MORE IMPORTANT than the writing. But you aren’t ready to publish until it’s been edited. Even a few typos will hurt your reputation as a writer, but more than a handful will kill it. One bad review to the effect of “too many typos” will ruin your sales. So get it edited. You can probably find somebody smart with good English who can do a good job for cheap. But paying for a professional can pay off, too. (When I edit a novel, I fix and rewrite bad writing, fix punctuation and spelling, comment on character motivation and plot problems, etc.) 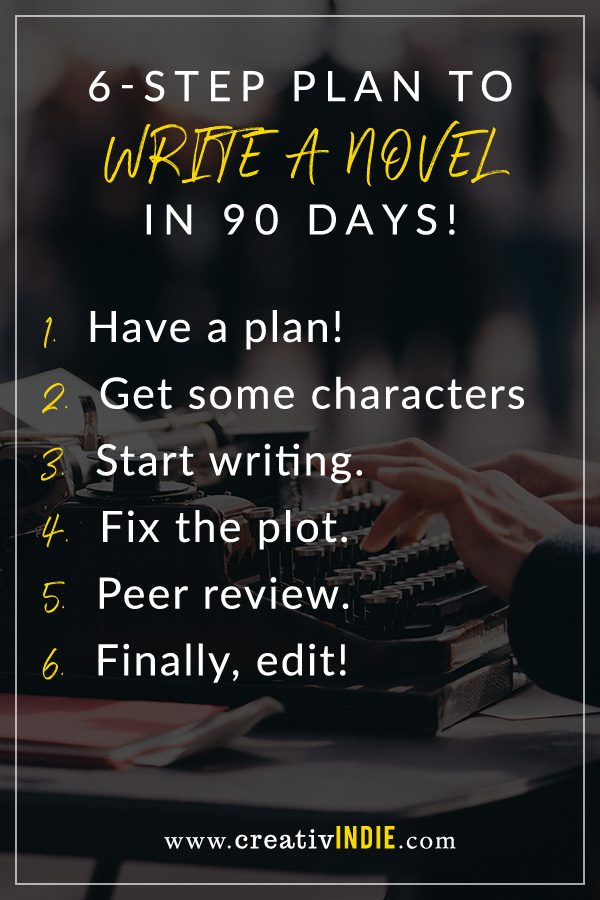 While technically you can write a novel in 30 days, it’s doubtful it will be any good. Taking a month to plan it and think about the characters, the motivation, and the plot is really necessary to write a good novel; and taking 30 days after to rewrite and edit is also crucial. All in all, 90 days is still cutting it – but possible!

UPDATE: since writing this post, I have actually finished some novels in 30 days or less. It’s possible, and the more you write, the faster you’ll get. Writing faster does not mean inferior quality. A master can produce higher quality fiction in less time.

EXCLUSIVE BONUS:  Download my FREE book launch checklist and discover the step-by-step publishing roadmap I use to launch bestsellers.