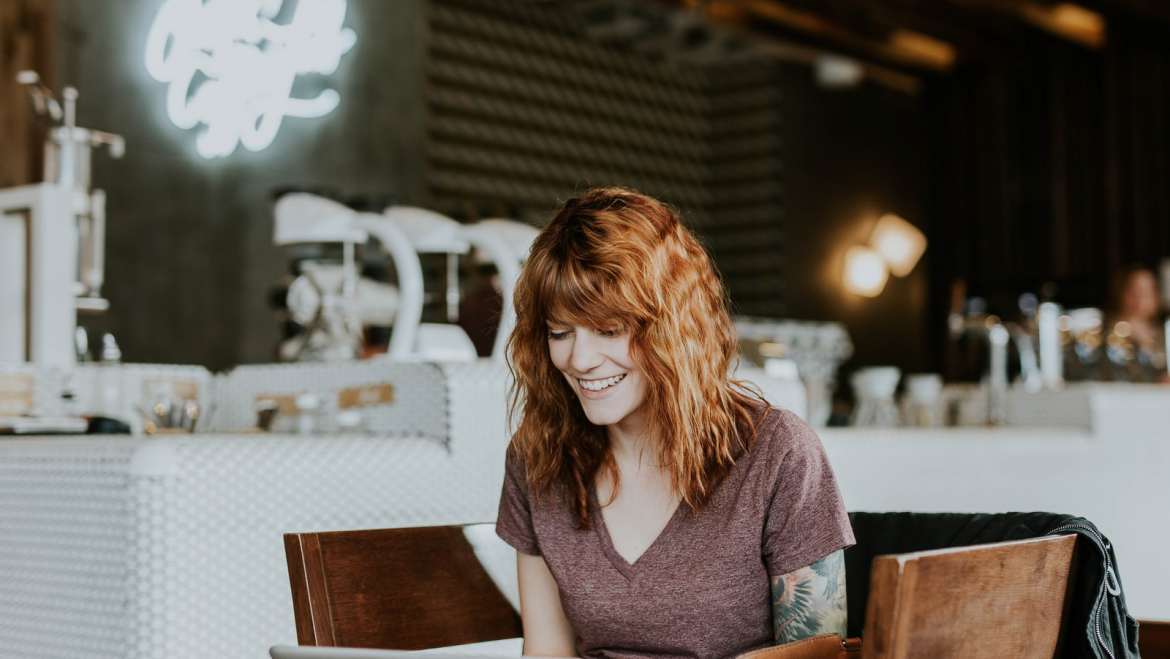 How to write a blurb, pitch or synopsis for your novel or book

A few years ago I wrote about how to craft a blurb that converts… but today I need to make a confession: I still suck at blurbs. Sometimes I think I get them right. Sometimes other people think my blurbs are awesome (and I’ve seen authors copy what I’m doing). But other times, competitors destroy me with something really different.

Keep in mind the blurb is one piece of the puzzle; there are lots of different ways to do it. In general, you want the blurb to immediately communicate enough about the story to get readers invested. Also, these words are sometimes mixed up. A “blurb” is probably the book description or sales copy, so you’d want to leave some things out while hooking interest. A “pitch” is the one or two sentence hook that tells readers or agents everything they need to know to be interested and ask for more.

After the pitch you’d have the full synopsis or book summary. You may not actually want to use you pitch or synopsis in your book description; but it’s a good place to start any way. Since I’m trying to organize all my ideas into really strong pitches, I’ve gathered some resources and examples to help.

The basics of story

Libbie Hawker has a great video on writing blurbs, product descriptions or query letters (but I can’t find it: here’s the book, 5 simple steps to a fiction pitch that sells.)

Here’s a brief summary, but obviously you should buy the book.

Don’t include everything in your book. Its job is to attract the reader and draw them in.

What sets your story apart + the SAMENESS of your story that makes your book compelling (the industry is looking for “similar, but different” – they want to make sure it already has an established market, as well as provide them with something fresh).

The 5 things: character wants something, something else stops them, they struggle against that force, they either succeed or fail – but don’t tell whether they succeed or fail.

Hint about what’s at stake, don’t give away the conclusion.

Sharon Crosby, a blurb coach, wrote an interesting post about the author’s struggle with blurbs.

She says, “I was inspired to write the little blurb when reading about how Story is important for communicating in a book written by Alan Alda. How story evokes emotion and thus helps us engage with and remember what we were told better, to become connected with it. (That’s what you want both your blurb and your novel to do for the reader.)”

“So I started wondering how I could utilize story in teaching about how to write blurbs in order to connect better. Then I thought it might be fun to take the basic story structure questions and/or “blurb formula” and make a story about an author trying to write a blurb. So I did. Only, I gave it a cliffhanger ending, like a blurb does.”

Below is what I had originally had:

1. Who is your main character? Joe Author
2. What does he/she want? To write a blurb
3. What stands in his/her way? Confusion about how to write an effective blurb. How does one condense a 100k story into a mere 100 to 200 words? What should be included and what should be left out?
4. What will he/she or must she do to achieve his/her goal? Learn to communicate with the reader in what seems like a different way, but essentially is actually understanding a lot of the heart or key structures of storytelling that humans are wired for. To understand the power of sharing the key conflict made up of want and desire that the main character has and the harrowing obstacle that stands in his or her way. Showing what the character must do to obtain the desire. And putting the readers on the edge of their seats by revealing what’s at stake if the main character fails.
5. What is at stake if he/she fails? Blurbs will remain the bane of his existence as an author, and he will not be able to reach the hearts of the readers who might otherwise have loved his books.

I then tried plugging that info into a blurb formula. Like the one below.

When [identity][protagonist name][does something or something happens], [something results]. Now, with [obstacle], [protagonist] must [do something] to [accomplish] or [sacrifice high stakes].

Who is your main character? What do they want? What stands in their way? What must they do to overcome it? And what’s at stake?

My approach, after that is to usually show an action that the character could take to help them achieve their goal. And then what’s at stake if they fail to create a cliffhanger.

And after that it’s mostly about providing some clues to the genre, setting, mood of the story. And anything that feels like it needs to be in there to make it all connect together and make sense.

“When struggling writer Joe Author tries to write a blurb for the first time for his first novel, he’s terrified to discover that a blurb is not the innocent thing he first thought it was. It’s actually a monster like no other he has encountered before. Now, with questions swirling through his head like, “How does one condense a 100k story into a mere 100 to 200 words? And what should be included and what should be left out?”, Joe Author must learn to understand and befriend the beast. If he doesn’t blurbs will remain the bane of his existence as an author, he will not be able to reach the hearts of the readers who might otherwise have loved his books—and his bank account will be doomed.”

They meet at Z and all L breaks loose.

If they don’t resolve Q, then R starts and if they do it’s L squared.

This is a cool tool to get your started, though you’ll need to fine tune after to make it awesome. 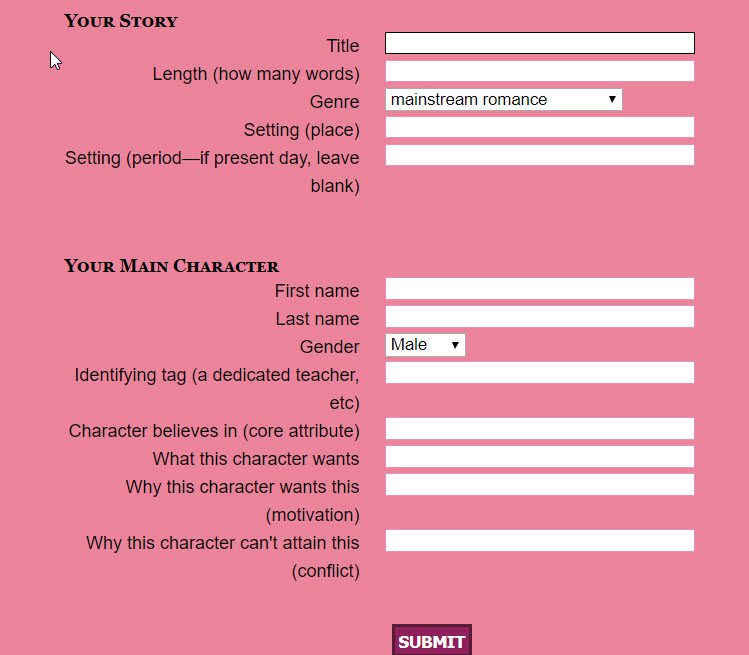 Extending the pitch into a synopsis

According to Anne R. Allen, “Now you’re ready to expand that pitch into a synopsis.  So you get to add stuff. But not too much.

Here’s what you want to get in there:

What a Novel Synopsis Doesn’t Need

I thought these Twitter threads were interesting, as agents pointed out WHY they don’t choose pitches. They’ll give you a sense of how to screen your own pitches to avoid weak writing. 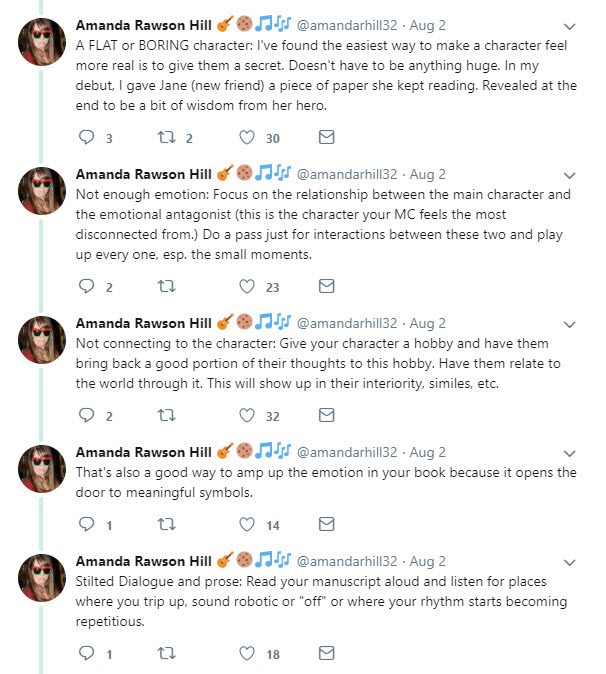 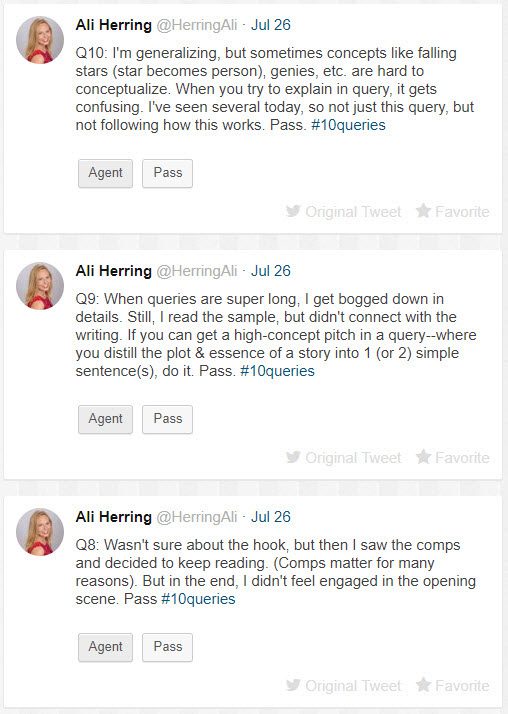 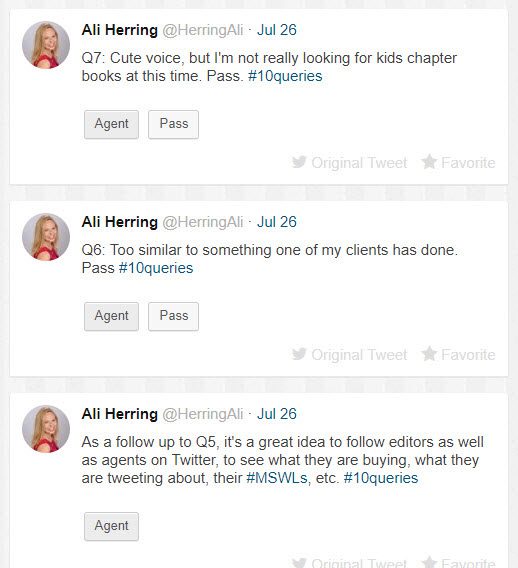 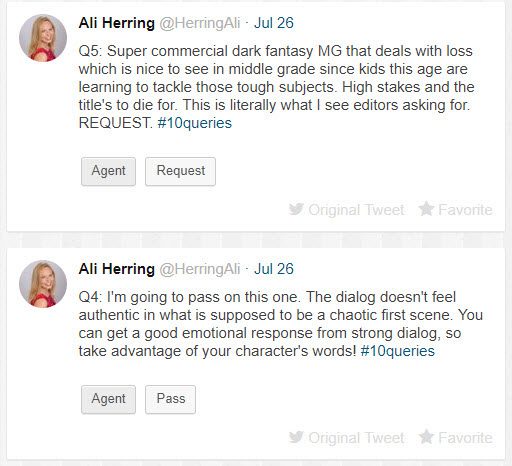 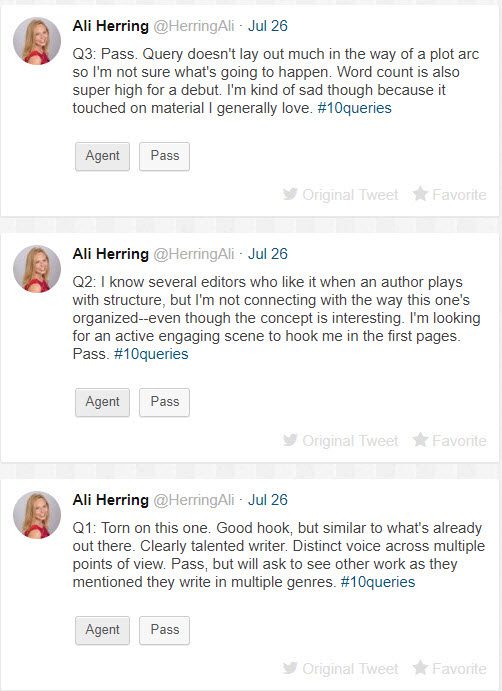 Here are some “announcement” posts I found – these are great because they’re usually how the book was sold, so these are SUCCESSFUL pitches.

Anita Kushwaha’s ASHA & MALA, an #ownvoice work pitched as Secret Daughter meets The Memory Keepers Daughter, about a young girl of Indian descent whose life is suddenly turned upside down when she learns about her past and searches for the answers to a deeply buried secret that threatens to tear her family apart.

Diana Gardin’s new romantic suspense, a spin-off of her RESCUE OPs series, about a former Navy Seal and bad-girl turned cop who begrudgingly team up to infiltrate a luxury car theft ring and find that their off-the-charts physical chemistry could mean sure-fire implosion of the entire task force’s mission.

Emily Martin’s third and final book in the CREATURES OF LIGHT series, to follow WOODWALKER and ASHES TO FIRE; as war threatens, a woman must unravel the secrets of her country or risk the destruction of everything she holds dear.

Erin Beaty’s books 2 and 3 in THE TRAITOR’S CIRCLE series to follow The Traitor’s Kiss (formerly The Matchmaker’s Apprentice), in which two kingdoms go to war and clever Sage is forced to fight her way through a bloody battle to ensure peace, and rescue her love, in this explosive trilogy full of espionage, intrigue, and romance.

Cindy Wilson’s STING, pitched as a retelling of the Count of Monte Cristo, in which a teenage girl escapes prison to take revenge against the best friend who framed her, and PAPER GIRL, in which a teenager who hasn’t left her home in over a year finds the courage to live and love again.

Amber Hart’s IN TERROR AND SHADOWS, about a girl from the deep swamps of Georgia who falls for the town rebel, who may or may not be a liar, but when the dead bodies of girls from their school start piling up, she’s left to wonder if lying is his only flaw.

Darin Kennedy’s THE STRAVINSKY INTRIGUE, the sequel to THE MUSSORGSKY RIDDLE, about a psychic who fights her way through the worlds of Stravinsky’s The Firebird, Petrushka, and The Rite of Spring within the mind of an adolescent boy in an effort to uncover the cause of an epidemic of catatonic young girls, all of whom are patients of her psychologist boyfriend.

Erin Beaty’s THE MATCHMAKER’S APPRENTICE, pitched as Jane Eyre meets Mulan, with a who’s fooling who twist, about an apprentice in disguise and the soldier she gets too close to while a bloody civil war threatens their safety.

Kate Mary’s LETTING GO, the fourth book in the College of Charleston series, about a twenty-something college student who has managed to get out of her childhood home and away from her hoarding mother without anyone finding out about her past, when she meets the perfect guy who might just take up too much room in her clutter free life and force her back into the mess.

Emily Martin’s WOODWALKER, in which an exiled ranger is recruited by a queen in hiding to lead her through the mountains and back home in order to reclaim her throne.

They say no man can rob a dragon. Good thing I’m not a man.

There’s an underground magical vault, protected by sorcery, security cameras, guards and whatnot. Think of the most impenetrable place in the world. Now triple it.

Here comes the bad news. It belongs to a dragon, and I was hired to break into it and steal his hoard. Suicidal? Insane? Maybe, but… actually, there’s no but. It’s suicidal and insane. Still, fortune favors the bold. Let’s hope fortune has a good disposition toward the crazy as well.

I might be an alchemist extraordinaire, and the best burglar on the East Coast, but this is not a solo job. I’ll need a team for this one. Accompanied by a powerful sorcerer, a fortune teller, a scam artist, and a hacker, I embark on the heist of the century. If we succeed, we’ll be legends. If not – crispy dragon snacks. (Stolen Soul)

I try to keep a file of great blurbs to inspire me, but be very careful not to copy or borrow anything from anybody else’s blurb!

Need to promote and advertise your book?
Click Here