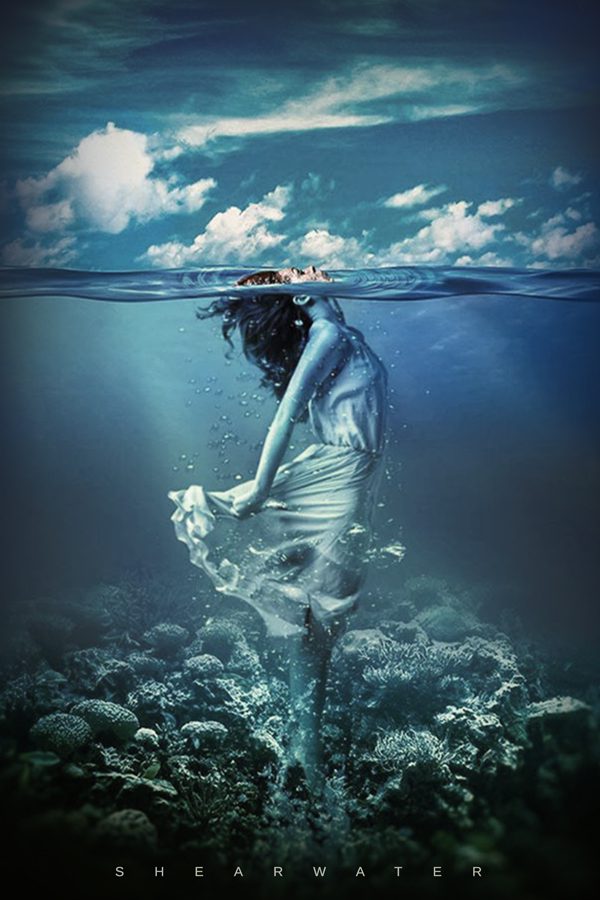 UPDATE! I no longer recommend Thunderclap or similar programs – if you want people to support you by taking one action, there are better things to ask of them (like leaving a review of your book, sharing your book on their blog or website with links, etc). Social media isn’t really the place to sell books and promotional content doesn’t work that well – so even with a million-people reach you will probably be disappointed by results. I should have written a “follow-up” post much earlier about the results of my campaign. Basically for a free promo, do list-trades with authors in your genre, or book promotions on the book promo sites with relevant email lists. You want about 5000 downloads of ideal readers in your genre.

During your book launch, you want to be everywhere; you want everybody to share and retweet your message, but it’s hard to get all of the scheduling worked out, and then you have to remind and nag people. That’s why some of my successful non-fiction writing friends, with large platforms and friends with big platforms, use ThunderClap.

I’ll admit I didn’t “get it” at first and was reluctant to help promote someone else’s book, but I’ve seen the merits and am going to test it out for the launch of my first novel.

Basically, ThunderClap allows you to write one short message or link, set a date, and other people can sign up to help you share it. They sign up once, give permission, and on the day of, Thunderclap automatically sends the message using their accounts. That means they don’t have to do any thinking or remembering, and you can also ask people a long time in advance, and build up your reach.

ThunderClap makes it fun by tallying up your united reach: so 100 people with 10,000 followers each would reach 1million people.

I may do things differently if I were promoting a paid book launch (at 99cents) but to do that well you need 25 or so reviews up first… although actually I’ll get that many even though I’m doing a free campaign. I wouldn’t normally, but this is my first book, so it’s platform building: I want the success of this book to make future books much easier to market.

How to do it

Setting up a campaign is pretty easy, you can see the one I’ve made here. The message isn’t super yet; I will need to test out messages using Google Ads to see which short text message gets the most clicks. But I can keep working on the message.

If I don’t finish my book in time, I can also delay the launch date, though I’ll have to upgrade from free to $45 to do it. 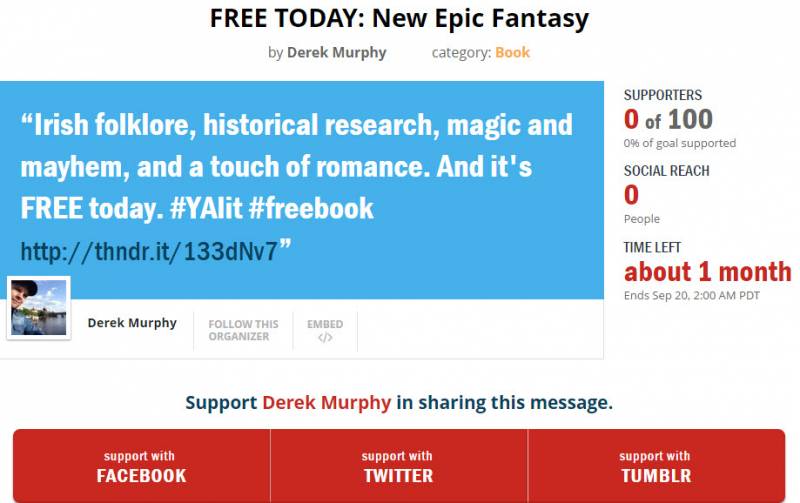 You’ll also have a space to write a message to the people supporting you (which will be different from the one that gets sent out). You want to introduce yourself a little, and your goals. 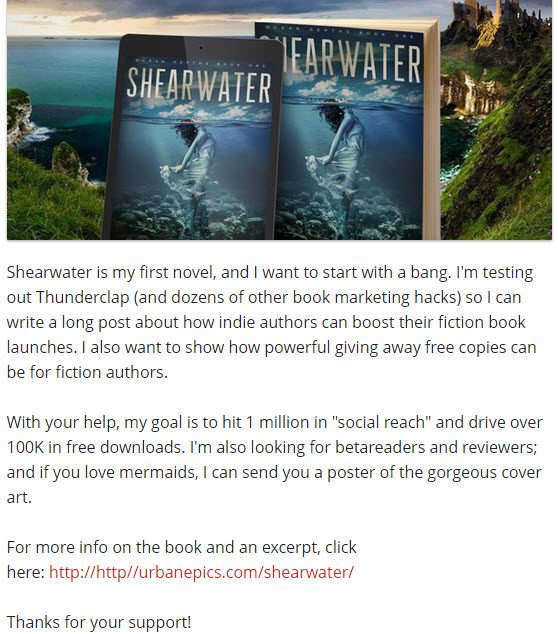 I may actually change the “free book” tweet to something more exciting, like “Help an indie author give away 100,000 FREE books,” though that may sound too desperate: the important thing will be communicating quality, so I hope the graphic elements with the cover will get sent out with the message.

It has to be something people will feel comfortable sharing (more than comfortable, they should be excited to participate) and not spammy or promotional. It needs to have purpose and meaning.

But why would anyone support you?

It’s nice to support the success of other authors in your genre; you want to be careful not to share crappy books (and I’d never ask anyone to do that: I’ll provide a full copy or at least excerpts of the book so they can check it out before committing).

But if you’re building up an audience of paranormal romance/YA urban fantasy readers, you need to be finding and sharing great content with them – content that isn’t just about you.

If you don’t write in the same genre, you can use Thunderclap for your own projects but I wouldn’t ask you to support mine: you never want to give your followers stuff they won’t be interested in. (On the other hand, that’s why changing the tweet makes sense: even if nobody is interested in my YA PN romance, lots of people may be interested in how I’m going to use ThunderClap to drive 100K free downloads during my launch).

So people might support you because sharing your content is good for their platform, or because you are doing something interesting, or because they want to trade favors (maybe they’ll support you this time, thinking that when they try out Thunderclap for their books later, you’ll do the same for them).

But that may not be enough…

So I’ll probably also set up a thankyou page, where people who supported the campaign can send me their address and I’ll send them this large print of the cover art. I removed the title and info to make it a better poster; something people will actually want on their walls.

It’s a nice enough image, that I could promote this to teenage girls who like YA paranormal romance on Facebook and offer them a free poster, shipped to them, in exchange for supporting the campaign on Thunderclap. They get something for nothing. The posters go out everywhere and do constant marketing for me. (I’ll probably also trade posters for book reviews, so if someone wants one later, they can just buy the book and review it for a poster). 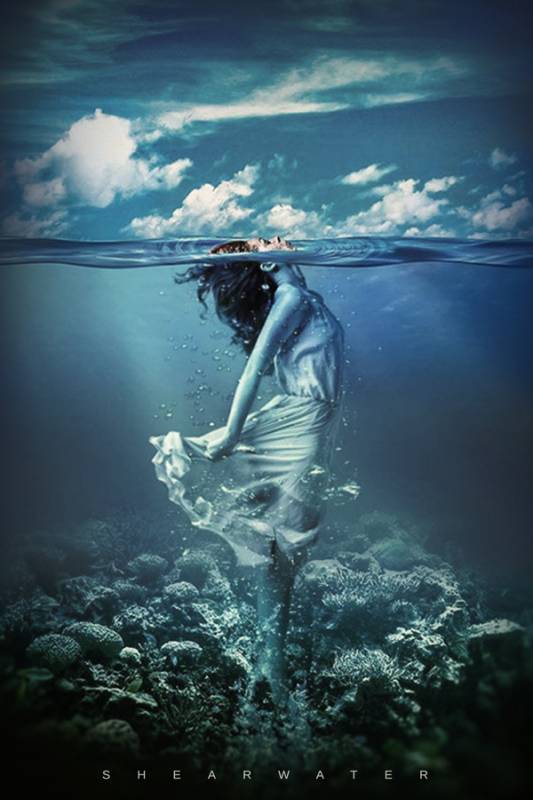 I’m not exactly sure how it will all play out, since this is my first time and I’ll be experimenting with the whole process, but if you want to be involved and see how a campaign works from the inside, it’s free and easy to sign up:

Help me get 100K downloads during my book launch!

You’re only committing to one tweet or share, and I promise it will be clever and interesting and not spammy (plus it will go out at 2am – you won’t even notice it!).

And you can totally have a free poster.

I’d like to see that “Social Reach” section get up to 1 million before my launch on September 28th; if done well that should drive a lot of downloads. But I may need to change it to “Get a free poster” or something a little more enticing than “free book.”