How to revive a book when sales slow down

I’m doing a lot of things right with my book marketing, but it’s hard to do everything perfectly.

Plus, I know that sales are limited by demand – so the fact that one of my books sells 10x better than another one hasn’t bothered me too much. I figured mermaids (Shearwater) just weren’t as popular as dark fantasy (Scarlet Thread has been #1 in that category for months).

HOWEVER, I was used to Shearwater sticking in the top 10,000 range, and in the last few days my rank has been slipping, so I’m trying to save it.

First, I needed to identify the problems.

The first problem is the description, which I always knew wasn’t very strong. I made some changes, and the rank dropped even more. Made more changes, it tanked again. Changed a few things one more time… waited long enough to see results, now it’s up a bit.

Obviously you should really only make one change at a time, and you should give each change 4 days to compensate for random fluxes in the market (some days are just slow!). I’m impatient though, so I made changes quickly.

Some things I changed: I started with a better bold teaser. I’d tried several things.

The last change was “My name is Clara Clark and someone is trying to kill me.”

That didn’t work so well. So I fixed it to,
“They found the dead girl on my birthday. And I’m not entirely sure the boy I just tried to kiss didn’t kill her.”

I think I can tighten it even more, to:

“The dead girl came to my birthday party. And I think I just tried to kiss the boy who killed her.”

Also, the description was too vague. Every young adult novel talks about mysteries, murders, dire consequences, adventure. Mine needed to be specific. (But not TOO specific – in one recent variation, I named the sides of the conflict and what they were after, probably giving too much away).

I also increased the romance element a bit, by calling out the hot mysterious guys, and mentioning her heart.

The second problem is that I have two books competing with each other. The first is part one, which was permafree and is now 99cents; it competes with the full book (parts 1 and 2) and is confusing. I think Amazon is probably penalizing both, unsure which to show readers. The solution is to put part one back on permafree, to hook readers into buying the rest of the book. That should help a lot; I can do that in a few weeks when my term with KU is up.

The third problem (I think) were competing AMS ads

I’m new at using Amazon ads – someone said I could just replicate my ads to spend more. Others told me identical ads will confuse amazon and actually hurt rank. Since I boosted my budget and replicated my ads, my rank starting slipping quickly. I paused a couple of the under-performing duplicate ads and things have picked back up (back under 10K…. but that could also reflect the changes in the description).

The fourth problem is the cover.

Most people tell me they preferred the original to the new one I made for the full book. I just thought it wasn’t photoshopped that well. I made the new one and it’s technically better. It’s clean. I knew I was making a mistake by adding too many details – the rose and the ribbon. All in all, it’s a very nice-looking cover but doesn’t pack the same emotional punch as the first. Also, the purple is striking but a little wrong for a mermaid book (readers expect a mostly blue, water cover). And the font is wrong for the genre (paranormal fantasy)… 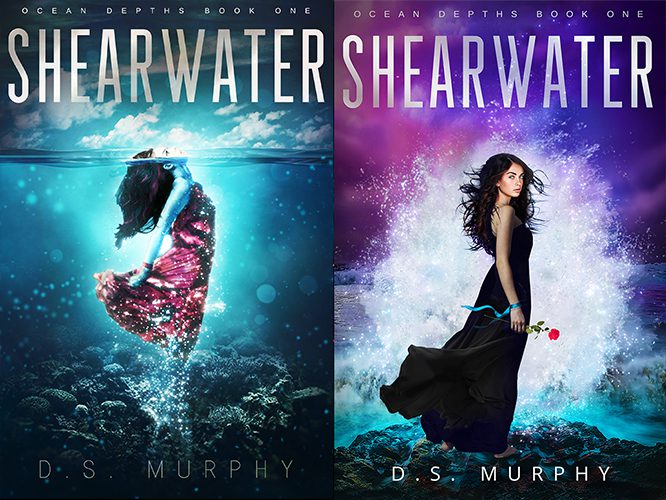 So I made this one, with a few scraps I had lying around. I always wanted a very dark greenish cover like this, and it works well. If you zoom in you can see that it’s poorly photoshopped, but it should work well enough and (I think) is more emotionally gripping than my first two covers. I’m adding the animated cover I made here, because it’s awesome. Don’t be afraid to change your covers – a cover change alone can be a new reason to talk about your book.

I waited a few days to see the results, and then I did some promo.

First I used the last of my KU free days – I only had two left. I booked promotion on FreeBooksy. I was too late to book on most promo sites, so I spent $200 on BookBub ads and $100 on Amazon ads. I also tested out massively raising my AMS budget to $50 a day, and used the new hook, “The dead girl showed up to my party…”

I wanted the PAID rank to stick well after the free campaign was over, so I made a plan to gift 100 copies (from other people), which should boost rank – and the RIGHT people – by trading favors with other YA authors. I gifted 20 copies of their books to my audience and they did the same for me.

During my free campaign, I gave away about 5000 books, mostly by emailing my list and doing a little Twitter promotion with the new cover. That sent me into the top #100 in free.

Then I changed to 99cents, had friends gift copies of my book to their audience, and ran a promo on Fussy Librarian. After selling about 100 copies a day for the last 4 days, my rank is holding at around #3000 in the paid store. My goal was to keep it under 5000, and I think once I drop the first part of book one back to a permafree book, I can pull that off.

PS) You can get my latest book on book marketing, Guerrilla Publishing, for free here.