How to REALLY self-edit your novel after Nanowrimo: 8 rookie mistakes to avoid! 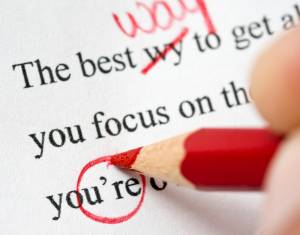 I used to be a full-time editor. Since then, I don’t often read amateur/mediocre books. I rarely have time to read as it is, so I only read brilliant, perfected writing. Unless I’m helping somebody out with a review, cover, or something else – in which case the book may be suffering from common rookie writing mistakes.

I decided to list some of the things that bother me, so that when you begin editing your first draft after Nanwrimo, you know where to start.

Your book needs conflict, and your main character has to be sympathetic from the beginning. We need to root for, pity and bond with the main character, and hate and loathe the opposition. There must be a villain, or a source of conflict, or a foil – somebody who for some reason makes the protagonist feel bad.

The protagonist should doubt him/herself, so that through the story they can gain self-confidence and existential security.

This needs to be done quickly. No matter how cool the action scenes are, if we don’t know who to root for, if we don’t feel an emotional connection to the outcome, we just don’t care. Before I know which characters are good or evil, when they’re all strangers to me, I wouldn’t care if any of them got hit by a bus. Which means I’m not invested in your story. Before you blow crap up and have shoot outs, readers need to know, love and care about your protagonist.

2. Start with the action.

Almost all scenes/chapters need to start in the middle of the action. Cut out all the lead up stuff. Cut out the explanation, back story, exposition and description of the scene. Start in the middle of a tense dialogue. Start with an attention hooking line. Start with close-up, in focus zoom in of drops of blood, sweat and tears. Hook attention first – then back up, fill in the details, slow down and set up the next major conflict (then cut the scene and start over with the next one).

Normal people laugh when they’re happy. They might be short-tempered and snarky when they are angry. But they rarely “sob hysterically”, “shriek uncontrollably”, or “shake visibly.” People don’t let their emotions run wild – especially around a whole group of other people. And they don’t flip flop between happy and deathly depressed at every unexpected catastrophe. People usually don’t react at all when bad things happen – they are in shock. They hold it in, do what needs done, and only let it sink in when they have time to process their grief. So check how often your main character (or any characters) cry, sob, scream, shriek, etc. You might allow them one emotional display per book (although I wouldn’t allow them any. Cut all that crap out, replace it with subtle melancholy, emptiness, inability to experience joy).

It’s the easy stuff we tend to miss. Even if we can spell big words correctly backwards, you’re going to mess these up a lot: use the search/find feature to search for these one by one and check them all. If you notice something else simple you screwed up, search for it – you probably did it more than once. Also, we tend to have ‘bad batches’ – so if you find any errors, super-edit that section, because there are likely to be more errors nearby.

Adverbs are bad. They are lazy writing. Anytime you express what someone did and how they did it by adding an -ly (said excitedly, left resolvedly, prayed devoutly…) you’re missing the chance to write well and picking something easy. A lot of these phrases will be meaningless (like “laughed happily”). Or they will be confusing. So use your search/find button for “ly” and track them all down. Does it need to be there? Is there another way you can show how they did something without using an adverb?

“Said excitedly” = “said, a grin spreading at the corners of his mouth and his body quivering with expectation.”

“Left resolvedly” = “stamped out of the room, slamming the door behind him.”

Seriously: search every one and try to get rid of them all.

Now use the find/replace feature to search for “!” and “?!”. People aren’t usually very excited, and we don’t shout a lot. That means you really don’t need to use exclamation points, like, hardly ever. But a lot of indie authors have a bunch of characters saying things like “How dare you!!!” or “Are you crazy?!?!”

Lots of punctuation is no substitute for good writing. Not only is it unnecessary, it’s often used to mask over very bad dialogue – so searching for your “!” can indicate poor dialogue that you need to strengthen.


I know it’s a raging controversy, but I don’t care. Use find and replace, hit the space bar twice in the first field, and once in the second field, to replace all your double spaces to single spaces. You don’t need any double spaces, anywhere. (Unless you are submitting a manuscript to a publisher/agents, and they specifically request double spacing because it gives them more space for notes – but if you’re self-publishing, you don’t need them).


Unless you’re writing a first-person narrative, the narrator should be invisible. So when you use big, strange, fancy, unusual words, it interrupts the action and draws attention to the narrator.

This especially happens with repetition – a novel I read recently used “purchase” in the sense of “to gain traction.” The first time I thought it was a bit odd. The second and third time I thought it sounded stupid. You are likely to have favorite words that you like to use, but when you pick a fancy word instead of a common word, it will stand out. Characters themselves can use them in dialogue, but you shouldn’t use them.

Here’s a cool online tool you can use to check the frequency of all the words you used in your book:

Just paste all your text there and look at the most common words, to see if you have any bad habits you should break.

Hey there! I'm a philosophy dropout and book cover designer with a PhD in Literature. After spending a decade as a starving artist, I vowed to create the life of freedom my restless spirit demands. I covet a cabin full of cats, where I can write young adult fantasy novels and do a few editorial critiques to pay for my cake addiction. Sometimes I live in castles. FREE GUIDE: Book Marketing is Dead.
@creativindie
Previous Why should anyone review your book for free?
Next Everything you wanted to know about advertising your book (book promotion through Google, Facebook and More)

How to edit a book: the five stages of editing your novel needs