I’ve been working with authors for a long time; as both book editor, book designer and sometimes even publisher. I’ve helped thousands of them try to improve their book enough to sell – either to an agent, or to self-publish and actually be successful.

During all that time I’ve met a lot of authors whose books will fail. They’ll fail because there is no market for what they are selling. They’ve written something nobody wants. And that’s fine, sometimes you’ve got to get that one out: the one you’re really passionate about.

But then, I counsel, once you’ve done your best, put it away and write another with more popular appeal. Write a story that people enjoy, that they’ll talk about with their friends. A book that matters to them. Most authors don’t appreciate this practical, businesslike approach to writing.

I always feel like I’m on the defensive, like I’m the one who has to defend my crazy ideas from charges that I’m “selling out” or “writing crap just to make money.” Here’s a comment I got today:

Write books people like; that’s great if you want to write popular fiction or pulp fiction or write for Donald Trump’s campaign. Novels can be a treasure and in themselves; not written to sell or to cheapen to appeal to the common denominator.

As I started to reply to that comment, I realized I had a lot to say – and strangely, a new appreciation and insight on the subject that I’ve only picked up recently, reading Story Grid by Shawn Coyne (co-authored by Steven Pressfield.)

I understand where John is coming from. It’s mostly the artistic, literary approach to novel writing that’s become the passionate ideology of millions of would-be writers. Here’s the problem with it:

1) Being afraid of pleasing people.

2) Trying to sell it anyway.

If you’ve written for no market, how in the world could you possibly expect your novel to do well, make any money, or even get published these days? Publishers are businesses producing products for consumers. 20 years ago, those consumers would all buy whatever the literati recommended, so they could prove how clever they are. People are becoming more honest.

In Story Grid, there’s a whole bunch of great quotes on what writing actually involves, and why most writers can’t sell manuscripts to agents or publishers. It’s not because the work is too brilliant. It’s because it doesn’t properly fulfill reader expectations, because it doesn’t hit all the essential scenes of a particular genre. It’s disappointing. A let down.

Who are you writing for – yourself? Why? Isn’t that a little self-centered? Again, that’s fine. Writing can be amazing therapy. Write your book. Exorcise your demons. Heal thyself. But if you want to be a career author you need to write books that people like to read. This is “selling out” to the “lowest common denominator” (if by that you mean, figuring out who will actually read your book, and caring enough about them to make sure they are satisfied with it, rather than disappointed.)

The really interesting thing about Story Grid (truly, this fascinates me to no end) is that Shawn Coyne is Steven Pressfield’s editor. Steven Pressfield, meanwhile, is the reason most authors think they can just do the work, and that considering the market is “selling out.” Steven calls people who consider the market “hacks” in The War of Art.

In 2016, however, Steven published “Nobody wants to read your shit, why that is and what you can do about it…” so it seems he’s becoming more aware to the pragmatics of writing books that matter to other people. 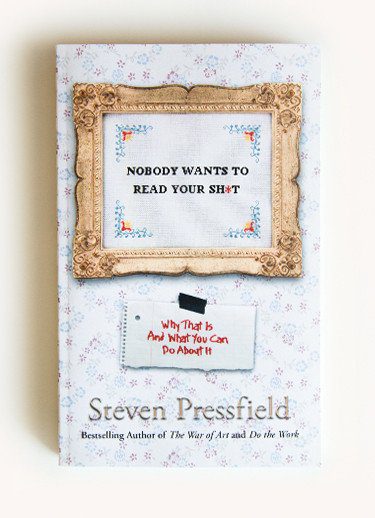 But most writers love the War of Art because it tells them to keep writing what they enjoy, even if they’re scared or have doubts or can’t sell… just keep creating! So you get all these authors who have finished their book, and now they’re trying to get published, or find an agent, and they need an amazing editor like Shawn who’s going to straight up tell them, “This book doesn’t work. It isn’t good enough. You didn’t plot it well. It’s unsatisfying. It doesn’t deliver on the promise of the genre.”

And you’ll pay your editor thousands of dollars to tell you those things, and because you’re paying them so much money, you might listen to them. And if you make all the changes and structure your novel right it’ll be so much better and you will have a much greater chance at success.

But it would have been so much easier if you’d have just figured out who you were writing for first, did research on what things people reading that genre like and appreciate (what Shawn calls “Essential Scenes” – like the hero at the whims of the bad guy scene in thrillers).

A Genre is a label that tells the reader/audience what to expect. Genres simply manage audience expectation. – Story Grid

In the old days, the author went into his cave, retreated from civilization, and wrote a book. Then he came back and gave it to an agent, and a publisher. They edited the SHIT out of it. Not only all the typos, redundancies, clumsy sentences, etc – but also the organization. They made it better. They made it salable. A great editor was a proper genius, and knew more about what makes a story work than any living author.

For more on this relationship, you should read my post:

Authors have the ideas, but they don’t usually plot or plan in the mechanical sense that editors are used to. Editors take good ideas and make them amazing books. But it doesn’t actually work like that anymore: publishing houses no longer pick up books that “kind of work, but need fixing.” They’ll sign books and mostly just let them run, confident that they’ll sell based on the author’s fame. I’ve heard from several bestselling authors recently that they got a publishing deal because they wanted their book to be edited, to be fixed and improved – but instead the editor just stamped it “good enough” and it went to print.

That’s why Shawn says authors need to be their own editors. Even if you plan on hiring an editor later, you still need to figure out the demands of your genre, and make sure you tick all the right boxes. Learning how to self-edit to make sure your story resonates with people is not selling out. You are making your story better, and that will result in more success. And not to the “lowest common denominator only.”

Maybe you’re writing a dark and tragic literary YA novel about cancer – do you want it to be a flop, or a smashing success? There is already a collective of readers who are eager to enjoy and appreciate your book, but only if you take the time to find out who they are and make sure it satisfies them.

Every writer wants to be read. And the best way to learn whether your Story is reaching people is to tally the number of them willing to part with their hard-earned cash to experience your work. -StoryGrid

The only way to write a Story that works is to know exactly what Genre(s) you are exploring and deliver exactly what is required from those Genres. -StoryGrid

You must know what your reader is expecting before you can possibly satisfy her. And yes, if you are writing a Story, you must think of your audience. A Story means nothing if it is not experienced. -StoryGrid

Perhaps that’s an impossible task: authors and editors are different kinds of people. They are exceedingly different skills and thought processes. I accept that some authors will never be able to self-edit effectively. On the other hand, I think most authors are reasonably intelligent, so they could probably learn to self-edit if they wanted to. The problem is, they don’t want to.

To me that seems like a guy only caring about his own satisfaction. He is writing to get off. He doesn’t care about the receiver of his efforts. He just wants it to feel good to him, but he’s too self-centered to ask, “What do you like?” When he’s done, she’ll probably never call him again, and he’ll have to seduce another reader he can screw. Until they all start talking about what an asshole he is, and then he won’t be able to get anyone to read his book.

Maybe that’s fine for Alpha Male, Lion Hunting, Whiskey hunting Manly Men like Hemingway. You may think you can get away with it too. And sure, it’s possible. It happens sometimes. If you are committed to old school publishing and willing to die trying, just keep writing your book the way you think it should be and piss and spit on the opinions of your market – because what do they know, goddamnit.

Personally, I don’t see anything artistically devious about knowing who you’re writing for: knowing the rules of genre convention, plotting and novel structure makes it easy for me to publish a lot of books, quickly, that satisfy readers. Will they become the next Hunger Games? Maybe not – but the potential is there, because I’m comfortable writing popular fiction. If you’re writing literary fiction with no market, and hope to become the next Jonathan Franzen, you should be aware of the fact that Jonathan and most literary novelists are still using form and structure, and the expectations of literary fiction to write bestsellers that make their particular audience happy. In other words, they know exactly what they are doing, and literary fiction isn’t all that different from popular fiction: you have to know the rules of your game.

An author who isn’t willing to learn the rules of the game is like a guy showing up to Yankee stadium in the middle of a baseball match, wearing underwear and carrying a giant rubber ducky, who screams that everybody is playing baseball wrong and he is going to FIX it. And that’s exactly what most authors are doing right now (you’ll recognize them when they say their book “defies genre” or “can’t fit into any category”).

Nobody else is going to edit your book for you. Even if you have an editor or pay for a great one, they’ll be able to take it so much further if you do the work and learn some of this stuff yourself first. Everyone else will do their job but won’t be committed to making your story amazing. That has to come from you. You have to know your audience and your genre to pull it off. Buy a few 2.99 ebooks, download the free plotting maps and grids, make sure your novel delivers – and rewrite the stuff that doesn’t work!

Go read StoryGrid. I also recommend Plot Perfect and Story Engineering. And if you’re still having trouble, I wrote a little guide to creatively producing work that matters.