High price = higher satisfaction: except when selling books (+a defense of Hugh Howey)

A couple nights ago I met up with Hugh Howey Fan Fic writer Wes Davies over pizza and beer in Tainan, Taiwan; as indie authors we discussed marketing and pricing strategies. The best plan (I continue to affirm) is cheap or free – especially at the beginning, and especially as a lead-in to a series. Lower prices = more downloads, more chances for reviews and word of mouth traction. It’s not about the money, it’s about growing a platform. Cheap pricing is a marketing strategy. Even though Mark Coker at Smashwords analyzed the market and concluded that $2.99 is the “perfect price” (with the balance of downloads generating the most income) I counter that greater income now is not as valuable as more readers. Like the Facebook movie: “A Million dollars isn’t cool. You know what’s cool? A BILLION dollars.” Don’t worry about “monetization.” Instead, become cool. But there’s an even better reason to start off pricing low: because you will get better reviews. This isn’t straightforward, and in fact in most other consumer areas, higher prices lead to higher customer satisfaction. They’ve done studies that show, the more expensive the wine, the higher our appreciation: science proves we actually PHYSICALLY enjoy the higher priced wine than the identical wine we think is much cheaper. In most businesses, high end, luxury products result in higher customer satisfaction. When people spend more money, they’ve rationalized the decision. They are prepared to love it. They pay more attention to the details.

For several years I’ve had a hunch that, although a high price would make people trust and value your book more, they would also be more critical, leading to negative reviews. Whereas with a cheap self-published book, readers start without high expectations, so they may more easily be “pleasantly surprised” leading to better book reviews. And now the data backs me up: 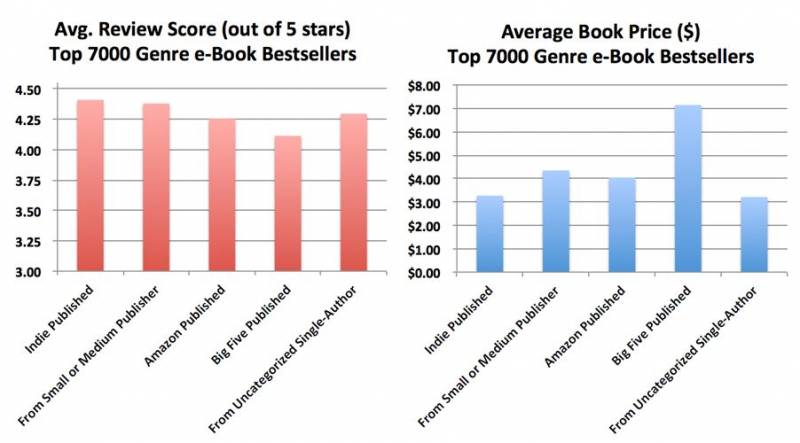 A new report from AuthorEarnings.com shows that lower priced, indie published books receive higher reviews than higher priced, Big Five published books. It may be because indie authors are more supportive of each other and more direct about asking fans for reviews. Indie authors are usually more responsive and in tune with their fanbase. They often seem more genuine and approachable than traditionally published authors. But those are just guesses. The data speaks for itself. Although the ‘average book price’ is just a little over $3.00, I’m willing to bet that a significant portion of those positive reviews are coming from the very low (.99, 1.99, 2.99) books – cheap books get more readers and often more reviews. Having people “discover” your book without a bunch of media hype, false flattery or self-promotion also tends to lead to more positive reviews. Asking people to review your book and give it 5 stars is a misstep that leads down the road of failure. All reviews, even bad reviews, are good reviews. If the balance is overwhelmingly negative, then you’ve learned you’re either: A) Marketing to the wrong type of people B) Encouraging misleading reader expectations, leading to disappointment C) You wrote a book there’s no market for D) Your book is bad. Stop marketing it and go write a better one.

Can we trust the data?

There’s been a lot of controversy over this data, and criticism for Hugh Howey and the conclusions he’s drawn such as: “Our data suggests that even stellar manuscripts are better off self-published.”

The data was taken from Amazon only, and from one day only – so it’s pretty limited and can’t forecast specific trends (if an author is selling well today, it’s no guarantee that they will sell the same).

There’s an in-depth and well written critique on Dear Author called “How (not) to lie with statistics.”

But I think the criticisms fall short.

Critics comment that Amazon is not the publishing universe and that there are lots of other places to sell books.

Except, it totally isn’t.

Book selling across platforms doesn’t vary nearly as much: it mostly comes down to a simple formula.

That formula is going to be about the same no matter what platform we’re on.

For every 100 people who see that book, let’s say 10 buy it. Unless the cover, reviews or description changes, that ratio isn’t likely to fluctuate much over time (hence, the necessity of marketing, to increase the traffic – which most authors do instead of fixing the cover or sales description).

HOWEVER – the majority of books right now are selling much faster as ebooks. People are buying more ebooks.

And most ebook purchases come from Apple or Amazon – and the way people buy those books (finding the book, looking at the cover, reading the reviews, reading the description, downloading to their device) is just about the same – and the book’s pricing should be the same across platforms.

SO drawing conclusions about ebook sales from Amazon is not a bad move, since there won’t be much discrepancy from other ebook sites.

Print books are a little different, because SOME academic books will be bought by special distributors (ie to libraries) and SOME print books will get into book stores, which is a different experience and should really have it’s own data (although it’s much harder to get the statistics, such as “how many people per day enter the bookstore and are exposed to THAT book?”)

But since nearly all self-publishers will use POD and sell through Amazon or online bookseller sites, their POD print books won’t differ that much from the ebook stats.

Traditionally published books don’t do as well online, because A) their ebook prices are comparatively much higher and B) few people want to order online and pay shipping when they can just go buy it in a store. So generating data about book sales from Amazon isn’t likely to be very accurate – except the fact that many bookstores are going out of business because people prefer to A) buy online where things are cheaper or B) buy an ebook.

So one could argue that the outlying data doesn’t matter very much because there’s a definite trend towards ebooks and online shopping; in other words though the data may not be totally accurate right now, it’s likely to become even more accurate as Amazon continues to grow and eat up a bigger share of book sales.

As for conclusions – sure maybe drawing definitive conclusions is “logically untenable.” But what good is the data if we don’t look at it and guess what it might mean for us as authors? What’s the point of being reserved, impartial and slow to draw conclusions when the publishing world is changing quickly and we all want to write and sell books as quickly as possible to make as much money as we can (agreed, if money or book sales is not your primary goal, then the data doesn’t matter much – do whatever you like).

What do you think about all this?

Hey there! I'm a philosophy dropout and book cover designer with a PhD in Literature. After spending a decade as a starving artist, I vowed to create the life of freedom my restless spirit demands. I covet a cabin full of cats, where I can write young adult fantasy novels and do a few editorial critiques to pay for my cake addiction. Sometimes I live in castles. FREE GUIDE: Book Marketing is Dead.
@creativindie
Previous 300+ Fool-Proof Fonts to use for your Book Cover Design (an epic list of best fonts per genre)
Next Medicating procrastination: how “smart drugs” can keep you motivated 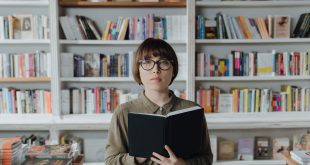