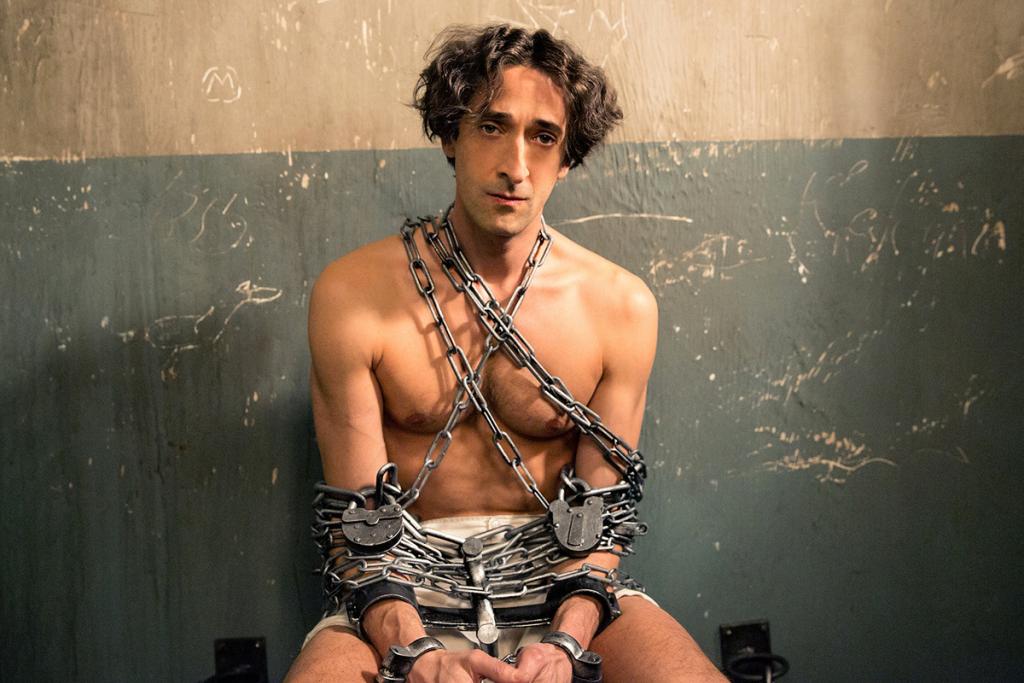 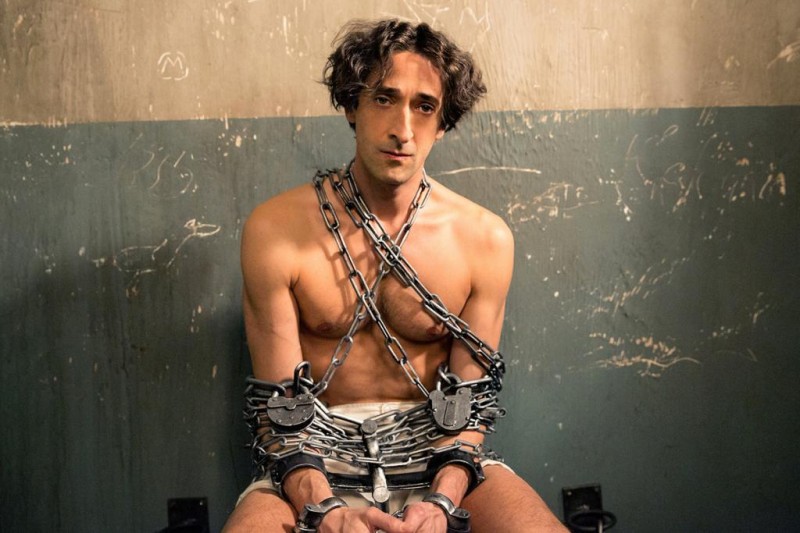 I’m at the airport in Houston, waiting for my connecting flight back to Portland (after spending a few days talking about book marketing in Cleveland). Since I can’t get much work done on the road, I just watched the new Houdini mini-series starring Adrien Brody.

It shows Houdini in a mostly sympathetic light: he’s a struggling self-starter, and entrepreneur, a show business performer. People stop coming to see him in theaters, so he he decides to “bring the theater to the people” by taking his act outdoors. He gets world-famous for putting his own life on the line with daring outdoor stunts.

After losing his beloved mother, he seeks out mediums and spiritualists to help get in touch with her in the afterlife. But as an accomplished magician himself, he sees right through their shams and tricks and exposes them for frauds. He even goes after the wife of his friend Sir Arthur Doyle – who used automatic writing, but failed to remember Houdini’s birthday (as his real mother would never have done).

For Houdini, this was the last straw, and he went on the radio to say:

“I don’t claim that Lady Arthur is a fake, but she is deluded, probably under the influence of her misguided husband. They have both caused incalculable harm; Arthur Doyle is a menace to mankind. I now declare total war on the spiritualist racket. I will devote my whole life to defeating their nefarious schemes to exploit a gullible public. I double my challenge: $25,000 to any so called medium who can convince me!”

Fabricating controversy can be a dangerous move, but there’s no doubt that it works. People love controversy and arguments. The main danger is that you are going to alienate people – but that’s OK, as long as you know who your true fans are.

Imagine the kind of people who are going to disagree with your beliefs, or actions, or position. Imagine what doubts or criticisms they would raise against you (if they knew who you were). Try to target a group that’s already very vocal, very popular, that has a lot of support – but a group which you and your ideal followers don’t like or agree with anyway.

Put yourself into the controversy and become a champion for the opposition.

I tend to shy away from controversy, because I’m a facilitator. Most angry tirades are founded on poor communication and misguided anger; they are baseless and easy to diffuse. But disarming the bomb won’t bring you any media attention.

If you want headlines, you need to set yourself up as a peer of already famous people with huge followings. Pick a fight. In my industry (publishing) I could pick a fight with Amazon, because a lot of people have strong opinions about it. For example, yesterday I saw an article that Amazon is buying up anti-Amazon url’s so that critics can’t use them later (amazonsucks.com, ihateamazon.com, etc.)

A really easy way for me to tap into that controversy and that trending news articles is to buy 10 anti-amazon urls and post about why I’m buying them (I’m very creative – I can think up dozens that they’ve never considered). And I might do that; it would bring a lot of traffic and polarize my audience. But I might not; because I sell my books on Amazon and if they ban me I’d be screwed.

But I could also take on other groups – I could write angry tirades against self-publishing.com or other large author services groups who charge too much and don’t offer quality service.

I could pull samples from the 25 top small presses and publishers, showing off their ugly cover designs, to demonstrate what a poor choice these options are to authors (since the cover will be the biggest factor in your book’s success, and small presses or services that charge a publishing fee skimp on quality design to make more money for themselves).

But even those ideas are too small. If I want to set myself up as an expert in cover design, I should offer a huge prize and a challenge: maybe $10,000 to any cover designer who can make a better cover than me for my next book (which would be pretty big publicity for the book, as long as it’s related to the contest). But that doesn’t have enough controversy.

Although my background is in philosophy and religious studies, my current platform steers clear of spiritual and religious matters, because it would be far too easy to alienate a huge chunk of my audience (which comprises believers in various gods, non-believers, skeptics and other ideologies). But for future books – like my PhD thesis on Milton’s Satan as revolutionary hero – those risks might be worth taking.

Anyway, you get the picture. Houdini went from stage man, common performer, nobody, to the world expert on debunking mediums and spiritualists; he set himself up not only as peer, but as judge to some of the most educated and well-respected citizens in the world.

Stay out of the storm

If that all sounds too risky for you, try this instead: find a controversy and become the mediator. Take something famous people are arguing about and write a post collecting all of their comments (from Twitter, Facebook, their websites, etc). Just curate the argument together, and suddenly you become a peer – especially if you add your own ideas and commentary, as long as they are part of your brand and platform.

Talking about famous people in general only works for gossip mags; but talking about what famous people are saying about your topic is an easy and brilliant hack to lots of traffic. And if you find a famous person spouting nonsense and bullshit about your topic, and you know better, call them out! Offer a challenge – ask them for a live debate. Give them some ridiculous prize or reward.

When Justin Bieber got punched by Orlando Bloom, I could have offered to send him an ice pack, or some boxing gloves, or a faceguard (if those were relevant to my business). I could have invented in iphone game called “take a swing at Justin Bieber” or a little punching doll with his face on it or something.

Pay attention to what’s hot and trending and how it relates to your business. Then take immediate action.

The dangers… if you court controversy, it can catch up with you. An upset fanatic can kick your ass in real life, and you can die (that’s what happened to Houdini). That shit happens. Famous people have crazy-ass fans. And Houdini was destroying people’s beliefs, which is especially likely to piss them off. 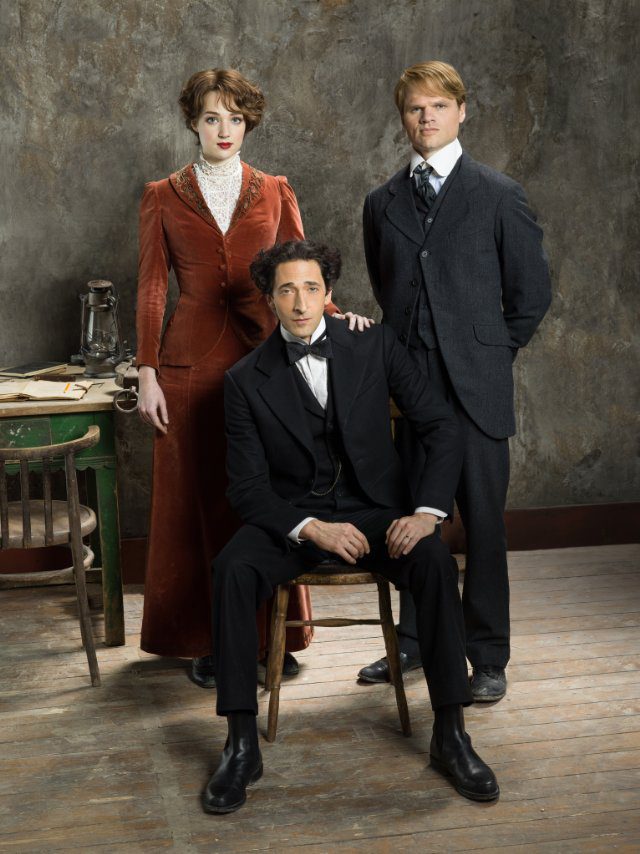 Houdini wasn’t just a performer. He saw himself as helping people. He takes their worst fears and overcomes them. He gives theme hope, mystique, enjoyment, happiness. He improves their lives and gives them something to talk about. You can’t just sell products anymore.

If customers are just buying products, they will buy the cheapest thing that does the job.

Instead you have to tell a story that fits the mind-set of your ideal customers. You have to sell them values and lifestyle choices. You have to inspire them, and offer perceived benefits that are totally unrelated to the product (think Coke: it’s still pretty nasty sugar water that rots your teeth and destroys your stomach. But they sell a shitload of it, because Coke’s brand associates itself with living a good, happy, full life).

You can’t sell art or books, you need to sell a story, you need to be part of that story and you need to invite fans to become part of your story with you. Your creative output has to have a purpose, a goal, a quest – it has to overcome conflict and risk failure so that fans can support you.

2. Give it to them for free

I just started reading The Curve: How Smart Companies Use Freeloaders to Find Superfans. The basic idea is that old school business (Ford style) was to produce a product that would work for just about everybody, and sell it at the lowest price. But now, with the internet, we can give a lot of stuff away for free, but then sell special, extra, very expensive stuff to our superfans.

Houdini was way ahead of his time: he “gave away” his free, public shows rather than trying to sell tickets to fill theaters. In return, he got hugely popular and famous, he became a household name, and Kings and Presidents asked him for in-person, private shows.

When he was exposing mediums, that wasn’t business. It wasn’t directly related to sales. But he was growing his authority and platform as a trusted expert.

For both authors and artists, and most other creative people, you need to find a way to do big, public stuff for free that doesn’t sell anything but gets liked and shared. The easiest way is to do something fun and crazy and new, but impractical and not easy to sell. That’s the stuff that will get you followers and headlines. Focus 20% of your time on those crazy big events, the rest of your time on your real business.

For example: Next year I want to buy a castle, and I’m going to need some serious traffic to hit my fundraising goals. To publicize it, my wife and I are going to travel Europe, castle-shopping and blogging about all the sites we visit. But we also plan to dress up in period costumes that match whatever castle we are visiting. And even better, my wife (as a fashion designer) is going to custom design and hand-make all of our clothes. Because we know that an article with 20 beautiful pictures of us in the clothes she made that match the historical castles will be internet gold, and get shared widely. It doesn’t directly sell anything, but it spreads our legend, gets people excited about our project, and will make it much easier to drive traffic to our Kickstarter page.

3. Put your life on the line

There’s a lot of competition these days. You can’t wade slowly into the luke warm water. You can’t “Get your feet wet.” You need to take the “ice water challenge.” You need to publicly demonstrate your devotion to a cause and through your actions spark other people to take up their own banners. You need to risk personal, physical, actual discomfort that people can see and experience with you.

For my part – that means doing more videos, so people can get to know me better; and also take big risks, like finishing 10 fiction books by the end of this year (when I’ve never yet published anything). Can I do it? Will they be terrible? This uncertainty and fear makes the project worth the attempt. Aim for the stars.

This is how you stand out and get people to care.

The Wife (a review of a movie about writing)

Making a living as an author (bestselling genres)

Are all creative people midnight owls? (dealing with insomnia as an artist or writer)