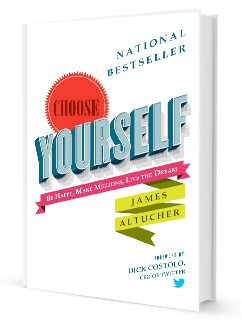 Choose yourself, be happy, make millions and other crazy ideas from a self-published bestseller 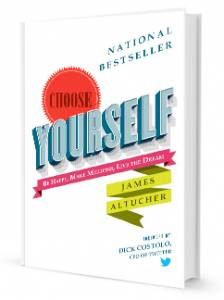 Recently I’ve been reading a string of books from successful entrepreneurs. All of them have a background in business, media, blogging and technology. Most of these books are successful because the authors put a lot of money behind them. Some of them have truly powerful ideas, even if most of the content is name-dropping and shoulder-rubbing with famous people, and the author’s personal background Doing Huge Things.

But there are lessons to be learned, if not from inside the books themselves, from the way people with money and connections are marketing and promoting their books. People with money and an established platform are choosing to self-publish, because it gives them more control and has a bigger payout. The one I’m on now is Choose Yourself by James Altucher, who just posted an article on his blog about publishing 3.0 which is well worth reading. According to James:

James spent $31,000 in all self-publishing his book: he picked the designers, editors, marketers and everything else. He paid much more than the average, but if you’re approaching your book as a business and you need to make a return, $31,000 isn’t too crazy of a number. He’s already sold 44,294 copies in the first month.

Approaching the book as a business, he also did some smart stuff like running Facebook Ads with possible titles to make sure his title was a clear winner (an idea introduced by Tim Ferriss, I believe).

Fortunately, he could have paid much less for editing, design and layout, and the marketing and promoting avenues he picked aren’t unattainable to those with a smaller budget. His cover is nice, but in that minimal/retro indie style that is popular with techies and hipsters. The book reads like a bunch of separate sections put together, and I managed to find one typo, so I think finding a comparable book editor for less (maybe 3cents per word) would be doable without sacrificing quality.

For book marketing, James relied on his own blog following and email list, guest posts on some big blogs like TechCrunch, a long conversation on Reddit, and a powerpoint on SlideShare (works best for non-fiction, but very powerful for book promotion).

Why Should You Choose Yourself

On the surface, Choose Yourself is closely tied to Creativindie. Specifically, the central idea of the book and James’ view of career stability is dead-on. Companies are downsizing, because they just don’t need as many human employees any more:

In this new era, you have two choices: become a temp staffer (not a horrible choice) or become an artist-entrepreneur. Choose to commoditize your labor or choose yourself to be a creator, an innovator, an artist, an investor, a marketer, and an entrepreneur. I say “and” rather than “or” because now you have to be all of the above. Not just one. An artist must also be an entrepreneur. That’s it. Those ARE your choices. Cubicles are getting commoditized. And when that happens, they empty out. Altucher, James (2013-06-03). Choose Yourself! (p. 26).

I also enjoy the language he uses to describe the end result (What I call “luminosity”):

Instead, igniting the fire on the inside burns a light so fierce it can’t be burned out. Instead, you will brighten the galaxy. You will add brilliance to the lives around you. You will become a beacon, a light that attracts abundance, instead of a flickering fame that is eventually smothered. Altucher, James (2013-06-03). Choose Yourself! (p. 52).

But the book isn’t for everyone. The subtitle reads Be Happy, Make Millions and Live the Dream. Great benefits, appealing to a wide variety of bored and depressed office workers. I’d like to point out some of the excellent lessons, as well as some truly appalling shortcomings of the book, by taking each section individually. (Note: James has 10 other previous books, and you should check them out and probably read some of them).

The first section of the book is devoted to being happy. The author has an unpleasant history, making and spending millions of dollars, having only 2 out of 20 business ventures succeed. He describes himself as an addictive personality. But then one day he decided to “Choose Himself” – stop asking others for permission or approval, and make value out of developing his own story. He did this basically, by starting a blog and developing a following. You can be happy by:

2) Say “no” to everything that doesn’t make you happy.

3) Do a daily practice, which includes being grateful, saying “I love myself” and some other New-Agey sounding spirituality and health stuff.

The Daily Practices seem to be more for depressed people with suicidal tendencies who need a reason to keep going despite soul crushing meaninglessness. As someone who faced anxiety and depression in my early 20’s, then got a degree in Philosophy, found a suitable prescription of anti-depressants, and went into online business, I don’t wrestle with existential problems anymore.

I’m not against his list; they are all very practical things to do to develop a balanced ‘center’, which will then help everything else be more successful, but I’m not in the desperate state where I’m searching for life rafts and daily rituals to cling to. But at least one things on James’ list of daily practice ideas spoke to me: “Say to yourself when you wake up, I’m going to save a life today. Then keep an eye out for that life you can save.” Since making money is mostly about finding a way to help lots of people, this is an excellent rule for business as well as spiritual development.

The next section is more problematic for me. James has a short section on self-publishing, then on finding purpose in your life (his answer: there is no purpose, get over it.) And then we get into small business:

The key is to make money off the grid, to make money outside the imprisonment of corporate America and out of the reach of the powers that choose or reject us. To be able to work from any location. As we move toward the employee-less society, where ideas become currency and innovation gets rewarded more than manual or managerial services, you will have the opportunity to live a life you want to. Altucher, James (2013-06-03). Choose Yourself! (p. 84).

I’m not sure how this works, because you’ll probably be paying taxes etc. for whatever online business you start, but maybe the answers are in his earlier book I Was Blind But Now I See.

Then he gets into the practical aspects. His advice: come up with ideas, make a lot of money, quit your job.

The most important tip was this:

Of course that’s the central issue facing authors and artists (who are making their own products that don’t necessarily help others). But it’s still very true. The way to make money is to help others.

Ask “Who should I help today” and the universe will shower you with gold:

“Become a beacon of enhancement, and then when the night is gray, all of the boats will move toward you, bringing their bountiful riches.”
Altucher, James (2013-06-03). Choose Yourself! (p. 106).

Beautiful writing. I love it! But… what should I really do, to make a ton of money so I can quit my job and focus on helping others?

This is where things get dodgy. James seems to be speaking only to people with a business/entrepreneurial background who are used to dealing with huge sums of money. For example this passage:

Sometimes it’s nice?! As in, one possible method, out of several equally plausible ones, is to just make a million. It’s only a million dollars after all, not so much. But how to do it? Pick a service business. Make it scalable/passive (so you don’t have to be doing all the work, and it can be grown quickly). Start a blog and become an expert on the subject your business is tied to. Then people will come to you to have you solve their problems.

All we are trying to do is make ONE MILLION DOLLARS, remember? Once you have a few hundred thousand in revenues and you start hiring people, sell the business for $1 million. That’s it. There will be plenty of buyers (local ad agencies, bigger ad agencies trying to consolidate, bigger social media firms, small public companies trying to break into the ad space). Altucher, James (2013-06-03). Choose Yourself! (p. 113).

I’m not opposed to making a million dollars. I think it’s a great idea. I’m definitely going to follow this advice and try to do it. But for many indie artists or authors who are just trying to learn how to sell their books and paintings and make enough income to quit their jobs, this advice may reasonably seem insane.

One of James’ Million-Dollar ideas is: “Write a book” because he personally, and several of his friends, have made a million dollars writing books. So he knows it can be done. But tell that to the author trying to sell his first hundred copies. If the million dollar ideas aren’t working, go back to the basics: take care of the physical, emotional, mental and spiritual bodies (the precise number of bodies seems a little confused in the book…)

But his heart’s in the right place. He closes the section by saying, “I’m just trying to get you to do something. Something that can increase your chances of making $1 million.” The next section, however, goes on to talk about how easy it is to make a billion dollars! Just find a problem, and develop a way to fix it. Build your product, sell it to a customer, start shipping…get it on Oprah… then quit your job. (Always keep your day job until your idea is making money).

The rest of the book appears to be some organized but un-chronological blog posts. There’s some fun reading, as James unleashes his zany genius level humor, the writing is entertaining. I didn’t find out what “the dream” is, but something about getting rid of regrets and how to keep trucking despite being stupid and mediocre.

James Altucher’s blog has gotten 10million hits and he only started it in 2010. If you’re a self-representing author or artist looking to develop a platform and make a million of your creative products, he should be one of your role models. Check him out here.