Book marketing lessons from Arnold Schwarzeneggar and Tony Robbins (how to make a bestseller).

This is a long post, because it’s about two very important things that are essential to your successful writing career.

Two things happened recently that you may not know about. 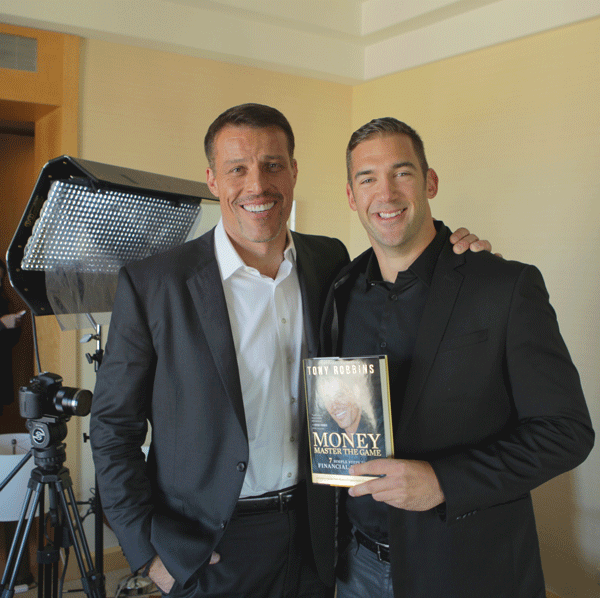 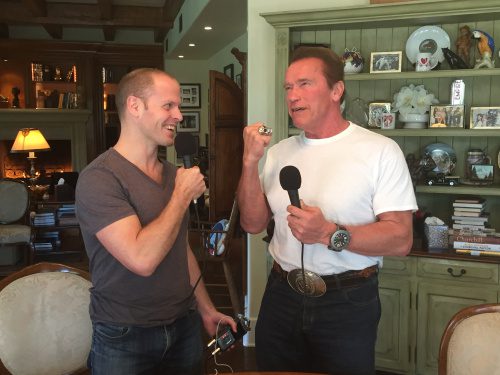 For me these both represent the death knell of traditional media, at least as it pertains to book marketing. Many authors are still chasing radio interviews and newspaper reviews as if it were still 1990.

Tony Robbins and Arnold Schwarzeneggar both have enormous, international fame and prestige, an army of loyal supporters, and millions of dollars at their disposal.

So when they launch a book, pay attention to what they do – because you can be sure they are listening to the best marketing experts in the world and have the resources to literally do anything they want. (If Arnold wanted to make an action video trailer with him jumping out of a plane, fighting ninjas, exploding Lamborghinis to promote his book, he totally could. Instead he chose to do a Podcast with Tim Ferriss).

That’s because book sales these days are mostly about trust. Advertising doesn’t work. Being everywhere (visibility) doesn’t work. You need your book to be supported and shared by someone whom people trust – and that means, if your book isn’t amazing – nobody is going to share it. That’s fine. It’s not their business. You need to write better books.

If your book is good enough for people to want to share it, you need to do more than ask for favors: you need to offer incentives.

I heard the background story of the Tony Robbins interview – Lewis Howes sweated bullets trying to line that up. He was ready to fly anywhere for just an hour of Tony’s time. Sure it was great for Lewis’ career and reputation to land such a huge guest, but more importantly, Lewis was completely dedicated to selling the shit out of Tony’s new book, and he made that really clear, with persistence and determination.

In Arnold’s case, my guess is, he asked his people how to sell books, and somebody said “Get on the Tim Ferriss blog.”  Tim has such a devoted army of followers he’s built a reputation – the “Tim Ferriss” effect – for pushing books to bestseller lists. So maybe Arnold’s people called Tim up and asked to be on the show.

In both cases though, the power dynamic is in flux – these multi-million dollar international icons decided to write books and they needed to make sure the book wasn’t a failure (which it could have been, because they aren’t blogging and don’t have the same kind of intimate trust built up with readers). So they did interviews with bloggers and podcasters who have a big online following.

What does this mean for you?

1. Build up your own power by putting amazing content on your blog for a few years and build a following by offering value.

2. If you have a book, seek out blogs and podcasts in your genre/topic and do whatever it takes to get featured. Remember to give more than you get, and always bring something to the table so you’re not asking for favors.

Lewis’ interview is great and is probably continuing to drive traffic and book sales, but Tim goes a step further, by leveraging the fun and excitement of a contest.

So he did the interview, put up the blog post… now he needs people to share it.

What does he offer?

The prizes include $1000 cash, dinner with him in San Francisco, or a RT ticket anywhere in the world. These are easy prizes to offer, all worth about $1000 (except dinner with Tim, which is priceless).

To win, you need to share the blog post which includes links to the interview, links to Arnold’s books, and gets people back to his blog where they could sign up and become fans. (And then, comment on the blog post to show what you’ve done). Tim’s monkeys will keep track of who is driving the most traffic.

$1000 spent as a contest reward is much more powerful for book marketing than advertising.

Check out the post on Tim’s blog here to see how it works.

What do you do if you have zero platform to start with? How do you announce a contest?

Answer: partner with some bigger blogs. People love contests. Your book has to be good; and promoting your own book seems self-serving so you may want to bring somebody else in. Then think of a great contest and get people involved in something fun.

For the mermaid romance I’m working on, I could get people to submit their best “fake” mermaid pictures and organize the results with a hashtag. I could get them to post mermaid articles or book reviews online. I could get them to write 1000 word mini novellas. Or even just share my content (for content – you shouldn’t just use your book. People don’t want to just shout about a book repeatedly. But if you have a great article that’s useful; or a fun contest or event, that’s a story people will be more willing to share).

Create value, offer incentives that people want, bring something to the table.

The best book marketing in the world is a community effort – so make sure you’re building a community.

Need help launching a #1 bestseller? Grab my FREE book marketing guide and email series, so you can save time and money while avoiding critical mistakes. Click here to reserve your copy.

Derek Murphy is a book editor turned book designer with a Ph.D. in Literature. He's been featured on CNN and spoken at dozens of writing conferences around the world. These days he mostly writes young adult fantasy and science fiction, while helping authors write and publish bestselling books. FREE GUIDE: Sell your work without selling out.
@creativindie
Previous How to set up a website funnel with WordPress to build loyal readers and sell more books.
Next The #1 things most self-publishing authors get wrong (mistakes to avoid).