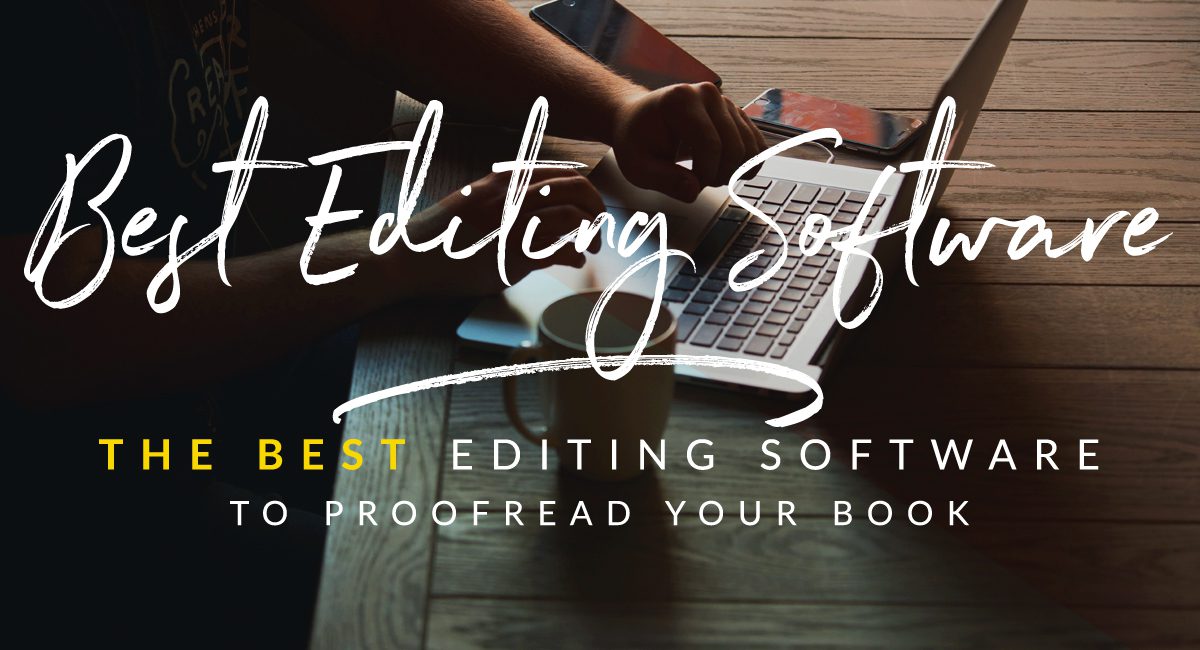 The short version: Grammarly finds more typos and actual mistakes. In a full manuscript, it found 7 while ProWritingAid only caught 1. However, ProWritingAid sometimes catches things that Grammarly misses, and has very useful more advanced features that can help improve your writing by flagging slow passages, complex paragraphs, or repetition. I recommend using both before publishing.

Editing was my first online business, to support me through grad school. I was pretty decent and there was a lot of demand, but I shifted into book cover design, then book marketing, and finally started producing my own books instead of working for clients.

HOWEVER, editing continues to be something I spent a majority of my time doing, as well as the higher-level stuff like rewriting and polishing, outlining and plotting, and fixing broken or poorly written stories.

Everyone’s first draft sucks, including mine, so editing – even if it’s just revising your draft 2 or 3 times until it’s readable – isn’t a skill that’s easy to outsource. Unfortunately, most authors aren’t able to self-edit well because they can’t recognize when a story sucks or the writing is bad, and even if they could recognize it, they aren’t sure how to fix it.

Most writers finish what should actually be an ugly rough draft and immediately go to hire an editor, which can be costly for two reasons.

First, you’re paying for the editor’s time, so the uglier the manuscript, the more work they’ll have to put in to make it readable (instead of focusing on the real issues).

Secondly, EVEN if they clean up your book, they probably won’t fix the story, which means it will be no more satisfying or marketable than it was in the beginning. You’re just getting it up to the barely acceptable point where other people could TRY to read it, before getting bored.

People disagree about various forms of editing, but my understanding is this:

What I’ve usually done when editing for clients, is to do all three: fix absolutely everything I could, including extensive revision and rewriting, restructure paragraphs and chapters, and comment (dozens of comments per page) on things I think could be improved or fixed, but would require significant changes.

The problem with this approach is that authors would need to go back and rewrite, and then I’d need to edit again. With my own projects – now that I’m working with some cowriters – we do it this way:

It still takes me a while, because what I consider “editing” is actually often “writing” – sometimes I’ll add in a sentence or paragraph to clarify an important piece of information, or I may beef up the scene or character description. 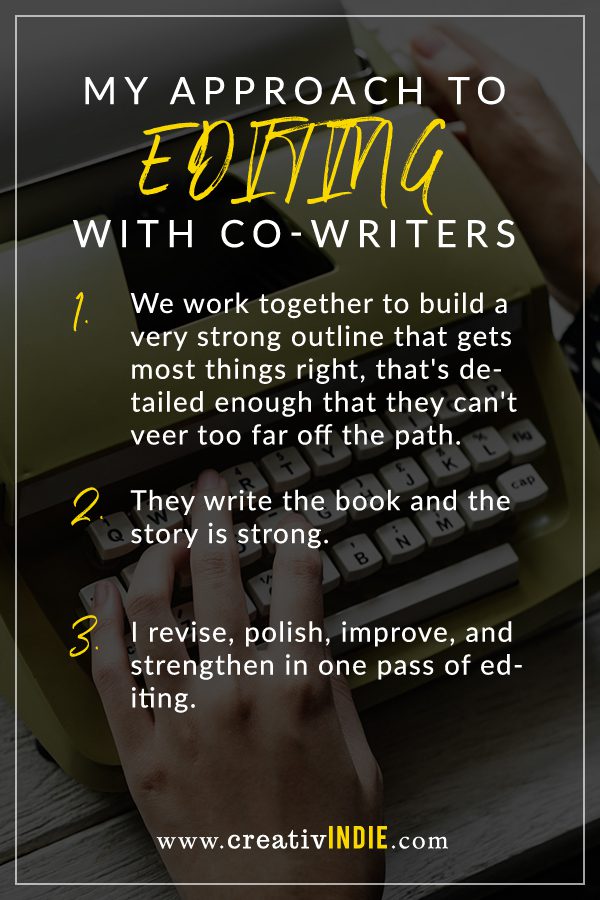 This is OK because I’m co-writing, but I recently saw a thread on Facebook where an author was upset at an editor precisely because they made changes like this: they “fixed” something by adding in new content. The author was upset and many other authors were outraged, and even suggested not paying the editor for all the work they’d done because they’d done more than expected (!).

This is, by the way, the main reason I suggest indie authors can skip editors. If they’re ONLY looking for a proofreader to fix a few typos, they could be using software or beta readers instead.

Otherwise, they’d need to hire an editor that knows MUCH more than they do about writing, plot, story development, etc – which would cost a lot more. The feedback I give clients is invaluable, and I spend a lot of time editing, so I charge a lot and people are happy to pay it.

BUT I usually say the same things to everyone; they are basic things every author should be doing better, involving intrigue, conflict, plotting, character motivation, description, organization, etc.

I don’t like doing the same thing over and over, which is why more recently I’ve been putting out resources to help people learn to write better books. I’m actually super proud of my Bestseller Blueprint course, I think it’s some of my best material.

But it’s hard to learn everything all at once and it’s easier to just pay someone to tell you what’s wrong, or better yet fix it for you, but again – most authors don’t even want that, because they don’t want anyone else to fix or change the story they’ve written – which means they’re paying a lot for basic proofreading that a robot could do.

In that regard… for those authors who aren’t ready to spend the big money to hire a developmental editor to fix their story, I’ve recently been testing the two most advanced editing software for writers, Grammarly and Prowriting Aide.

Personally, I skipped the editor on most of my books and it shows; I get reviews about lack of editing and story mistakes all the time and it sucks, so I’m planning to streamline my process by doing a thorough check with each software before publishing. They can’t fix everything that a human editor would catch, but they do often catch 10 or 20 typos or errors that I missed, making for a much cleaner reading experience.

How to edit your book with Grammarly

You can watch the video above to learn how to use the software, but basically: 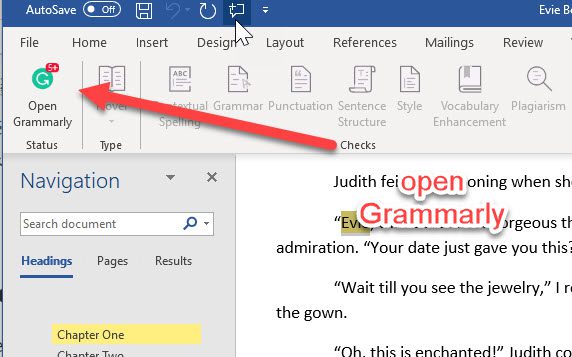 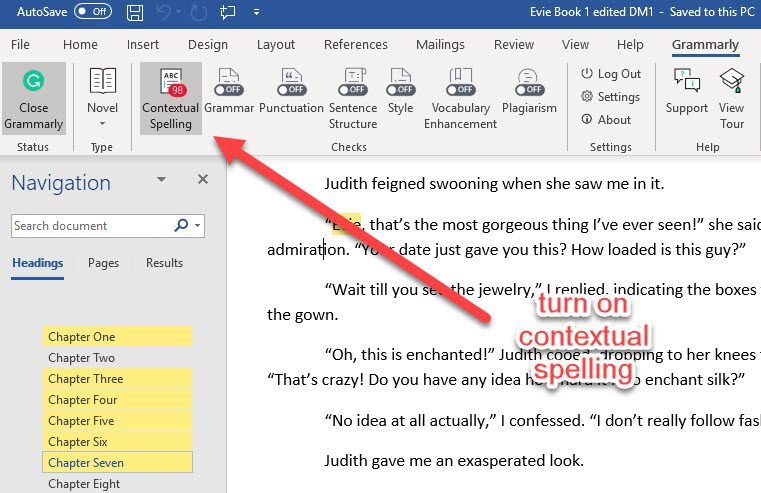 How to edit your book with ProWritingAid

Get ProWritingAide Now (save 25% off with the promo code: MurphyPWA25

Conclusion: Get both, check twice. It’s a nominal fee, if it replaces hiring a more traditional editor, and each might catch something the other missed.

That way, instead of hiring a proofreader, you can instead look for a development edit or a manuscript review, which can actually take a look at the REAL problems that will keep a book from selling.

Ready to hire an editor?

As I mentioned, software is great for proofreading but won’t help you actually fix your story. If you’re ready for an expert, check out The Book Butchers for world class editing. If you’d like a manuscript review of a commercial viability, marketing and competition report, I offer a package of literary services and consulting.

Need to promote and advertise your book?
Click Here