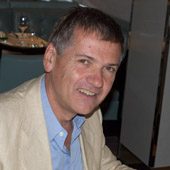 Today I’m honored to host an interview with an author who’s doing amazing things in art and literature. I met David Clarke while working on his book cover for Rare Traits, a fascinating novel that makes use of David’s interest in art history.

Then I found out he’s in Tuscany studying art restoration. Wow – who wouldn’t love to be in the same position?

I wanted to know more about his life in Italy, and he agreed to answer a few of my questions.

A typical day for me, as someone living here in the warmer months from late April until early November, varies with the season. The constants now are writing and choosing my spot for that. I prefer to be outdoors and we have a lovely shaded pergola in the garden near the pool with a couple of vines and a very ambitious wisteria climbing over it.

It’s fifty metres from the house but the wifi reaches and hence it’s a blissful yet convenient place to work. I’m there as I write this, and today, in mid-July, even in the shade and with a light breeze, it’s almost too hot. But with butterflies fluttering around me and the noise of cicadas and birdsong, who want to be anywhere else?

When not writing, there is plenty to occupy me on the land, especially when we first return here in the late spring. We have three acres comprising a cultivated area around a pool – which I admit is my wife’s preserve apart from the grunt work of pushing the mower; a small vineyard that in the season requires regular maintenance; a small olive grove that requires less, and a couple of terraces that I keep in check with a flail mower attached to my Ferrari tractor (different Ferrari!). And in the evenings? well, this is the land of wine…

2. How did you find out about your art restoration program, and what’s it like? 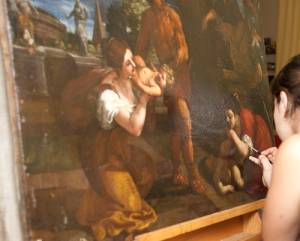 I learned about the restoration program back in the winter of 2005 from advertising posters around Arezzo placed by a local vocational training organisation. I’m not going to name them but frankly, they were just in it for the money. It was the first and I think the last time they included restoration on their list – all their other courses were totally different.

Not only did they not set up a good curriculum with the studio, once they’d got their money, they didn’t monitor the course at all. They also paid the studio peanuts for their input – the course fee per student was around €2700 and the studio received almost none of it.

Having said that, the studio, which was a small outfit in the heart of the historic town centre in Arezzo, tried hard to produce a comprehensive course for the students – they weren’t teachers and it was the first time they had embarked on anything like it. We, as the students, of course knew none of this at the start.

The course comprised twenty-four four-hour sessions on Saturday mornings – most of the students were working in the week – and the class, which started off with about fifteen students of all ages, were all Italian except for me. The course language was Italian and at the time, although I had studied Italian to an intermediate level, my conversational skills were limited. So it was something of a struggle at times.

However, both class and teachers were very accommodating of this odd foreigner in their midst and gradually the mists of incomprehension cleared sufficiently for me to understand what was going on. It helped that I am a chemist by training and hence the technical side of the work wasn’t too challenging. I even found myself helping one of the younger students with her chemistry assignments from her college. 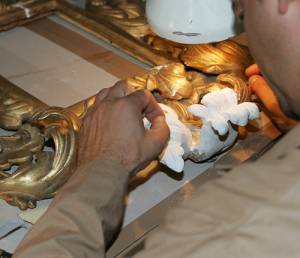 The teachers were two of the four young ladies who ran the studio. One specialised in restoration of paintings and the other, the restoration of gilded and/or painted artifacts – picture frames, religious objects such as wooden cherubs, angels etc, altar pieces and furniture. The painting side of the course was largely theoretical with little hands-on experience, but when we moved on to the gilded pieces, it became very hands-on and good fun.

By the end of the six months, those of us who stayed the course had learned a number of skills but I for one wanted more. So I asked the girls if I could work in the studio once or twice a week voluntarily in order to learn more about the subject. They were happy enough with the quality of what I’d done in class and agreed. So for the next couple of years, I worked there four or five days a month on a number of projects.

These varied from the cleaning, repairing and re-gilding of a large altar tabernacle – it was about three hundred years old and covered in soot, candle wax and insect droppings; a very worm-eaten fifteenth century wooden bust of the Madonna, and a large project in a church in a nearby village that we were all involved in: the cleaning and restoration of a huge wooden altar. I also restored and re-gilded an ornate picture frame that belonged to my mother-in-law. A number of the mouldings were missing or broken and it was necessary to make silicon rubber moulds of various parts, cast new pieces in plaster, stick them on and gild them.

Finally, because the new gilding stood out from the old, all the new work had to be aged to blend in. This was probably about the most satisfying work I undertook, partly because it was all mine; my masterpiece, if you like. 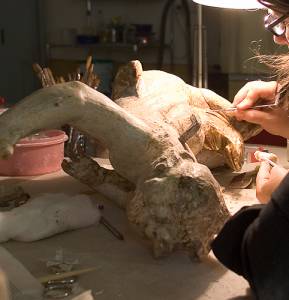 It was about the time I finished my picture frame that my wife and I decided to spend our winters elsewhere – Tuscany is cold in the winter and the studio was freezing! We settled on Thailand with trips to Hong Kong where we had lived and worked for many years prior to retirement. Hence the links with the studio weakened and when I returned from the first winter away, the rules had changed.

It was no longer possible to work as an artisan, even for nothing, without the appropriate registration and qualifications – a PhD in chemistry and thirty years as a forensic scientist didn’t count! It was also about then that the writing bug took hold. My interest in restoration is now limited to reading about it and admiring efforts of true professionals in the churches and galleries around Italy.

3. What advice would you give to anyone wanting to pursue a study in restoration?

Frankly, if you want to do it for a career and you are not living in Italy, I would see what courses are available in your own country, make sure they are well-structured and really teach you the subject well with plenty of hands-on experience. For paintings, if you want to read what is probably the best overview book of the subject, go no further than ‘The Restoration of Paintings’ by Knut Nicolas, published by Könemann. It’s available on Amazon and is a fascinating read. On the back dust cover, there is a wonderful quote from the late German art expert and art historian, Max Friedländer:

“A restorer carries out the most thankless of tasks. At best, his work is totally invisible. If he achieves good results he joins the doubtful company of forgers, and if he fails he joins the despised ranks of art-desecrators. His expertise is invaluable, his deficiencies are all too obvious. A restorer’s work can be judged even less reliably than an artwork – a distinction which says a lot.”

Be sure to check out David’s Book: 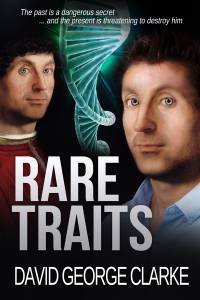 You can visit David Clarke’s author website or visit the book page for Rare Traits.

David posts his overall approach to retirement in detailed on the blog www.retiredandroaming.com.
He also has photo site at www.dgcphoto.com.